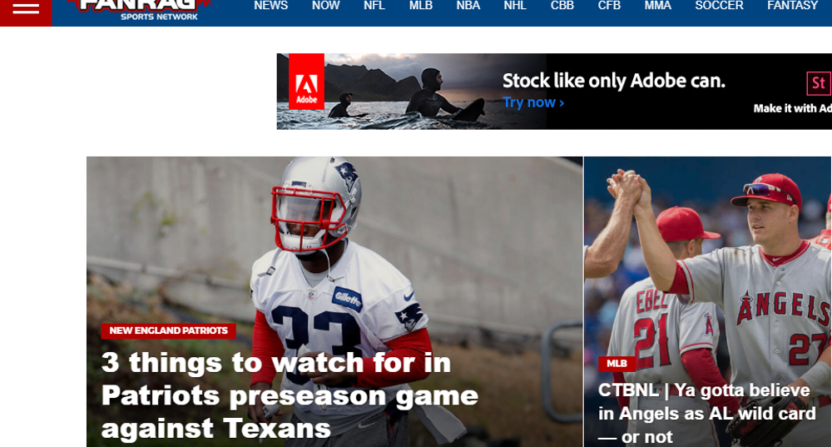 One of the key figures at FanRag Sports has been let go, and so have numerous others who wrote for them. Tommy Stokke, the site’s director of content, announced Friday on Twitter that his position had been eliminated, while basketball writer Joseph Nardone announced earlier in the week that he was let go, and the site also ended their coverage of women’s hockey, parting ways with several writers who covered it. First, here’s Stokke’s announcement:

It’s significant that Stokke is leaving, as he was one of the site’s key figures and someone who really helped them get noticed with hires like bringing in Jon Heyman last summer. Stokke spoke about how he got Heyman on board and much more in an interview with Mike Vorkunov of The 30 in February, and his discussion of how FanRag got started is interesting:

What I didn’t know the first time I went to FanRag.com was how new it was. It was just an idea at that point. The idea at the time of that first meeting was to have a site where fans could go to share their voice. The original tagline was “Be Seen, Be Heard, Be a Fan.” And yes, that’s how the name originally came about.

We kept with that to a certain degree early on, thinking that fans of a team could accurately write about them and write about them in a way that readers would want. But it had to be good. It couldn’t just be random spewing. Sure, they could be a fan, but the quality had to be there. The other part we did was decide right away that every writer had to be paid. For one, we had to get people to write for a site they never heard of. Two, this was during a time when there were stories written every other day about why you shouldn’t write for free, while many sites were feasting on free content. We felt that would set us apart, that the reader knew we cared about the content we were producing because we were paying for it.

…Eventually, we started moving away from the “fan perspective.” Every site says it’s the fan point of view. We weren’t going to be successful by being another fan site or blog. We wanted to be a respected, credible media outlet, so it was time to change.

In that interview, Stokke also talks about his role as content director, and the size of FanRag Sports:

It means I have some fancy title to put on a business card. I say that half-jokingly, but we’re not very big on titles. If it weren’t for business cards or needing a title for credentials and identifiers for other people, I don’t think anyone would have one. But my role is managing the content. I share that role with Jaime Eisner, who is far better than I am. We manage social media, oversee news desk, manage story ideas, work on headlines, quality control, etc. We’re joined by editors for each sport — Carolyn Wilke (hockey), Jason Patt (NBA), Alex Smolokoff (MLB), John Owning (NFL), Kristian Ibarra(MMA/WWE) and Matt Zemek (colleges). They are more hands on with the writing staff. With a writing staff of probably close to 100 across all of the sports, Jaime and I work more with the editors on a day-to-day basis.

All those editors appear to still be at FanRag (at least from their Twitter bios), but the site has parted ways with some other writers. Nardone announced his exit Wednesday:

On the women’s sports front, Mike Murphy tweeted Wednesday that FanRag was ending its women’s hockey coverage (but that he would stay on as a NHL contributor):

Some important news regarding my women's hockey coverage and career.
Please follow & read the work of @SchlagsWrites & @elindsay08. Thanks. pic.twitter.com/RGIyG4cBh0

I'm sure by now, most of you have heard that @DigDeepBSB, @elindsay08, and I will not be covering women's sports at FanRag any longer.

but it is indicative of the turn that sports has taken recently. It has been a year of tragedy and triumph for women's sports. The victory

Won by the women of Team USA was exhilarating-I know those women! I've spoken to them! Laughed with them! The women of UND-I cried with them

I beg all who see this to spend five minutes tonight and research women's sports writers you can follow. Read their work. CLICK THE LINKS.

That's what this whole thing is about. Clicks. The work we've done didn't get enough clicks. Enough traffic. Enough attention.

In women's sports. Because if there isn't a market for it (which is measured in clicks) there won't be a host for it. And then there will be

No coverage at all. And every single woman who has strapped on a skate or a cleat or a goggle or a whatever DESERVES BETTER.

They all – each and every sweaty, desperate, crying, joyful, painful one of them – deserve your time.

And Ayala also expressed her thanks for the opportunity, and her disappointment that the site’s women’s hockey coverage was ended:

Wanted to thank everyone for the love being sent my way. Can't thank @SchlagsWrites & @DigDeepBSB enough for letting me tag along for a bit

Not what we feel our work on behalf of women's hockey deserves, but it is on me to learn and grow from the opportunity. I look forward to it

So, that adds up to some big changes at FanRag. There are still lots of writers and editors there, but the site eliminating Stokke’s role is particularly interesting, given how he had been there since before they launched and had helped them grow and bring in credible names. It’s also notable to see a prominent basketball writer like Nardone let go, and to see the site get out of covering women’s hockey entirely (especially, as Wollschlager notes, because they’d been one of the few sites really doing intensive coverage of the sport). Hannah Bevis, the site manager of SB Nation’s The Ice Garden (and a former FanRag writer), had a thread on how disappointing it was to see this happen, especially in an Olympic year:

This is the worst kind of news. I just…this is awful. https://t.co/QtNakh6hxO

.@k_cimini and I were the first whcky writers at FanRag, and now to see it shut down whcky coverage completely before an OLYMPIC YEAR…

Places where ppl can get paid to write about women's sports are few and far between. Seeing one of those opportunities gone is heartbreaking

Support writers who cover womens sports, whether that's financially or reading their work. Bc there aren't many places that do support them.

Changes at FanRag come in the wider context of layoffs of writers (which, this year alone, have happened at Bleacher Report, SI, Yahoo, Fox Sports, Vocativ, MTV, Mic and more). But all of these moves are notable, and they perhaps show a bit of a shift in direction for FanRag; at the least, they’ll have a leadership change with Stokke’s exit, and they aren’t going to be covering women’s hockey any further. We’ll see where they go next.