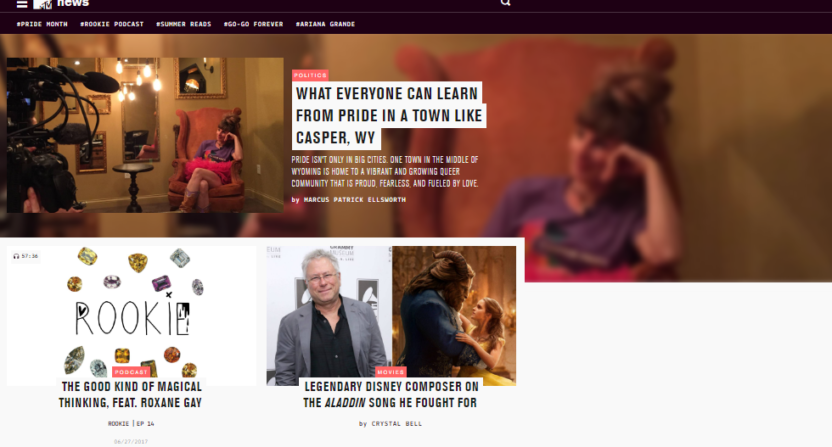 Following in Fox’s footsteps, the latest site to announce major layoffs as part of a shift in focus to video is MTV. In November 2015, soon after ESPN closed down Grantland, MTV News looked to rekindle some of what had worked for that site, hiring former editorial director of Grantland Dan Fierman as its own editorial director. Several Grantland editors and writers joined Fierman, including Holly Anderson, Molly Lambert, Alex Pappademas, and Brian Phillips, and the site also added plenty of other big names from the news and culture world and started focusing on original journalism covering politics, societal issues, culture and more, and doing so in a variety of formats (including written longform, podcasts, and video pieces). That approach has now come to an end, though, with Variety‘s Daniel Holloway breaking the news of a MTV reorganization Wednesday in the wake of Fierman’s April departure:

MTV News is being restructured with an eye toward creating more video and short-form content for a younger audience, Variety has learned.

The move comes seven months after Chris McCarthy was named president of MTV, and on the heels of a reorganization of the network’s linear-programming department. The transition will see resources shift from long-form journalism to the development of short-form video pieces.

Among the most significant changes — MTV has reached an agreement with the Writers Guild of America East to represent MTV News staff members. As part of that agreement, MTV News is parting ways with fewer than a dozen staffers and several freelancers. The news division is in the process of hiring additional personnel to focus on video and short-form content.

Billboard‘s Andy Gensler has a statement on where MTV is going with this:

Sources tell Billboard the new restructuring will included a stronger emphasis on video rather than a focus on reporting and longform.

“With MTV News, we’re doubling down on where we’ve seen our biggest successes in youth culture, music and entertainment,” an MTV spokesperson said in a statement provided to Billboard. “While we’re proud of the longform editorial work from the past two years, we’re returning the editorial operation to its roots of amplifying the audiences’ voices and shifting resources into short-form video content more in line with young people’s media consumption habits.”

And that Billboard piece also notes the turnover in MTV’s executive ranks during this period:

Presiding over the network’s reboot in 2015 was then-president Sean Atkins, who had headed Discovery’s digital network before taking the reins the previous September from MTV vet Stephen Friedman. According to Nielsen, MTV had seen a 23 percent ratings hemorrhage the year before Atkins came in.

…Fierman answered to no less than five bosses in his 16 months at MTV: Friedman, who hired him, was gone before he’d started; he was followed in succession by Colin Helms, Kristin Frank, Erik Flannigan and, most recently, Garrett English.

Some of those affected by the layoffs tweeted about them Wednesday:

I've been laid off by @MTVNews. I'll miss seeing my brilliant, talented colleagues, and I look forward to continuing my career elsewhere.

MTV News as we knew it no longer exists. This means new things for me as well.

MTV News just let go of a lot of newsroom folk. I'm one of them. And it really hurts cuz this was a dream for me for a loooong time.

People have been rightly pointing out that the MTV team produced awe-inspiring work this past year. They did. But here’s the thing. /1

My heart aches for the things we could have done. /3

The first is that I've been laid off by MTV News. This is…fine, basically.

like others, I was told that today would be it for me at MTV News. It has been quite a ride, and I'm proud of the work I did there.

Abdurraqib also had his own poignant commentary on the “shift from writing to video” narrative:

I am, literally right now, at a residency teaching a large group of eager, teen writers who still search for & are moved by language.

Not giving credit to the limitless emotion and thoughtfulness of young people fails not only them, but also the imagination of the critic.

And Anderson shared a story of how the affected staff learned after the media, and how it came right as they were publishing a video piece they were particularly proud of:

Casper is Matthew Shepard’s hometown, and this year, they held their first-ever Pride parade. https://t.co/hJApff5QOC

Treasure in the form of strong activists, supportive civic and religious leaders, and, of course, jackalopes. https://t.co/hJApff5QOC

But the point is the story. Here it is. It’s beautiful. Look what @HarlequinTears can do. https://t.co/hJApff5QOC

Marcus Ellsworth (the aforementioned Marcus, who wrote the companion piece in addition to his involvement in the video) chimed in on that too:

The best damn thing I've ever done. Published on my last day at MTV News. https://t.co/mgIM41No7Y

And former Grantland colleague Jonah Keri (now at CBS and SI) weighed in on the talented cast let go:

These are just the latest prominent media layoffs (we’ve seen significant ones at ESPN, SI, Bleacher Report, Yahoo and Vocativ this year, in addition to Fox). The Vocativ, Yahoo and Fox cuts all happened in the last two weeks. These are also just the latest cuts that discuss digital sites trying to emphasize video.

That’s far from a surefire winning strategy, though, as a look at what sort of content Fox’s new video-focused site actually has indicates. Just saying “we’re going to do more video” isn’t necessarily a winning approach, especially when you consider that there are plenty of people who don’t want to watch video. And MTV News had a lot of talented writers doing excellent work and boosting the site’s reputation as a place to go. It’s unfortunate to see these layoffs, one more indication of the growing deemphasis on quality written content across media properties.