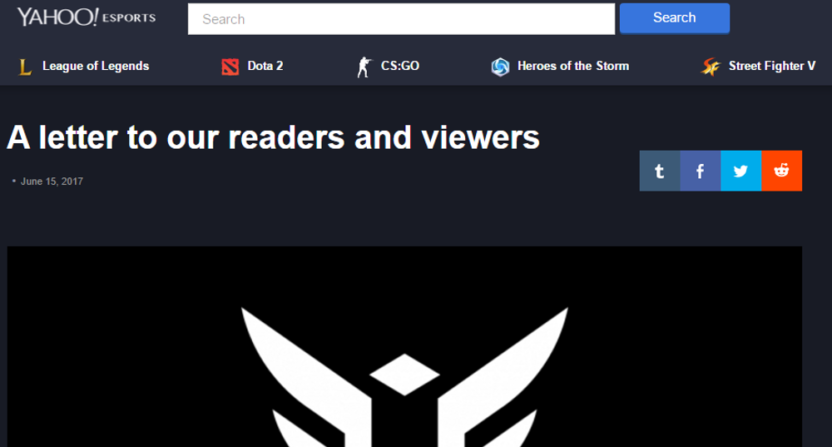 The company also said that it’s shutting down its esports site. Yahoo head of esports media Travis Gafford announced in a letter to readers Thursday that the site would no longer be updated after Friday:

Unfortunately, Yahoo Esports will no longer be updated after this Friday (June 16th). As Yahoo Sports becomes part of Oath, they are focusing on aligning with the new company strategy and are focused on growing the Yahoo Sports brand.

…First, I would like to extend my gratitude to all the individuals at Yahoo who decided to make esports an initiative at the company. From the folks who presented and approved the idea, to the engineers and project managers who built the site, and the Yahoo Sports team who hired the first few members of what would become our media team.

Additionally, I want to thank the esports community. As is often the case, there was a great deal of skepticism when a large company entered the esports space. You challenged us to create authentic videos and articles from familiar faces and names. With the help of teams, players, leagues, and publishers we strived to provide you engaging, entertaining, and informative content. In turn, you embraced us across Smash, CS:GO, League, FGC, and many more communities. Your passion and support drove us.

Finally, there is no possible way for me to thank my amazing colleagues enough. Speaking personally, Yahoo Esports was my first chance to lead a team. To say I got hard-carried by our incredible producers, writers, editors, and social media folks would be a vast understatement. All of them invested their long hours, passion, and endless creativity into this endeavor. If I have a chance to work alongside any of them again in the future, I will take it in a heartbeat. You’ll be hard pressed to find better women and men for positions in this industry.

I hope Oath continues the tradition of Oktoberfest mugs. Sadly, I won't be around to find out.… https://t.co/MIaYGz1YhI

I was among the Yahoo layoffs yesterday, although I'll still be contributing at @YahooBDL for a few weeks.

.@KDonhoops basically invented the dominant mode of internet basketball writing and you should all inundate him with offers.

And I'm not really sure what else to say right now, or what comes next for me. At least my profile pic looks less like a mugshot now.

Yahoo has informed me that after 9 years my last day w/Puck Daddy will be July 14.

Add me to the summer UFA list. Until then, let's party.

As Gaffard’s letter noted, these layoffs are part of the larger changes involved with Verizon taking over Yahoo and combining it with AOL/The Huffington Post for the newly-dubbed Oath. That’s expected to involve 2,100 layoffs in total across Yahoo and AOL, and 39 Huffington Post union members were laid off as part of that move Wednesday.

The shuttering of the esports site is a particularly notable move, as that’s such a new initiative (it was launched in March 2016) and one that so many other sports media companies have been getting into. Other companies with esports verticals include The Score and ESPN, while Vox’s Polygon launched three new game-specific communities last week, and Turner has been diving into esports with their ELEAGUE broadcasts. All indications are that esports is a growing market. But it’s possible that the vertical it wasn’t producing the traffic Yahoo hoped for, or that it was deemed more expendable than other more-traditional sports coverage.

It’s going to be interesting to see what Yahoo Sports as a whole looks like after these changes, though. While AOL and The Huffington Post aren’t all that sports-focused, meaning that there may be less overlap than there is with other sections being integrated, it’s clear Yahoo’s sports section is still facing some big cuts. And one of the biggest appears still to land, with Adrian Wojnarowski (and probably some or all of The Vertical’s other writers) reportedly heading to ESPN after the NBA draft.

We’ll see what the new-look Yahoo Sports is like. They’ve already lost a lot of well-known, well-respected and popular writers and editors, and more may be heading out as well. There still are plenty of impressive people at the company, and their traffic has still been solid, but it will be worth watching how that’s affected by some of these recent changes.