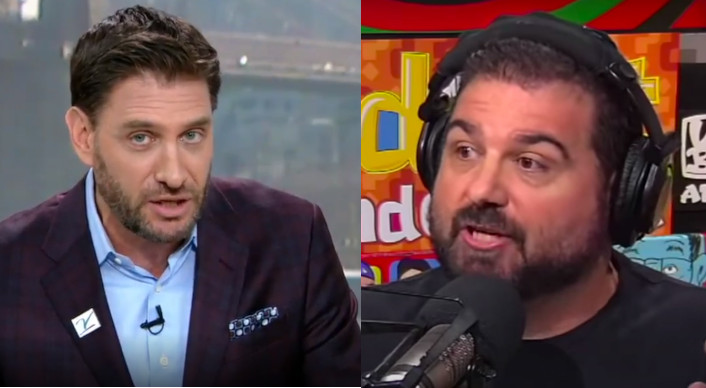 Some of the long–discussed changes to ESPN Radio are set to officially kick in. Following Will Cain officially exiting ESPN for Fox News late last month (two months after Andrew Marchand of The New York Post reported that was expected to happen), and following the early-June report from Ryan Glasspiegel and Bobby Burack at Outkick that Keyshawn Johnson would likely shift from his ESPN LA role to a national ESPN Radio morning show role (and the late-June report from Marchand that Johnson was in fact doing that), ESPN officially unveiled their new national lineup Tuesday, with that lineup set to start August 17. And the new lineup comes with some big shifts, including Mike Greenberg returning to the radio airwaves with The Mike Greenberg Show, which will air from noon to 2 p.m. Eastern daily (and shorten The Dan Le Batard Show with Stugotz to 10 a.m. to noon, rather than its current 10 a.m. to 1 p.m. runtime).

Beyond that, the morning 6 a.m. to 10 a.m. Eastern slot will see the end of Golic and Wingo. And co-hosts Trey Wingo and Mike Golic Sr. are nowhere to be found on the daily radio lineup. (The contracts for both Wingo and Golic are reportedly up this year, and Marchand wrote in April that it looked like Wingo was looking to leave morning radio even if he stayed with ESPN.) Instead, that 6-10 a.m. slot will see Johnson co-hosting Keyshawn, Jay and Zubin with Jay Williams and Zubin Mehenti from 6 to 10 a.m. Eastern.

There are notable moves later in the day too. Chiney Ogwumike will join Mike Golic Jr. (who had held a regular role on Golic and Wingo alongside his father) to co-host Chiney and Golic Jr. from 4-7 p.m. Eastern, and with Jason Fitz joining Sarah Spain from 7-9 p.m. Eastern. Fitz had co-hosted with Spain before, but was most recently hosting afternoon First Take radio spinoff First Take, Your Take). Spain was most recently hosting Spain and Company from 6-9 p.m. Eastern.

Perhaps the most significant changes from the current schedule come in the middle of the day, where The Dan Le Batard Show with Stugotz will lose its final hour in favor of the new The Mike Greenberg Show (which will now air from noon to 2 p.m. Eastern). There’s also the new The Max Kellerman Show, which will run from 2 to 4 p.m. Eastern (replacing part of First Take, Your Take and part of The Will Cain Show, which currently is filled by ESPN Radio Afternoons). Kellerman had previously hosted radio shows for ESPN in New York and Los Angeles, but this is his debut with a national ESPN Radio show. Here’s a side by-side look at the current schedule (as of today) next to the new as-of-August lineup: 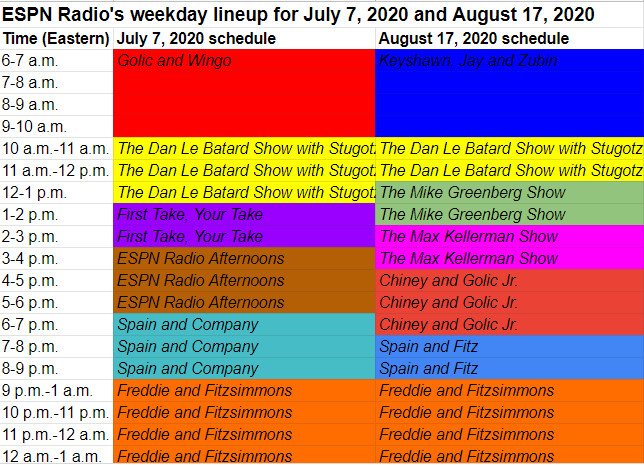 These changes have already drawn some interesting reaction. In particular, the decision to shorten Le Batard’s radio show in particular (his Highly Questionable TV show will continue on ESPN at 4:30 p.m. Eastern weekdays) to make room for a new radio show from Greenberg took some criticism on Twitter Tuesday, including from famed TV showrunner (and Fire Joe Morgan figure) Michael Schur:

It's vitally important in these times of social unrest and zero sports that @ESPN reduce the air time of its most popular and relevant radio show and podcast, in order to make room for the no-sports to be not-discussed by less-diverse groups of people who have less to say. https://t.co/1v4i2arqTU

And many Le Batard fans weighed in as well:

You guys are clowns, the people do NOT want less Dan le Batard! Hes the best show on your lineup and can hold his own in a time with no sports! Stop this.

Dan Le Batard has played a huge role in launching the careers of some of Espns brightest young stars, and now they want to cut his air time

“The Dan Le Batard Show with Stugotz” is being reduced from three hours to two in the 10:00am-noon slot, leading in to Greenberg’s show.

WOW. UNREAL. For that fucking dope.

I definitely don’t appreciate one less hour of the Lebatard Show for Mike Greenberg ? https://t.co/ijtjU7enks

There was some talk back in April that Le Batard might wind up off ESPN Radio entirely, and that didn’t happen, but it’s interesting to see his show (which, apart from the late-night Freddie and Fitzsimmons, is the only show carrying over in its exact current form) cut down. Le Batard did prompt some discussion last summer with his commentary on “Send her back!” chants directed at U.S. congresswoman Ilhan Omar at one of U.S. president Donald Trump’s campaign rallies, and while he wasn’t suspended, he was called to ESPN’s Bristol, CT headquarters for a meeting with company president Jimmy Pitaro. Greenberg will obviously be a much safer choice, with his old Mike and Mike show earning “Mickey and Mickey in the morning” criticisms from Colin Cowherd for how league-friendly it was. In fact, Greenberg himself has frequently pushed back on any suggestion that he wants to discuss anything remotely connected to politics on the air.

And while Greenberg’s current Get Up TV show does sometimes feature quite the takes, to the level where AA’s Joe Lucia dubbed it “Mike Greenberg’s Morning Hot Take Parade,” many of those come from the guests. And while Greenberg himself has dropped in notable takes as well from time to time, many have those have been strange takes on teams and players, with others being exceptionally league-friendly readings of situations (such as his May remarks blaming MLB players’ “negotiation tactics” for a deal not being reached quickly; Greenberg apparently got his reported $6.5 million annual salary just by accepting corporate dictates). So he certainly seems unlikely to cause any notable blowback for ESPN in this spot.

This also is an interesting footnote in the long Mike and Mike saga. That morning show, with Greenberg and Golic Sr., was an ESPN Radio staple from 2000-2017 and led to them being inducted into the National Association of Broadcasters’ Hall of Fame in 2016. But it ended in November 2017 after a long batch of leaks about Greenberg wanting to leave for a TV-focused job and the “poisonous atmosphere” on the show as a result, and Golic’s son Jake called ESPN management “idiots” for blowing it up.

And Jake Golic had a point. Radio replacement show Golic and Wingo never did as well (despite some ESPN executive claims) as its predecessor, and Get Up got off to a really rocky start. Its ratings improved after the first few months, and some further cast changes seem to have worked out okay for it, but it certainly hasn’t been a world-beater, And it’s debatable if it’s been worth what they’re paying Greenberg (in particular) and others, especially after you factor in the changes it led to on the radio side.

But hey, at least Greenberg is doing more now. His I’m Interested podcast only lasted a few months in 2018, and while he’s done things like hosting the occasional SportsCenter special and so on, his main ESPN work since Mike and Mike has been Get Up. Now, there will be more Greenberg available to ESPN viewers and listeners daily. Whether that’s a good thing or a bad thing depends on the listener.