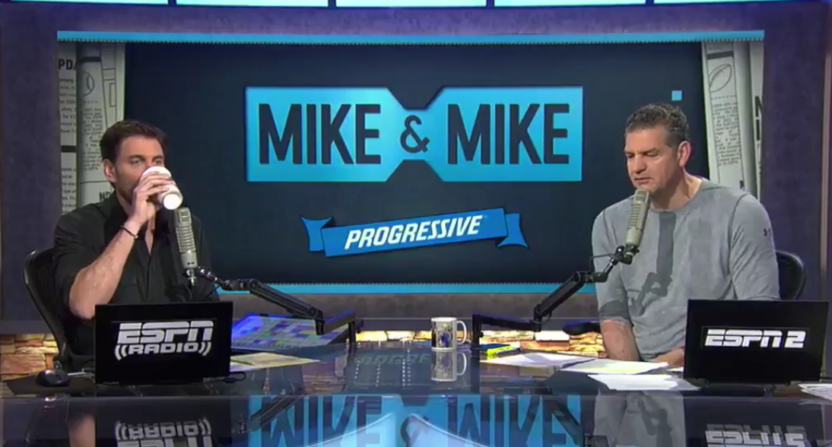 ESPN Radio’s Mike and Mike will eventually come to an end this year, with Mike Greenberg moving on to host his own morning TV show on ESPN and Mike Golic staying on radio (with a simulcast on ESPNU, not Mike and Mike‘s ESPN2) with his son and Trey Wingo, but that end may be sooner than expected. Greenberg’s new TV show isn’t scheduled to debut until January 2018, so the presumption was that he’d stick with Mike and Mike through its contractual run (it’s believed to end in December). SI’s Richard Deitsch reports that tensions between the hosts may lead to the show ending before that.

Update: Reader Daniel Ormsby notes that Golic and Wingo’s show was announced as “later this fall” in ESPN’s release earlier this month, so it seems very clear Mike and Mike won’t run until December. Here’s more from Deitsch on the tensions there:

“It’s really a poisonous atmosphere right now,” said one longtime ESPNer who has worked on the show. “Most of us don’t see the show lasting through its contractual end [which is believed to be the end of December]. But I give both these guys immense credit because when the light comes on, you would not know what’s going on. They are pros on air.”

“They are marvelous actors on set,” said another ESPN on-air staffer, who speaks to both Greenberg and Golic. “But they barely even make eye contact with each other these days.”

“They virtually ignore each other off air,” said a third ESPN staffer who has previously worked on the show and said such tension has existed since late last year.

It’s understandable why there are some tensions here, as these two have essentially already broken up and are still forced to work together every day. And there’s even more to it than that, as for one thing, Greenberg signed a new deal last December and is now one of ESPN’s top-paid personalities, making a reported $6.5 million annually, while Golic signed his own extension in April, but is believed to be getting much less as a radio-focused guy. For another thing, Deitsch’s piece says news of Greenberg wanting to move on to TV took Golic by surprise, with one source saying “From Golic’s perspective, he thinks Mike [Greenberg] should have come to him and told him he wanted to do his own thing.”

It’s also conceivable that Golic feels this opportunity should have included him, as the proposed move of Mike and Mike to New York City (which was announced in May 2015 and planned for February 2016, but never actually came to fruition) would have resulted in a similar morning-talk style show to the one Greenberg’s now getting while keeping the two Mikes equal. It would be hard to go from being told you’re equally valued and a key part of ESPN’s future plans to having those plans not come through and then having your long-time co-host (Mike and Mike is in its 18th year) get a similar opportunity without you. (And it’s worth noting that Golic is also getting a demotion in network, with the new show’s simulcast starting on Mike and Mike‘s current ESPN2 but then eventually moving to lower-profile ESPNU.)

On Greenberg’s side, though, this is also understandable. Yes, you can make an argument that he should have told Golic he was exploring this opportunity before Golic found out through the media, but there’s an argument for holding off there too; what if it had fallen through, as with the Mike and Mike move to New York? In that case, Greenberg would have created potential tension over nothing. And it’s hard to blame Greenberg for being willing to take a massive pay boost, great creative freedom and the chance to be one of the faces of ESPN. Golic may be annoyed that he wasn’t included, but was Greenberg supposed to just turn a chance like this down? If ever there was a time to use “It’s not you, it’s me.”

In any case, it’s definitely believable that there are some tensions between the two. Even their joint on-air statement about what was next last week felt pretty awkward, with them not even looking at each other:

“The last year and a half have been interesting if not eyebrow-raising, as well. For me, it’s not my story to tell. I’m going to continue doing this exact same show. It’s for others to tell who made this decision if they want to tell it and how they want to tell it. Not my story to tell… So, basically as Greeny said, this show will go on for a while. We don’t know how long into this year, and then as I start a new show with Trey Wingo—who I’ve known for years, I’ve done football with since 2003—and my son Mike, so how could I not be excited about that?”

We’ve seen the Golic family be salty about this too, with son Jake in particular calling ESPN management “idiots” and complaining about the year in advance notice. And really, that’s the most legitimate complaint here. With it clear this on-air marriage is ending, why does ESPN feel the need to keep these two working together for so long? They’ve already had the somewhat-ugly public breakup, and yet they need to keep hosting a show together every day?

The exact end of the show is uncertain, as a company spokesperson told Deitsch only “Mike and Mike will continue into the fall. Still, months more of this don’t seem particularly sustainable, even with Greenberg and Golic being professional on-air. Why not jump to Trey, Mike and Mike sooner, and put Greenberg to work elsewhere? We’ll see how it goes, but reports like this of awkward behind-the-scenes tensions and a “poisonous atmosphere” certainly don’t seem likely to extend the show’s run.