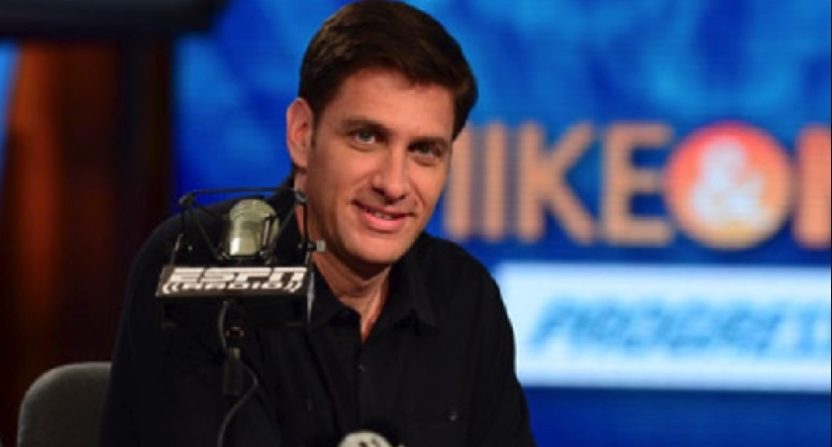 ESPN revealed its 2018 lineup at Tuesday’s Upfront presentation. Most notable was what was absent: SportsCenter. Less than five years after ESPN invested nine figures in a new studio for wall-to-wall flagship coverage, live SportsCenter will not be on the main network before 6 p.m. ET. Even that show is a hybrid, born from one of the network’s many discussion shows.

How ESPN moves forward is a question. The answer, in the morning at least, is a curious one: Mike Greenberg. His long-mooted morning show will debut January 1, 2018, from 7 a.m.-10 a.m. ET on ESPN. ESPN will base it in Manhattan. That’s about all we know about it.

Show elements, per ESPN, are “currently in development.” The WWL is promising “several co-hosts,” a “rotation of various guests and expert contributors,” and a “lively mix of news, opinions, and analysis.” ESPN senior VP Connor Schell says the goal is “to create something truly unique with Mike.”

Ignoring the unnecessary modifier for “unique,” that’s a tough ask. The immediate thought raised by a Mike Greenberg show is “Why will anyone watch that?” The announcement raised so much excitement it didn’t even last a day on the front page of ESPN’s PR site.

This is not a knock on Greenberg. He’s a smooth broadcaster. He has stewarded a quite successful radio/simulcast franchise. But a branded show for him seems to be a move in opposition to the direction ESPN and the rest of the industry are taking. At a time where Stephen A. Smith is the face of the network, ESPN is making a major (reported salary north of $6.5 million) bet on one of its most vanilla personalities.

Greenberg, in many ways, is a holdover from a previous iteration of ESPN. He’s the straight man who is super-enthusiastic about sports. He’s a relentless professional. He’s remarkably non-incendiary. He’s almost the antithesis of a take artiste. Is he a natural draw for target demographic viewers? Does he draw an audience away from Trey Wingo replacing him on basically the same radio show?

From the ESPN description, the show sounds a lot like the “Mike & Mike” morphing into “Sports GMA” vision ESPN presented in 2015, before nixing it. One could see Greenberg slotting seamlessly into a George Stephanopoulos role, down to the side part. Such a show could, in theory, appeal.

By January 2018, people may clamor for a morning TV show with a near-zero chance of the latest Donald Trump trainwreck getting brought up. There may be space for a SportsCenter reinvention, before the inevitable move to on-demand streaming.

That said, such a show is a vision with many potential pitfalls. The show needs the right balance. A too buttoned up “lively mix of news, opinion, and analysis” with ESPN experts popping in is going to read exactly like the SportsCenter it is de facto replacing. There’s danger of going too loose as well. Something too freeform will come off like the “ESPN personalities sitting around watching the game” shows that haven’t quite panned out or Crowd Goes Wild.

They must produce viral elements to work in 2017, which won’t be easy. Greenberg is unlikely to set the table for the sports day with one of his strong opinions. He did not garner a reputation for particularly provocative interviewing on Mike & Mike. As we saw with Bill Simmons’ Any Given Wednesday, it’s hard to rely on interviews to produce those. You won’t get a raving Ben Affleck every day.

ESPN getting the supporting cast right will be critical. Co-hosts will have to be younger. The show will need some edge, even a muted, morning show form of it. Does the WWL pull the trigger and bring in Katie Nolan as the Sporting News floated a few months ago?

Most critical will be having a clear, coherent vision Greenberg can execute. If we’re still only getting vague statements about Greenberg understanding the morning landscape and promises the show will be “lively” by December, that won’t be a good sign.