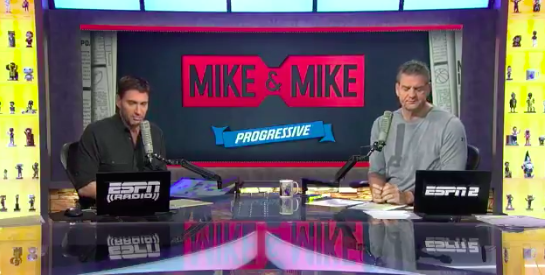 After months of knowing that it was going to happen, it was finally officially confirmed by ESPN yesterday that Mike Greenberg and Mike Golic would be going their separate ways after nearly 20 years on the air together.

Golic will stay on the radio and be joined by new partner Trey Wingo for a new show with his son Mike Golic Jr. also playing a part. The radio simulcast will move from ESPN2 to ESPNU amongst the ESPN “family of networks.”

Greenberg will be given a bigger television spotlight as the new host of a new ESPN morning show centered around him to be joined by a yet-to-be-named cast of thousands.

With the announcements happening yesterday, Greenberg and Golic finally addressed the situation on the air this morning about the coming end of Mike & Mike. While both were looking forward to new opportunities, you can tell there’s a sense of somberness from both that Mike & Mike is coming to an end.

The success of Mike & Mike is undeniable, no matter your feelings about the program. I can’t think of too many people, even the biggest optimists within ESPN, that could have imagined a near 20 year run when they matched a SportsCenter anchor and former NFL player together with the same first name. The pair have been an ESPN staple on the radio and on television going back to the start of this millennium. Kurt Warner and the Rams were winning the Super Bowl over the Titans when Mike & Mike started, that’s how long they’ve been on the air together.

The transition on the radio side should be rather seamless with Wingo coming in to replace Greenberg. On the television side, ESPN is making a huge bet on Greenberg to reinvigorate their mornings on ESPN as a flagship program. Time will tell if they have the same success apart as they had together.