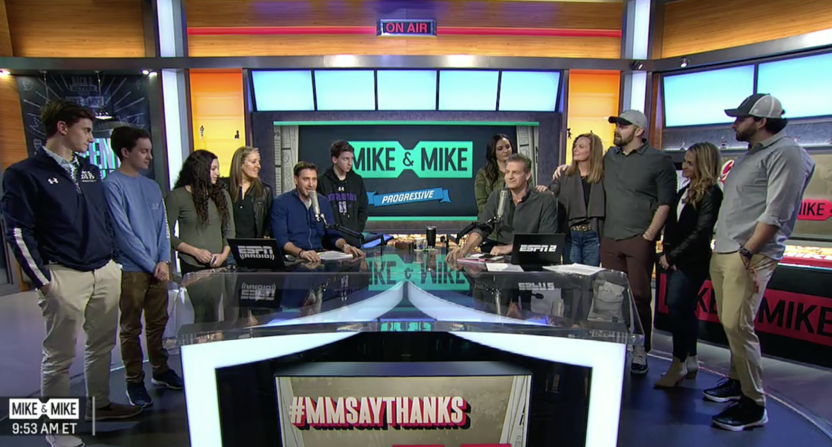 Friday truly marked the end of an era for ESPN and ESPN Radio. After 17 overwhelmingly fruitful years together, Mike Greenberg and Mike Golic aired their final episode of “Mike & Mike.” Greenberg will now prepare for his new morning show, “Get Up,” which is set to debut April 2, while Golic will carry on with the radio show, alongside Trey Wingo.

In their final moments on air, Golic and Greenberg summoned their families to the set, then signed off by thanking their viewers.

Greenberg: The most important words I can think of are “thank you.” Thank you to all of you for choosing this all these years.

Golic: Yep, thank you very much. As Greeny said, we’ll be around. I’ve got a week, but I’ll be around, and he’ll be around in a few months, but this is the last time we can sign off together.

Greenberg: Final words, from our families to yours: Thank you.

Golic: Thank you very much. Mike and Mike signing off.

Golic and Greenberg’s final show was somewhat of a monument to their 17 years of partnership. Greeny opened the show by estimating the two had done 14,000 hours of radio together. Later, ESPN president John Skipper joining the final hour to reminisce and announce the construction of a playground in the hosts’ honor.

It was nice to see Golic and Greenberg enjoy a joyous send-off after a series of reports last spring suggested they no longer spoke off air and that the show could end prematurely as a result of their personal discord. The two hosts persistently denied any acrimony and lamented how the story played out publicly, but there was enough smoke that it was fair to worry the show would end unceremoniously.

Instead, one of the most successful radio shows of its era got to celebrate its final episode, a remarkable 17 years after Greeny’s joke about the No. 10 christened the partnership.

As you might expect, numerous current and former ESPN colleagues congratulated Golic and Greenberg on their final show and thanked them for nearly two decades of morning entertainment.

An incredible run for two wonderful friends. As a proud @ESPNRadio alum thanks to @MikeAndMike for all the good times over 18 years and best in the next chapter for both of you. #MMSayThanks

(1/2) Sending hella love to @MikeAndMike on their final day. Thank you for all the moments and laughs. We can never repay you for helping us pull off the greatest thing ever done at ESPN https://t.co/CmVfGTr0ln

(2/2) What you’ve done in our business is special and rare. Thank you for willingly extending your platform to us as Mike and I built our brand. I love you both and I’m truly honored to be your colleague @MikeAndMike

@MikeAndMike Man when I got that first assignment to Mike and Mike I couldn't believe it!! What an honor it has been to do shows with two Legends!! @Espngreeny & @espngolic You guys have set the bar so high for any duo trying to follow you

I began my tenure at @ESPN in 2007 doing SportsCenter updates for @MikeAndMike. A HUGE thanks to @Espngreeny & @espngolic for being so kind…from back when I was a scared “rookie”…thru today. Your true value to our company simply cannot be quantified. CONGRATS! xo

Congrats to @MikeAndMike on a helluva run. 18 years is impressive in any industry, but especially in radio & TV. I always had a great time whenever I did the show. Hats off to @Espngreeny @espngolic & the entire staff of that show. #MMSayThanks pic.twitter.com/p8cGx3Fv1F

Gonna miss this duo. It's hard to have sustained success in any business & @MikeAndMike's run has been truly epic. They took pride in greeting each day w/warmth & wit. And for a year, they welcomed me to their show w/respect & kindness. Bravo & all the best, guys. pic.twitter.com/bu6FbGLlgD

Thank you @MikeAndMike for Informing us and making us smile over the years. Your chemistry will be missed. #MikeAndMike pic.twitter.com/Vm12yvZChP

As Golic said in Friday’s close, this is certainly not the end for either he nor his (now former) partner. Greenberg will be on ESPN every morning, alongside Michelle Beadle and Jalen Rose on a talk show built around him, while Golic will take a week off, then team with Wingo beginning on Nov. 27.