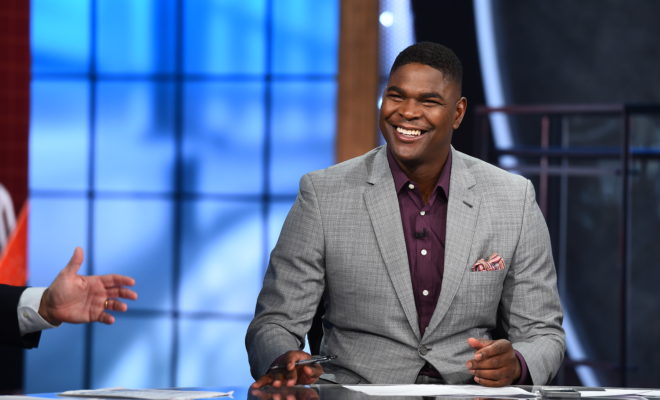 In early June, Ryan Glasspiegel and Bobby Burack at Outkick reported that Keyshawn Johnson was in discussions with ESPN to move from the show he co-hosts in LA for ESPN Radio and become a co-host on ESPN Radio’s national morning show. Johnson has been co-hosting his daily radio show on ESPNLA 710 since 2016.

As for why ESPN would be eager to bring on new talent for their morning show, it’s been rumored for some time now that Trey Wingo wants to leave the program and ESPN may want to start fresh rather than pairing co-host Mike Golic with yet another new broadcasting partner. Wingo himself replaced Mike Greenberg, Golic’s longtime radio partner, who left to become one of the hosts of Get Up!. Both Wingo’s and Golic’s deals with the show expire this year and Golic has been one of the voices of ESPN’s morning radio programming for around 20 years. So some new perspective may be in order.

The NY Post’s Andrew Marchand reported on Thursday that Johnson and ESPN have reached an agreement that would indeed see Johnson take a spot in the morning program. As for whether or not he’s replacing Mike Golic or third host Mike Golic Jr., or would work alongside them, remains to be seen.

If the Golics do leave alongside Wingo, it has been reported by Outkick that Jalen Rose and David Jacoby could be candidates to replace them and join Johnson on the revamped program. While Max Kellerman was said to be considered for the new show as well, Kellerman reportedly prefers to remain in his seat at First Take. Jalen & Jacoby, which has existed in many forms over the years for ESPN, is currently a TV show on ESPN in the 4:00 p.m. ET slot. No word yet on whether or not that would continue if they also took on morning radio duties.

All of this is part of a larger reimaging of the ESPN Radio daily lineup. With the departure of Will Cain, the potential end of the Mike Golic era, the chance Wingo will want to continue working in radio but in a different timeslot, the potential return to radio of Mike Greenberg, and many other rumors currently floating in the air, ESPN Radio is likely to have a very different sound by the time sports kick back into high gear later this year (or next year?).