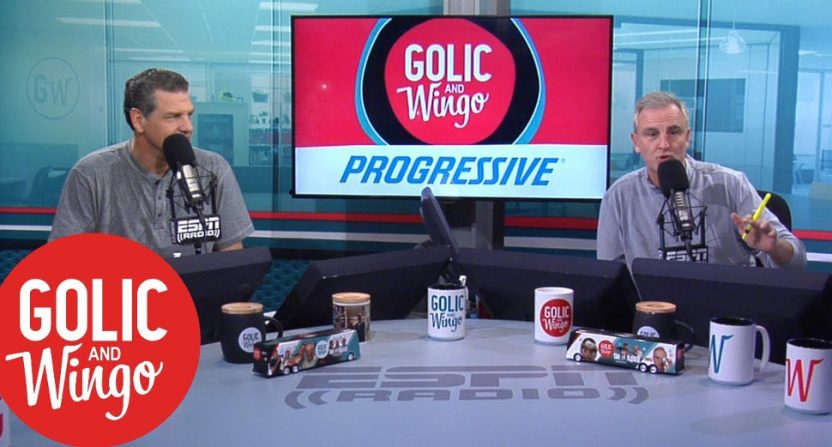 Much has been made of how much ESPN is spending on Get Up, from talent to studio, but an element of the end of Mike and Mike that’s received less coverage is what’s happening with Mike Golic and the new Golic and Wingo show (which has Golic in the same timeslot as former partner and current Get Up co-host Mike Greenberg, but on ESPN Radio and ESPNEWS instead of the main network). Mike and Mike was important as a TV program, but even more so as the anchor of the ESPN Radio lineup, and while there aren’t many details out there on how much ratings have fallen in the switch from Mike and Mike to Golic and Wingo, reports have suggested they’re down. However, ESPN Radio executives are saying that side of the switch has been smooth.

That comes from Jason Barrett’s piece on Golic and Wingo, which adds further proof of declining ratings, but with a caveat. “The ratings may be down year over year in top markets like New York and Chicago (Two of ESPN’s owned stations and operated markets), but that’s not a surprise as any new show going in after Mike and Mike would require time before an audience committed to them.” The piece also has a bunch of quotes from the involved personalities on how great everything is with the new show. However, what’s perhaps particularly interesting are the comments ESPN Radio’s Justin Craig gave Barrett:

“We’re proud of what we accomplished with Mike and Mike and saw this is an opportunity to build on the past 16 years,” explained ESPN Radio Senior Director, Programming and Operations Justin Craig. “Since making the change in mornings to Golic and Wingo, not one major market affiliate or dollar has been lost. I think that speaks to the power of our brand, the quality of our talent, and the trust we’ve earned from super serving our radio partners.”

That statement has to be true on some level; it seems unlikely an executive like Craig would make that comment if that was easily disprovable. But it’s worth considering what it doesn’t say. “Not one major market affiliate has been lost” suggests that some smaller ones (and there are a whole lot of smaller ones) that carried Mike and Mike may have opted against Golic and Wingo, and while “not one dollar has been lost” is harder to quantify, that could mean more that no sponsors have left ESPN Radio over the switch.

Update: A Twitter user tells us Houston ESPN Radio affiliate KFNC used to air Mike and Mike in full, but dropped the last two hours of Golic and Wingo for local programming. We looked into it, and yep, The Bench with John Granato and Lance Zierlein launched last Nov. 27, just 10 days after Mike and Mike signed off. And Houston was the sixth-ranked radio market in 2017 as per Nielsen, so that seems pretty major. Now, KNFC hasn’t technically been “lost,” as they’re still airing two hours of Golic and Wingo, but their decision to drop half of G&W for local programming certainly seems like further evidence that Golic and Wingo isn’t exactly as valuable to ESPN at this stage as Mike and Mike was in the last few years. And there are probably some other ESPN Radio affiliates out there that have opted not to carry the full Golic and Wingo show, especially with Craig only saying “not one major market affiliate” has been lost.

Of course, that’s somewhat understandable and worth accounting for. Barrett’s right that any Mike and Mike replacement probably would have had some growing pains on the ratings side, and any replacement could have had some issues on the affiliates side too. But claims that Golic and Wingo is doing just as well for ESPN Radio as Mike and Mike did are hard to believe at this point. Even on the editorial side, another ESPN executive (Marcia Keegan) told Barrett she thinks the show has room to grow:

“I think it’s a good show right now, but it has the potential to be great,” said Marcia Keegan, Vice President, National Radio Programming and Production. “The show could benefit from adding a few bigger guests, football talkers, and creative stunts. We’re always trying to find ways to improve. We’re only a few months into this show and already I can hear how it’s grown. As the guys gain more reps, they’re going to develop an even stronger rhythm.”

And maybe that’s true, and maybe the show will continue to improve both editorially and on the business side. It seems unlikely it will ever hit the heights of Mike and Mike, especially considering how Greenberg’s competing directly against it with Get Up (and how Golic and Wingo has a lower-platform ESPNEWS simulcast versus Mike and Mike‘s ESPN2 simulcast, and how it’s competing against morning versions of SportsCenter on ESPN2 as well), but Golic and Wingo could be fine.

As we’ve mentioned before, though, there’s still an opportunity for ESPN to admit this all didn’t work and to reunite the Mikes (presuming the atmosphere doesn’t remain too “poisonous“), continuing Get Up with the other hosts and a replacement, and that would be a less-surprising move than another Mike’s recent return to the radio world. That’s a long shot, however, and we’re likely to see the status quo of Get Up and Golic and Wingo continue for at least a while. But it’s tough to buy ESPN Radio executives claiming that Golic and Wingo at present is just as valuable as Mike and Mike was. And that’s an important reminder that the end of Mike and Mike is a key element to factor in to the overall resources ESPN is throwing at Get Up.