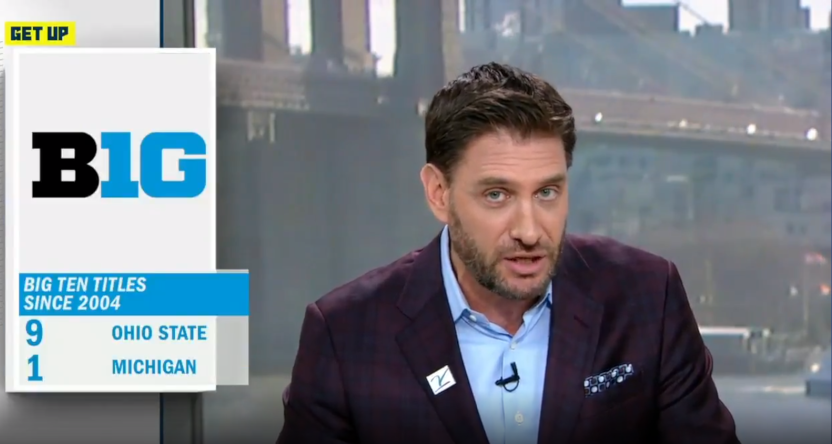 There are plenty of silly sports takes out there in any given week, but it’s particularly notable when two takes that appear to wildly contradict each other come from the same pundit. This time around, that’s ESPN Get Up co-host Mike Greenberg. On Tuesday’s show, Greenberg delivered a monologue suggesting it’s unfair to judge Michigan Wolverines coach Jim Harbaugh for losing to the Ohio State Buckeyes (for the fifth-straight year in his tenure and the eighth-straight year overall) because that series is “hammer and nail” and “a relationship, not a rivalry”; essentially, he claimed that Harbaugh had no chance of winning that game, and that criticizing him for not winning it is unfair. But just last Thursday, Greenberg predicted that Harbaugh and the Wolverines were going to win that game. Here’s what Greenberg said Tuesday:

Here’s how everyone has it wrong about Jim Harbaugh. @getupespn pic.twitter.com/b7n1y8LeWQ

“I’m about to say something that’s going to make a bunch of people mad because it is true. And nothing hurts quite like the truth, and here it comes. Jim Harbaugh is being belittled, criticized, and diminished because of a false perception about the program that he leads. Which is to say, the University of Michigan is not and has not for a very long time, been among the truly elite football programs in America. That was true before Harbaugh arrived, it is true today, and it will probably be true long after he leaves.”

“Here’s the reality. The two coaches who preceded Harbaugh at Michigan, Rich Rodriguez and Brady Hoke, went 24-32 in the conference. Harbaugh is 32-12. He’s won 80 percent of his games against everyone but Ohio State. And therein lies the rub. You want to make this all about Ohio State, but that is not a good idea, because a hammer and a nail have a relationship, but not a rivalry. And that’s what this is. Ohio State had beaten Michigan 10 of 11 years before Harbaugh came to town. The only Ohio State team to lose to Michigan since 2003 was coached by Luke Fickell. So perhaps I should just leave this with you in the form of a question; is the problem in Ann Arbor the coach, or is it the expectation?”

As is often the case when someone says they’ll make an argument with just “truth” or “facts,” those are a particular selection of facts selected to bolster a certain narrative, and some of the statements surrounding them are anything but factual. For example, “Those are facts. And Jim Harbaugh has almost nothing to do with them” is quite the claim following a statement about Michigan not winning the Big Ten since 2004, as Harbaugh presumably had quite a lot to do with the last five Michigan losses to Ohio State. Saying a guy who’s been the head coach for the last five years had “almost nothing” to do with those years’ losses is an interesting take.

Beyond that, sure, it’s possible to make a case that Michigan has improved under Harbaugh, that moving away from Harbaugh might only widen the gap between them and Ohio State, and that the expectations of them beating a dominant Ohio State team (undefeated this season, and #1 in the College Football Playoff rankings both last week and this week) were unrealistic. Plenty of people have made that case, and many of them have made it better than Greenberg. But it’s particularly funny to see Greenberg making these kinds of claims that the problem is “the expectation” when you consider that he’s one of the people who delivered that expectation, predicting on last Thursday’s Get Up (starting around 2:50 in the clip below) that Michigan was going to beat Ohio State:

“I have a feeling that this weekend is the weekend that Harbaugh climbs Mount Columbus. Michigan is going to beat Ohio State in the Big House on Saturday. …In fact, I’m going to take it a step farther. Harbaugh rewrites his entire narrative if he knocks this Ohio State team out of the playoff. Which he might do; they might actually still make it with a loss at Michigan, but I’m telling you right now he’s got a real good shot here.”

An argument that Michigan shouldn’t be expected to compete with Ohio State loses some its luster if you predicted just last week that the Wolverines were going to beat the Buckeyes. Of course, it’s not the first case of Greenberg showing off a short memory (remember when he called the Antonio Brown-Raiders saga “the most unprofessional act that I can ever remember seeing in professional sports” this September?), but you’d think he’d remember his own hot takes. And that he’s one of the people who put these supposedly-unrealistic expectations on Harbaugh. This isn’t quite as ludicrous as Greenberg’s argument last November that “for the good of the sport, the Browns should let [Baker Mayfield] go,” but it’s not far behind.