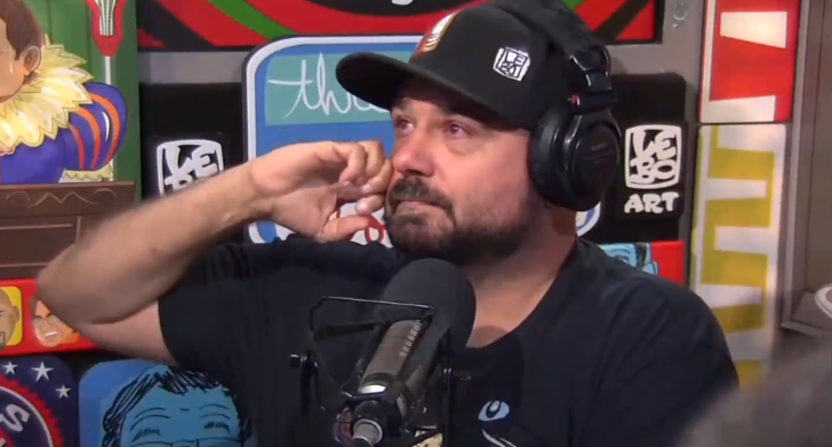 Stop what you're doing and watch this.@LeBatardShow responds to the racist "Send her back" and "Go back to your country" attacks against Ilhan Omar and other congresswomen.

"If you're not calling it abhorrent, obviously racist, dangerous rhetoric, you're complicit." pic.twitter.com/ntOC2Seg3b

“So, what happened last night. This felt un-American. Basically, a chant, ‘Send her back.’ It’s not the America that my parents came to get for us … There’s a racial division in this country that’s being instigated by the president. And we here at ESPN haven’t had the stomach for that fight because Jemele (Hill) did some things on Twitter, and you saw what happened after that. Then, here, all of the sudden, nobody talks politics on anything unless we can use one of these sports figures as a meat shield in the most cowardly possible way to discuss the subject.

“That’s what you’re seeing, and the only way we can discuss it around here — because this isn’t about politics, it’s about race — what you’re seeing happening around here is about race being turned into politics. And we only talk about it around here when Steve Kerr or Popovich says something. We don’t talk about what is happening unless there’s some sort of weak cowardly sports angle that we can run it through. When sports has been a place where this stuff changes.”

There’s no way to interpret that as anything other than a withering critique of ESPN’s leadership and Pitaro in particular, wrapped up in a clear and willful violation of the policy itself. And yet, today, Le Batard remained on the air.

LeBatard is on the air and he just broke the policy. They could have possibly financially disciplined him. https://t.co/vaqXDOHnSq

Marchand expanded on his reporting here, noting that ESPN is insisting that the policy remains in force:

ESPN spent Friday telling employees that its no politics policy is still in place even after Dan Le Batard violated it and remained on the air without any known discipline.

ESPN officials were spreading the word through the media Friday that nothing has changed in terms of policy in which it only wants its commentators to delve into politics when it intersects with sports.

The logical fallacy isn’t hard to spot; it’s hard to keep saying there’s a rule in place if someone can walk all over the rule with seemingly no repercussions. ESPN is apparently hoping this goes away quietly:

While sources say Pitaro and Le Batard have had several conversations, Le Batard remained on the air and ESPN’s main goal seems to be to try to keep any media storm to a minimum. ESPN declined to say if there was any financial punishment.

Of course, considering Le Batard’s whole (entirely correct) point was that the policy was both dumb and impossible to enforce, this response just makes him look even more correct. ESPN, meanwhile, is being exposed here, because the “no politics”/”not a political organization” stance was always nothing more than an insulting PR move designed to try and appease both rights partners and a vocal minority of conservative viewers.

So of course Pitaro and ESPN leadership would spend today saying that actually, yes, the rule is still in place. It’s a placebo for people who want to believe that there’s a distinction between sports, politics, culture, and the role of broadcasters at a massive media company in commenting on all of them. Le Batard knows this, and exposed it for what it was, and now ESPN has to tacitly confirm his point while also not really punishing him in any visible or meaningful way. Plus he was able to use his platform to speak his mind (eloquently and forcefully) on an important issue.

Le Batard knew exactly what he was doing, and the aftermath has borne that out.