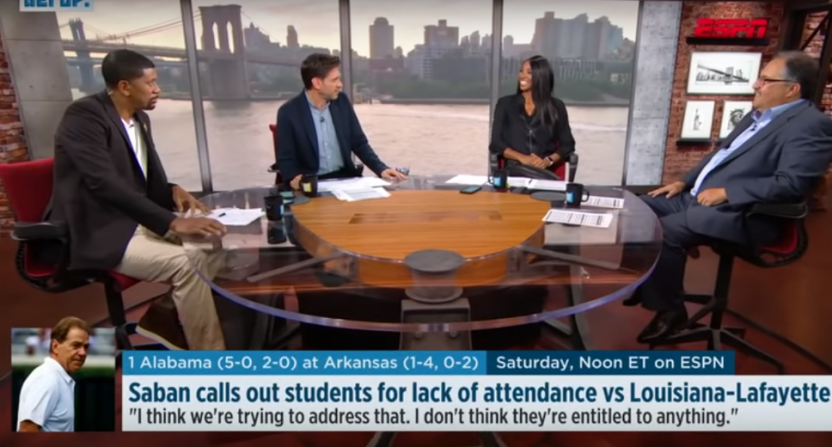 ESPN’s April debut of new morning show”Get Up” struggled in the ratings, perhaps partly thanks to the “woke” narrative about the show (which is a long way from what it actually is), and those struggles continued this summer. However, much of the discussion was that it would be given time (at least through the early part of the football season) to right the ship, and while significant changes were in fact made before football got rolling (most notably, Michelle Beadle’s departure and the decision to shorten the show by an hour), those were about more than ratings. And now that football season is in full swing, the ratings story for Get Up certainly seems to be improving. That can be seen from the @DidGetUpGet300K (viewers) account on Twitter:

It’s also notable that many of the 300K plus results have come since Beadle’s August 29 departure. But that probably has more to do with both the show being shortened and (especially) with football season producing more interest in talk shows. And ESPN’s strategy of providing regularly-rotating football analysts for the show, while initially panned here, seems to be working okay with viewers. It can be debated if they might have been better off adding one or two football analysts on a more-steady basis, but in any case, talking about football is certainly helping them, as 16 of their 31 300,000 viewers or better showings have come in September and October:

Yea. I’m sure it has nothing to do with football returning though… https://t.co/fWTP7PQyCa

Are these numbers good enough to mean ESPN’s Get Up decision was worth it? Well, that’s debatable. This show has cost them a lot, in salaries, in promo spots, and in PR efforts, and it’s also led to major effects elsewhere in their lineup, such as shifting from Mike and Mike to Golic and Wingo and relocating NBA Countdown from LA to Bristol to New York to LA again. And it’s still not particularly clear that this is much better (especially considering the cost) than if they’d just stuck with morning editions of SportsCenter. And it’s also not clear that the show will be able to retain this improved audience for the rest of the football season, or even more importantly, after the football season ends.

But the Get Up story has certainly improved from where it was earlier this year, and that’s significant. There’s a lot on the line for ESPN with Get Up, and while it was conceived under former ESPN president John Skipper, it’s something that new content chief Connor Schell was heavily involved with. It’s also one of the foundational reasons for ESPN’s new New York studios. If the Get Up ratings had stayed where they were before football season, there would have been much more discussion about further changes to the show, or perhaps even transitioning out of it altogether. These ratings have helped to quiet that discussion for now. We’ll see where it goes from here, but Get Up ‘s current situation definitely seems much improved from where it was earlier this year.