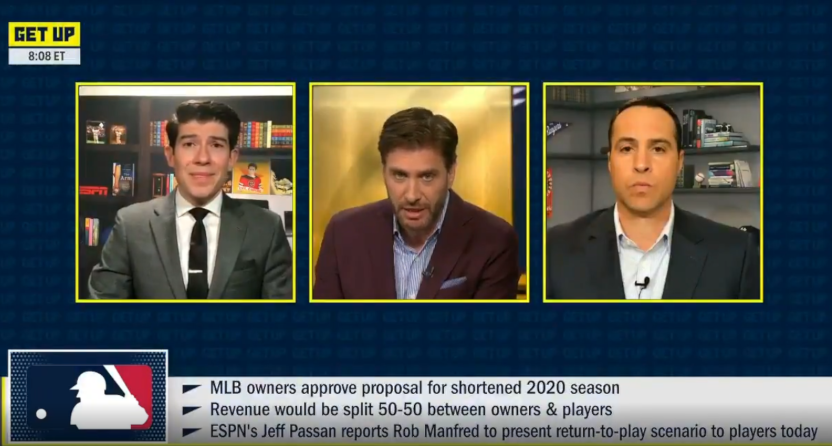 Even in the midst of the COVID-19 pandemic, Mike Greenberg’s Morning Hot Take Parade (which ESPN calls Get Up) rolls on with its longstanding quest to bring us the dumbest sports opinions imaginable, and it did a good job on that front Tuesday. With the MLB owners approving the league office proposal for a modified and shortened season beginning in July, the focus now shifts to the players’ association. And the MLBPA has a number of issues to consider here, from health concerns (very valid even in games played without fans) to players’ sequestration away from their families to the proposed financial split, which is a shift from the pro-rated salaries the players approved in March to a 50-50 split based on actual revenues. But Tuesday saw well-compensated ESPN analysts Greenberg and Mark Teixeira using their national platform on the Morning Hot Take Parade not for a serious discussion of the players’ concerns, but rather an endorsement of the owners and a minimization of players’ concerns, which feels more than a little ironic given their own pasts. Here’s a key clip:

"If [a potential 2020 MLB season] blows up over money, they will lose fans that they will never get back. And they will deserve it."@Espngreeny and @teixeiramark25 are urging MLB players to accept the return-to-play proposal. pic.twitter.com/npOuO4kOFT

Brendan Kuty of NJ.com has a transcription of Teixeira’s remarks that begins just before the clip in question. Here’s a combination of that and of what Teixeira says in the clip:

“Players need to understand that if they turn this deal down and shut the sport down, they’re not making a cent. I would rather make pennies on the dollar and give hope to people and play baseball than not make anything and lose an entire year off their career.”

…[MLBPA executive director Tony Clark] is supposed to stand up for us and our salaries. That being said, this is unprecedented in the history of the Major League Baseball Players’ Association. And every other year, I would stand together and say ‘The owners aren’t going to do this to us and we’re going to get paid a full fare. If we’re going to put ourselves out there, I’m going to get paid a full day’s wage. The problem is that you have people all over the world taking pay cuts, losing their jobs, losing their lives, frontline workers putting their lives at risk. These are unprecedented times. This is the one time that I would advocate for the players accepting a deal like this, a 50-50 split of revenues.”

“It’s not that crazy. If you really think about it and boil it down to what the players usually get from a revenue standpoint, it’s actually lower than 50 percent of the baseball revenue for a full season. So, if I’m a player, I don’t like it. But I’m going to do whatever I have to do to play and that means taking this deal.”

And here’s what Greenberg says in that clip (starting around 0:56):

“Choosing the middle of a pandemic to start making these kinds of negotiating tactics strikes me as the opportunity to blow all of the goodwill that you have built up with all of the labor peace that you have had in this sport for a very long time. And all three of us (including himself, Teixeira and ESPN MLB reporter Jeff Passan) are old enough to remember a time when baseball was the sport where the owners and players couldn’t get it together, and they had a World Series canceled, and everything else. What I’m telling you right now is that if this thing blows up over money, they will lose fans that they will never get back, and they will deserve it.”

It is incredibly ironic to see Greenberg and Teixeira out here as ESPN talking heads saying that labor should just take whatever terms ownership wants to impose. First, with Teixeira, there’s his playing career to consider, as former Fire Joe Morgan co-creator (more recently known for his work with The Office, Parks and Recreation, Brooklyn Nine-Nine and The Good Place) Mike Schur noted:

Teixeira was drafted in 1998, asked for too much money, turned it down. Then he was drafted 5th in 2001 — would have been 4th, but everyone knew he was asking for so much money the Phillies didn't bother. Then he made $213 million. This is all fine, of course, but also: zip it. https://t.co/d1AmWVIg20

And with Greenberg, it’s been reported that he’s making $6.5 million annually, largely for his work on the travesty that is Get Up. That’s an amount that was well above even the salaries of initial co-hosts Michelle Beadle ($5 million) and Jalen Rose ($3 million), and it comes after all the value destruction that Greenberg brought to ESPN overall by forcing his way off Mike and Mike (it’s notable that Golic and Wingo has done far worse in terms of both affiliates and ratings, despite claims from some optimistic ESPN executives) to start a TV show no one asked for. And he certainly didn’t get that much money by just agreeing to whatever terms management proposed. (Or telling his agent to agree to whatever terms management proposed; Greenberg obviously doesn’t handle his own contract negotiations, or his pay would be far lower.)

So it’s rather funny to see Greenberg and Teixeira, two people who have been quite enriched by agents’ attempts to get what their labor is “worth,” out here arguing that MLB players should just take whatever owners are proposing to them. And that goes even beyond the financial issues; there are a whole lot of problems with this proposal when it comes to players’ health and safety. But despite the benefits that agents and unions have brought them over the years, Greenberg and Teixeira apparently feel it’s worth telling players to just uncritically accept ownership offers at this point.