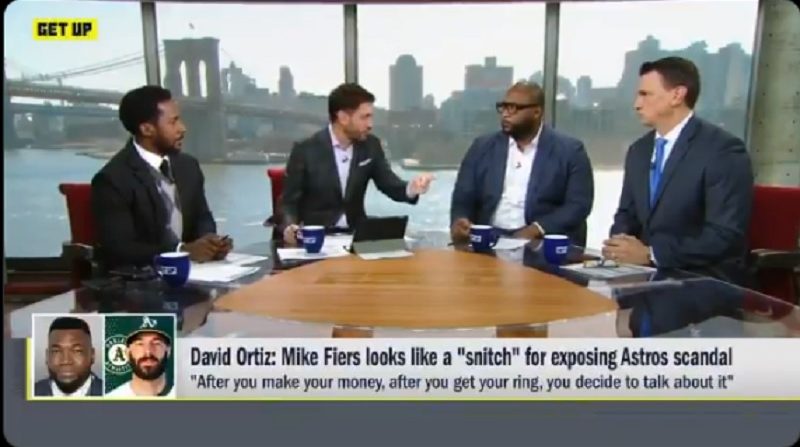 A month after then-Mets employee and then-Sunday Night Baseball analyst Jessica Mendoza embarrassed herself and earned widespread scorn for calling Mike Fiers a snitch, ESPN was at it again.

Yesterday, former Red Sox DH (and current Fox Sports broadcaster, and current Red Sox special assistant) David Ortiz called Fiers a snitch for not talking about the Houston Astros’ sign stealing while it was happening. On Friday’s edition of Mike Greenberg’s Morning Hot Take Parade (which ESPN calls “Get Up”), NBA analyst Tim Legler and college football analysts Desmond Howard and Marcus Spears agreed that Fiers was a snitch because….he didn’t complain loudly enough when he was an Astro?

David Ortiz said that Mike Fiers looks like a "snitch" for exposing the Astros scandal.

Howard also brings a tremendously bad take to the table, saying that bringing Fiers into an organization was a *problem* because he opened his mouth about the sign stealing (that was a well-known, much-despised secret across the league). Legler also said he’d be surprised if any player *didn’t* agree with Ortiz (well Tim, get ready to be surprised).

Keep in mind, numerous teams and players had known about the sign stealing, complained about it to MLB, and baseball…did nothing. Was everyone in baseball supposed to just keep their mouths shut and let the Astros keep doing what they were doing, despite knowing about it and being pissed off about it?

On the bright side, baseball is getting talked about on a national level. On the dark side, it’s getting talked about by ex-athletes who didn’t play baseball, and the player who brought one of baseball’s biggest scandals (and the hottest topic across the sport over the last three months) is being trashed by those former athletes. Wonderful way to promote the sport!