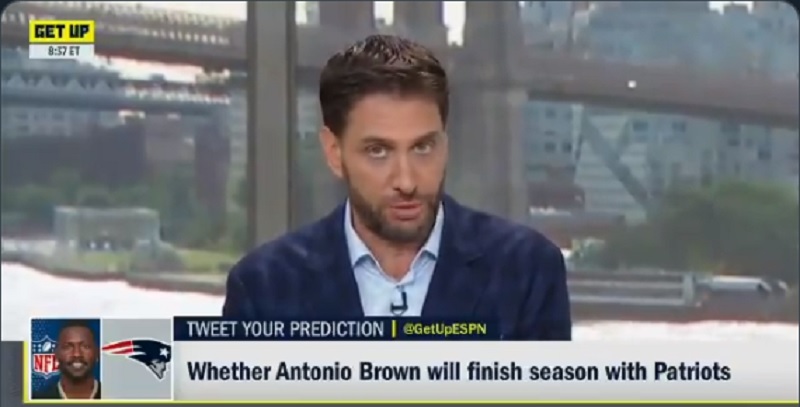 Mike Greenberg dropped a hot take bomb on Monday morning’s edition of Get Up, calling the latest chapter in the Antonio Brown (him forcing a release from the Raiders to sign with the Patriots) “the most unprofessional act that I can ever remember seeing in professional sports.”

If we were still doing This Week in Hot Takes (may the column rest in peace), we would have dropped five fire emojis on this one.

My main takeaway from this is that Greenberg apparently has no long-term memory whatsoever, because there are a whole lot more egregiously awful and unprofessional things that have happened in pro sports than a player forcing his way off a team that he didn’t want to be on in the first place.

There was a guy murdering people playing for the Patriots.

Seems like I remember a few yrs ago, dude that played for the Chiefs killedx his girlfriend then drove to the team facility and killed himself in the parking lot… I think that was less professional than Antonio Brown tricking the Raiders into cutting him.

Eli refusing to play for the Chargers was by far worst. And by a far less talented player.

Izzy Alcantara kicked a catcher in the face before storming the mound.

Juan Marichal hit John Roseboro in the face with a bat. Twice. https://t.co/I8FhmdDvzK

A dude retired in the middle of a game https://t.co/gVBa8nb6IP

Tonya Harding hired a hitman to break her opponent's leg with a crowbar https://t.co/CAKUXsaLBH

Moral of the story: there has been a whole lot of unethical, illegal, immoral, and unprofessional stuff that has gone on in pro sports (not to mention college sports. Hell, we could probably have a whole new discussion if those were included) over the years. In comparison to all of that, Antonio Brown is small potatoes, let alone the most unprofessional act in pro sports. This is what happens when you prioritize takes and amplifying the current news cycle over being rational, measured, and keeping current events in perspective.

I wonder how Greenberg would have felt if Brown forced his way to the Jets (who Greenberg is an avid fan of), instead of their division rival (and I use the word “rival” very loosely) Patriots. I’m sure his opinion would be exactly the same, and he’d be just as upset….right?