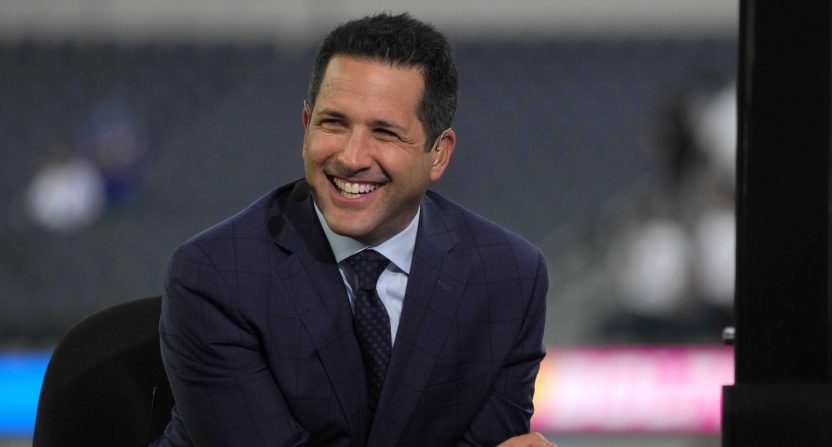 In the waning days of November, Awful Announcing’s Ben Koo wrote a piece titled “Adam Schefter’s credibility problem is beginning to snowball ahead of his own free agency” in the wake of his tweets about an impending lawsuit against Dalvin Cook as well as other tweets that seemed to be transparent attempts by agents to generate buzz for their clients.

“I think ESPN has to realize that having only one primary news breaker on call all year long while their brain melts from staring into his phone all day long is maybe something that isn’t sustainable, manageable, healthy, or logical journalistically,” wrote Koo.

In the five months that followed, Schefter confused everyone by offering conflicting reports on the same topic, had the Tom Brady retirement fiasco, inferred that the “truth” was revealed when a grand jury decided not to pursue criminal charges against Deshaun Watson, and announced the death of Dwayne Haskins with a tweet that focused on his “struggling” in the NFL.

In that time, ESPN also re-upped Schefter with a five-year extension and high praise after gambling companies expressed interest in snatching him away. Schefter would later say that he stayed with the Worldwide Leader after meeting personally with ESPN chief Jimmy Pitaro and that “in the end, I felt more comfortable being in a traditional media world.”

All of which is to say two things.

1. Adam Schefter continues to be a legitimate liability as a journalist.

2. ESPN loves him and does not appear to have any problem with that.

When Schefter tweets something tone-deaf about a legal matter involving sexual assault or is revealed to have let an NFL executive red-line a story before he published it, it’s fair to wonder whether or not this might be the thing that makes ESPN reconsider having him be their face of their NFL reporting. But then, a few days pass, and, just like with the Dwayne Haskins tweet, the initial anger dissipates and things go back to normal.

There’s a good chance you don’t even remember half of the terrible things Schefter has tweeted or said over the years.

When Ray Rice was originally suspended for 2 games, Schefter asked if it was "lenient enough." https://t.co/gXiIWWqtlU

It’s not that people don’t care. According to Trend Map, Schefter lost over 11,000 Twitter followers on April 9 due to the Haskins tweet. That would be a staggering number except for the fact that he still has over 9.4 million. And if there was a way to sum up Schefter’s power in ESPN’s eyes, that’s it right there. Even on his worst day, he still has more social media reach than every NFL franchise and every NBA team other than the Los Angeles Lakers.

And for all the gaffes and PR headaches that Schefter caused ESPN in the past year, he also gained over 1.1 million new Twitter followers. The train has not stopped running one bit.

Even amongst “insiders,” Schefter stands alone. If Adrian Wojnarowski drops Woj Bombs on his 5.2 million followers, Schefter’s breaking news lands like asteroids during the Cretaceous Period (Remember the impact of his initial Aaron Rodgers report?). And ESPN can build an entire day around one Schefter NFL report in a way that dwarfs just about any other kind of breaking news in American sports.

All of which is to say two more things.

1. Adam Schefter is way too valuable to ESPN’s strategy to cut him loose over bad journalistic ethics.

2. With great power comes great responsibility and that’s one thing he hasn’t learned (and may never).

While many people ask “Why isn’t ESPN firing Adam Schefter?” or “Is Adam Schefter really the best person for this job?” they’re missing the way more relevant and salient question:

What is the deal with Adam Schefter?

Because when you step back and look at the state of major “insider” sports journalists, he is really the only one who continues to step on rakes like this. All you have to do is peruse their Twitterfeeds and this becomes abundantly clear.

Woj pretty much just tells you the facts or points you towards an article about the NBA. We know that Woj understands the power of his platform and wields it as he sees fit. But he also mostly keeps his feed clean and free from (too many) personal opinions. Perhaps he learned his lesson after getting suspended over a profane email he sent to Senator Josh Hawley and decided to stick to the facts.

Woj’s NBA counterpart Shams Charania’s feed is essentially straight-up reporting, breaking news, and links to videos of him discussing said news. Shams has courted controversy before but that had more to do with the people and organization he was covering than him.

Ian Rapoport, who runs in the same circles as Schefter, works in some personal sentiments and opinions from time to time, but not nearly the same degree. He’s certainly run into refuted reports and drama, including the time he was suspended for posting a Manscaped ad on his social media channel. But Rapoport’s journalistic issues are few and far between.

There’s Jay Glazer, of course. His Twitterfeed is a whole thing but Glazer has also evolved beyond the world of being an NFL insider into a different entity altogether.

And then there’s Schefter, whose Twitterfeed reveals a slew of curious choices beyond his infamous snafus. And when you combine them all, the desire to ask the question, “What is the deal with Adam Schefter?” becomes all the more apparent.

Schefter regularly posts ads on his Twitter account and appears in some as a spokesperson, which is itself not new or unique. That said, just because it’s something we’ve gotten used to from many of our major sports journalists, seeing a paid advertisement featuring NFL players on the Twitterfeed of an NFL reporter does not exactly scream ethics.

Update: @BONandVIV is now the Official Hard Seltzer Sponsor of the NFL. Want to make that clear. #ad pic.twitter.com/udJji3EDGT

Then there’s an entire genre of Schefter tweets that aren’t ads but sure feel like they’re part of some kind of arrangement, paid or otherwise. Maybe Schefter tweeted about Tom Brady’s vanity license plate with Best Buddies out of the kindness of his heart. Maybe he tweeted about HBO’s Terry Bradshaw documentary, taking the time to include channels and timezones, because he’s a fan. Perhaps he felt the urge to tweet a teaser video for Ladder Sports supplements’ campaign with LeBron James because he thought it seemed neat. But even if that’s all true, it still all feels murky and unnecessary advertorial space to be in.

LeBron James and Myles Garrett are collaborating with Ladder Sport supplements to deliver a message to Cleveland that is being released Friday. pic.twitter.com/OBCgks3CDr

Even when he’s tweeting innocuous things, Schefter finds a way to make it feel weird.

A good spot to be in…. pic.twitter.com/TvvIZmgD7e

And then there are his tweets about his daughter, Dylan, who has parlayed her dad’s job into an NFL gig of her own on Nickelodeon. While there is no public reference to a paid advertising deal or quid pro quo, Schefter tweeted out a video featuring her every Thursday like clockwork this past NFL season.

Bengals’ kicker @McPherson_Evan is one win away from unleashing his version of The Griddy while Rams’ QB Matthew Stafford has achieved one season- and career-long goal of reaching the Super Bowl, via @Nickelodeon. pic.twitter.com/kZjtX5EG9b

What’s striking about the tweets is how poorly they perform in comparison to everything else. A fairly generic Adam Schefter tweet can be counted on to generate 10,000, 20,000, or even 50,000 Likes. Most of these tweets garner significantly less. There is no interest in them from his audience. It’s strictly a family affair.

It would be easy to just write this off on its own as a cute thing. And there’s nothing inherently “bad” about it, aside from the irony of the NFL’s top insider employing nepotism and the inevitable wondering about what kind of leverage is being deployed behind the scenes to make sure the NFL’s top players are involved, but it just feels like too much for someone in Schefter’s position.

So take all of that and throw it in a pot. The bad judgment calls. The tone-deaf tweets. The ethical problems. The unnecessary editorializing. The paid advertisements. The sketchy non-ad ads. The weird graphics. The dedication to promoting his daughter.

What do you get? Honestly, we’re not entirely sure. But we know that something’s off about it. It doesn’t conjure the mindset of a person who should be holding as much power as Schefter has over the sports news of the day. We accept it in part because we don’t make the same demands of many ESPN personalities that we make of most journalists. And that’s certainly a discussion worth having unto itself.

We should note that Schefter has done some good with his Twitterfeed as well, helping to raise over $1 million for the Parker Dickerson Fund after the death of ESPN reporter Jeff Dickerson, and garnering support from myriad NFL teams and players while doing so. If there’s a positive aspect to his reach and connections in the NFL community, it’s there.

Overall, however, all signs point to Adam Schefter continuing to make unforced errors in judgment every 2-3 months that require a deletion, retraction, or apology. He won’t improve or learn a lesson because he has no reason to. His missteps are baked into the process now.

All signs also point to his Twitter following increasing, his tweets defining entire news cycles, and for ESPN to silently stand by their man through it all.

That is the deal with Adam Schefter, whether you agreed to it or not.