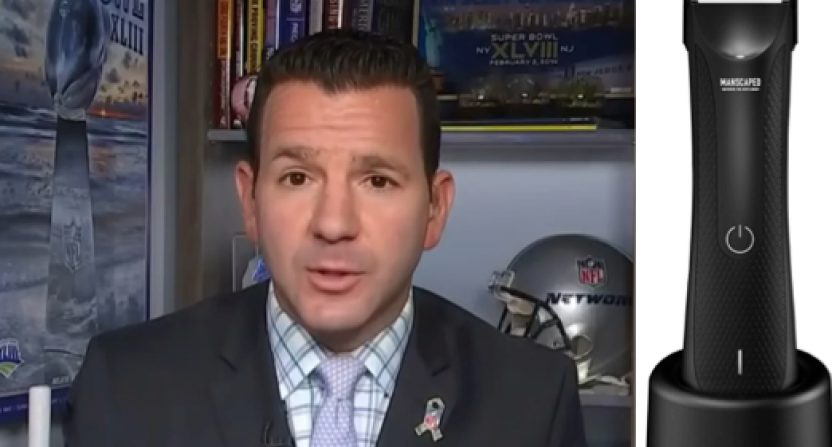 With over two million followers on Twitter, followers were mostly drawing blanks as to on what could have been the piece of content that got Rapoport in hot water with his employer.

Ian Rapoport has 2.3 million followers and no one seems to know what he posted to get himself suspended.

The leading theory for much of last night was that his reporting on the Titans’ Covid outbreak and their subsequent unauthorized workouts might be the culprit.

If Ian Rapoport got suspended from NFL Network for reporting that the Tennessee Titans, who have had a huge COVID-19 outbreak, have been working out at a TN High School against the NFL quar protocol, it means the NFL knew that the Titans were doing this and were trying to hide it

But another theory soon emerged.

Story will be up a bit later.

Rapoport posted an ad for Manscape, which is to clean up your groin area, without approval and that is why he got nicked.

Even though Marchand is a very well connected sports media reporter, some were not buying his reporting.

He didn’t get suspended for that Manscaped ad. He was suspended for the Titans workouts retweet. My speculation is that someone from the Titans got pissed and sent a scathing email to Goodell and the president of NFL Network and they used to razor company as a (man)scapegoat https://t.co/ZQLOMcRBdN

So what actually happened here?

In Mid September, Rapoport posted a video onto his Instagram promoting the Manscaped Lawn Mower. The video is now deleted.

NFL Reporter, Jane Slater, commented on the video and Rapoport and her had a pretty uneventful conversation about the video.

I remembered that Ian replied to Jane Slater’s original tweet that linked to Ian’s manscaped promo vid. Here is Ian’s reply to that tweet, and Jane’s tweet is now deleted. Makes sense that the Manscaped ad is the reason for his suspension.

Sorry Ian. Oct 22 will be a good day. https://t.co/xLYmNrK0Jj pic.twitter.com/RMFIYVCUG3

While the original video and Slater’s tweeting of the video are now deleted, The Big Lead did oddly cover this. From their article, a few quotes from the Rapoport’s video

“The perfect tools, for your family jewels.”

“You don’t want any nicks when you’re cleaning up, you know, that area.”

“There’s LED lights, so you can see everything that’s going on down there.”

If you think this whole thing is silly and unworthy of serious consequences, you’re not alone. In fact, Slater came out and said the same thing in a now deleted tweet after news of Rapoport’s suspension broke. 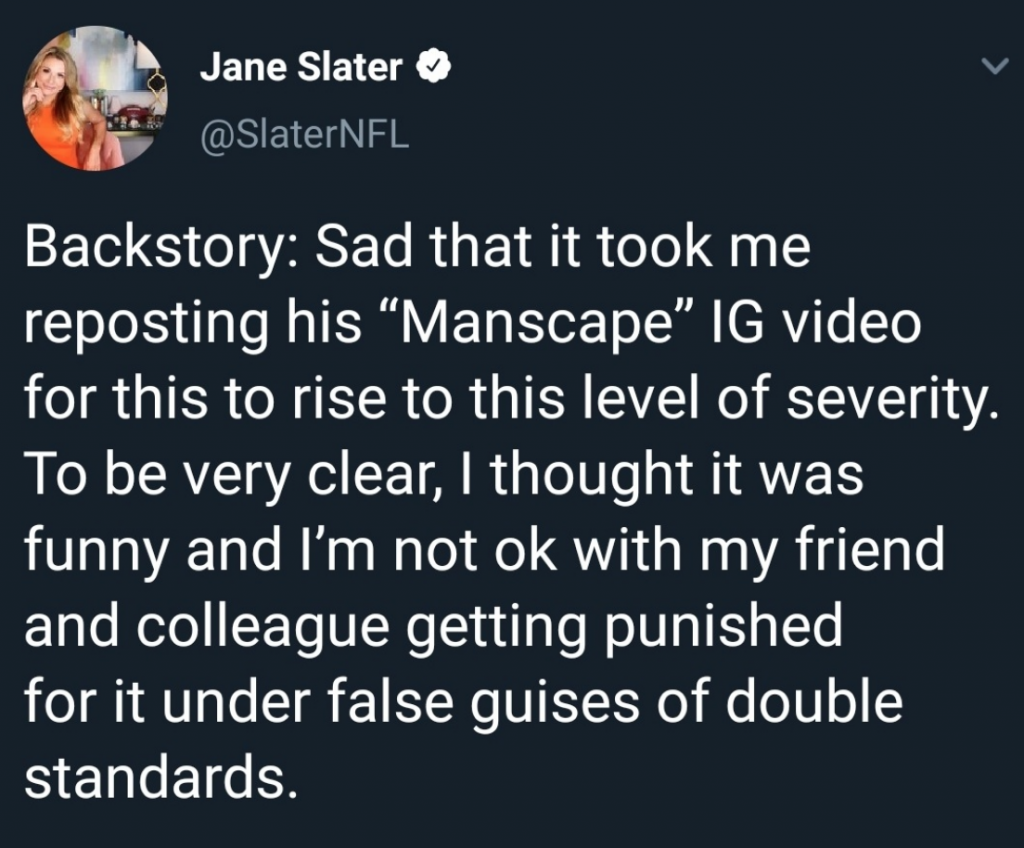 There you have it. Ian Rapoport did a stupid video for a pube trimmer. Jane Slater thought it was funny. The NFL Network didn’t take kindly to it and decided to make this a big thing by enforcing some rigid and dated social media policy that likely centered around ensuring social media sponsorships don’t conflict with existing NFL sponsorships (in this case the NFL has a relationship with Gillette).

While I understand why such a policy exists, and the need to enforce it, the NFL’s handling of this is actually counter productive as it makes the NFL look pretty heartless and humorless and actually gives more promotion to a non NFL sponsor.

Keeping Rapoport off the air only hurts NFL Network, but shaming him into a public apology for something that nobody except the NFL (and perhaps Gillette takes offense to) ensures a negative publicity cycle that makes the NFL look unreasonable enforcing a policy that literally nobody cares about.  This is a situation where nobody really wins, except for Manscaped who is getting a ton of free promotion because the NFL is frankly being just unreasonable and vindictive.