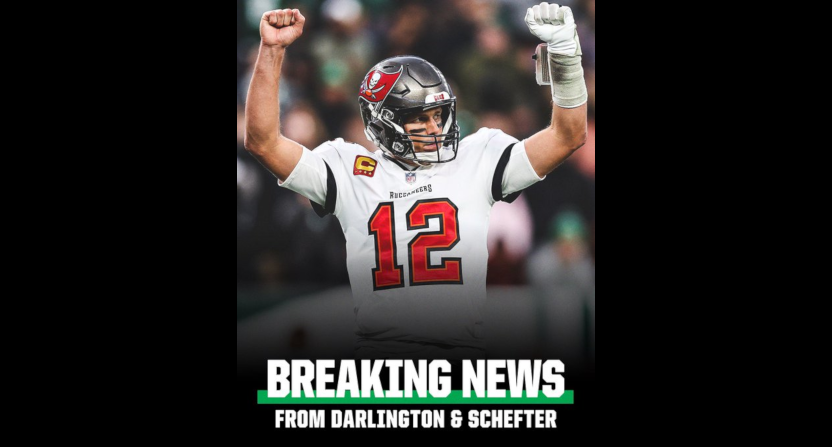 The end result of the drama around ESPN’s report from Jeff Darlington and Adam Schefter Saturday that Tom Brady “is retiring” and the subsequent disputing of that (from the Bucs, Brady’s agent, Brady’s father, and Brady himself) was in fact Brady’s retirement, which the quarterback himself announced Tuesday. There are quite a few people commenting on that as a victory lap for Schefter, Darlington, and ESPN, especially considering how Schefter liked tweets questioning his reporting. And it’s certainly not a loss for them, whereas Brady coming back to play would have been a major reversal that hurt Schefter’s credibility (already under fire after some recent missteps). But there are two plausible ways that events here actually unfolded, and only one of them indicates the initial reporting was totally correct and justified.

The first option here is that Tom Brady lied to the public Monday night. Brady’s SiriusXM Let’s Go! show with Jim Gray and Larry Fitzgerald Monday saw him make his first public comments on that ESPN report, and he was extremely clear there that he had not yet decided. Specifically, Brady said there “I’m still going through the process that I said I was going through. Sometimes it takes some time to really evaluate how you feel, what you want to do and I think when the time is right I’ll be ready to make a decision one way or the other.”

Those comments do not appear compatible with what Schefter and Darlington reported Saturday, which was that the decision was made and that Brady “is retiring.” And this was furthered with ESPN standing by that reporting, and even running the likes of “retires” and “is retiring” on their Bottom Line ticker. So the only way for that reporting to be completely correct, to the degree of “is retiring,” is for Brady’s comments Monday to be a lie. That would mean that he had previously made the decision, had told someone who then told Schefter, then decided to walk it back publicly Monday and announce it on his own terms Tuesday. That’s certainly possible, but it’s not the only scenario that could have happened.

The second option is that Darlington, Schefter, and ESPN received and published inaccurate information on the final decision being made as of Saturday. And with the subsequent and quick “we haven’t heard yet” public pushback on their report from Bucs’ GM Jason Licht, Bucs’ coach Bruce Arians, and Brady’s agent Don Yee, it seems unlikely they got it from any of those three figures (or from any other source on the Bucs’ side). And they certainly didn’t get it from Brady himself, or from his father.  It is notable that the Darlington/Schefter piece included “sources told ESPN,” so they heard this from more than one person, and it seems likely that for ESPN to publish this, at least one of those people had to be pretty well-connected to Brady. But that doesn’t make that source or sources infallible.

It’s worth keeping in mind the potential game of telephone here. It’s quite possible that Brady said one thing (like, for, example “I think I’m going to retire”) to Source A, and then maybe the same thing or something worded slightly differently to Source B. Maybe Sources A and B then told Schefter and Darlington “Brady’s going to retire,” leaving out the “I think.” In that case, Darlington and Schefter would have accurately relayed the information they had, but it wouldn’t have been completely accurate information.

This is not to say that ESPN’s entire reporting here was based on direct comments from sources. It’s pointing out that direct comments from sources about what Brady said might not have been the exact words Brady told those sources. And it’s worth noting that it seems like most other potential information here, even including announcement plans, could be drawn up in advance in case of Brady deciding to retire without necessarily indicating that decision had been made.

The key factor is when Brady pulled the trigger and went from “I’m considering retirement” to “I’m going ahead with retirement.” By his account, that’s between his radio show Monday and his announcement Tuesday. By ESPN’s account, that’s before that. And the key indication of that decision being made would seem to be comments from Brady, either directly to the public as he did Tuesday morning, or to people who then relayed it to ESPN at an earlier point.

And, on the ESPN side, there’s a potential peril here from secondhand anonymous sourcing. The final ESPN piece used paraphrases of what sources told them rather than direct quotes, and it seems probable the sources were paraphrasing Brady; it’s unlikely anyone around him is secretly recording him and then providing full quotes to ESPN. There are a lot of cases where that kind of paraphrasing works out okay. But in the case of a forthcoming decision that may or may not have been fully made, at least two levels of separation from the direct quotation in question is potentially a problem. It’s maybe notable how one further level of separation demonstratively snowballed on ESPN college basketball coverage Saturday, with an announcer setting up halftime coverage of the Brady story with “Big news out of the football world, of course, with Tom Brady announcing his retirement”:

…this did not happen pic.twitter.com/1MFOFGyE29

That one was very clearly wrong, as Brady did not “announce his retirement.” And even the coming-up graphic of “retires” wasn’t really great given the denials out there by this time. But the on-air promo for it is particularly notable as an example of how things can get jumbled from one person to the next: ESPN’s story did not say “announce,” and their graphics didn’t say “announce,” but whatever they did pass on here led to on-air commentary of “Brady announcing his retirement.” (And absolutely, on-air promos for upcoming coverage often aren’t entirely right, especially considering the remove they’re at and especially with an evolving story like this, but this was still interesting.)

It of course needs to be mentioned that plenty of sports reporting is done on incomplete events, and that reporting does sometimes change events (as the observer effect illustrates more generally in physics). And Schefter is well aware of that: his 2018 discussion with Pardon My Take of his account of what happened with the Browns and Condoleezza Rice is that Browns’ then-GM John Dorsey mentioned the possibility of hiring a woman in a press conference, Schefter then talked to someone in the organization and asked if they had a particular woman in mind, they said “Yes, Condoleezza Rice,” he reported that the team was interested in talking to her, and the way the story blew up led to the team issuing a public denial. By Schefter’s accounting of that story, at least, that’s not really on him. And if something similar did happen here, where Brady told ESPN’s sources unequivocally “I’m retiring,” ESPN correctly reported that, and Brady then lied and said he hadn’t made up his mind, that’s scenario #1 above, and ESPN comes out of it looking fine.

The challenge with fully evaluating what happened here is that the real truth of whether this was Brady lying or ESPN getting the reporting wrong is only known to a very small circle of people: Brady, the sources in question, and anyone else he told (if he did in fact tell people he’d decided to retire) who did not talk to ESPN. And none of that ever seems set to come out: Darlington and Schefter aren’t likely to burn their sources over this, especially with it eventually coming true, and we can’t see inside Brady’s mind to confirm if his accounting of the situation Monday was correct or if it was a lie. And that’s probably about the best ESPN could hope for here: they wound up reporting Brady’s retirement three days before he announced it, but even though he disputed their report, he landed on the same eventual decision.

But, from this corner, it’s hard to see this as a great win for Schefter, Darlington, and ESPN, or to be certain that Brady’s comments Monday were flat-out lies. Maybe they were, and maybe Brady decided to dispute this so he could then announce this new “decision” in his preferred manner. But maybe they weren’t, and maybe ESPN read too much into sources’ comments, or gave too much trust to sources who didn’t actually know Brady’s decision. We may never know. But it’s worth remembering that there is this lingering uncertainty about this story, and that it’s not necessarily “ESPN got Brady’s retirement news three days before he announced it!”