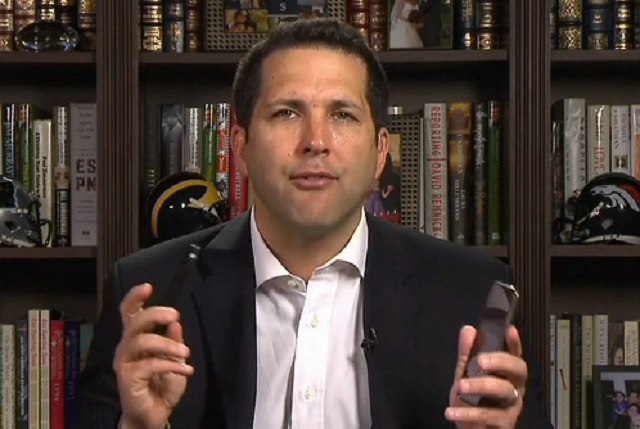 During a week when Adam Schefter’s journalistic ethics have come under scrutiny, the timing of a new rumor involving ESPN’s NFL insider is intriguing.

According to Front Office Sports’ Michael McCarthy and A.J. Perez, Caesars Sportsbook is eyeing the end of Schefter’s contract in 2022 and preparing to pursue the NFL reporter.

Such a high-profile hire would help the sports betting platform present itself as a media company in addition to a gambling enterprise, a perception Caesars has tried to create in recent months by hiring former ESPN personalities like Trey Wingo and Kenny Mayne. McCarthy and Perez also speculate that FanDuel and DraftKings could take a run at Schefter in an attempt to add an acclaimed NFL news-breaker.

These rumblings publicly circulating now raise the question of whether or not someone is trying to change the conversation. Is this something Schefter’s people floated out there to show that his talents are in demand by outlets other than ESPN? Is Caesars Sportsbook trying to hitch onto the conversation, letting it be known that the company wants to pursue insiders like Schefter for its operation?

Related: ESPN’s Adam Schefter on sending entire CBA story to Bruce Allen for “edits”: “Looking back, I shouldn’t have done it.”

Leaving ESPN wouldn’t appear to be the best career move for Schefter. He has arguably the sport’s biggest platform right now throughout ESPN’s variety of programming, including Sunday NFL Countdown, SportsCenter, NFL Live, Monday NFL Countdown, Get Up, and whatever specials the network airs surrounding events like the NFL Draft and free agency.

McCarthy and Perez even quote a source that said ESPN doesn’t want to lose Schefter and letting him expand his presence across the network’s platforms demonstrate how important he is.

ProFootballTalk’s Mike Florio writes that there has been growing buzz in NFL media circles that Schefter has been interested in jumping to one of the sports betting companies, calling it “an open secret” in the industry. The Front Office Sports report obviously now makes that less of a secret.

With such a move, Schefter would obviously be presuming that his name, brand, and reputation as a veteran, well-known NFL reporter would be enough to bring fans, followers, and observers with him to his new platform, whether with Caesars Sportsbook or another sports betting company. Schefter would be, ahem, betting on himself.

ESPN would appear to have several candidates to replace Schefter if this came to pass. Jeff Darlington, Dianna Russini, and Dan Graziano are among the network’s other reporters. Whether or not they have the same network of contacts and sources throughout the league would have to be determined, but their profile and access are already established and would presumably increase significantly if they were moved into that top insider role.

There’s also the possibility that ESPN could target another insider from another network, such as the network did when hiring Schefter away from NFL Network. Fellow insiders Adrian Wojnarowski and Jeff Passan were plucked from other outlets for their current roles.

Speaking of Wojnarowski, McCarthy and Perez say that ESPN’s NBA insider could be another target for sports betting companies looking to add credibility with big-name news-breakers in months and years to come. As outlets like ESPN continue to pare down staff and cut salaries, gambling platforms are ready where the money appears to be these days.