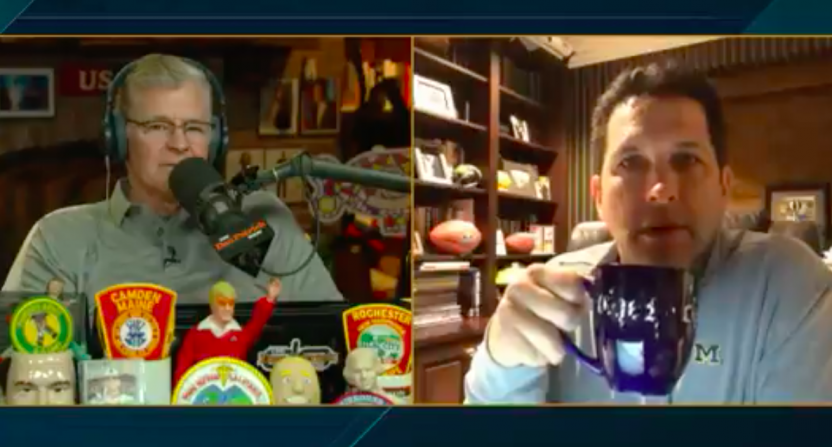 When Adam Schefter dropped the bombshell that Aaron Rodgers was “disgruntled” with the Green Bay Packers and had been telling people that he didn’t want to play for them, it was a scoop that overtook everything else that would occur later on during the opening night of the 2021 NFL Draft. That’s no small feat and a testament to what a big deal this scoop was and how well-timed the breaking news ended up being.

Reigning MVP Aaron Rodgers is so disgruntled with the Green Bay Packers that he has told some within the organization that he does not want to return to the team, league and team sources told ESPN on Thursday.

The timing seemed so precise, as to own the media space for the rest of the day, and force the Packers into making some kind of decision during the draft, that many started to wonder if it had been specifically planted to be released by Rodgers’ camp or by someone else with a vested interest. Perhaps the Packers wanted this news out there to paint Rodgers in a bad light? Perhaps a team that was attempting to cut a deal with Green Bay wanted to grease the wheels?

Schefter appeared on The Dan Patrick Show on Thursday and was asked about why he decided to announce the big news on that day. Turns out, per Schefter, his scoop wasn’t based on a specific source or leak, it was simply an “accumulation of information.”

DP: "You chose to break the [Rodgers] news on Draft Day?"

Schefter: "That is absolutely accurate, correct. It was nothing that morning that came in that all of a sudden said to me yeah he wants out, you should report this… It was just an accumulation of information". pic.twitter.com/SJEPv3ssLu

Dan Patrick: Walk me through that. Did you get a phone call or a text?

Adam Schefter: You know Dan, the funny part about it is, I heard people say ‘Oh, Aaron Rodgers wanted that out before the draft.’ I can assure you Aaron Rodgers did not want that out before the draft. I’ve had people say ‘The Green Bay Packers planted that. It was a very pro Packers story.’. I can assure you the Green Bay Packers didn’t plant that. When people guess at where stories come from, more often than not, they’re usually wrong. And in this case, they’re wrong. This was an accumulation. All during the offseason, of just listening to people talk. And observing. If we go back to the NFC Championship game that the Green Bay Packers lost at home, did we not hear Aaron Rodgers after that game talk about his level of unhappiness, if you will. Uncertainty for the future. Just go back and listen to that press conference and it sounds almost like he’s saying goodbye to Green Bay. And so, you’re antenna’s up. And I’m just telling you throughout the course of the off-season, there was rarely a week that went by without where I didn’t hear something about Aaron Rodgers. And on draft day, there’s a report that morning by Paul Allen out in Minneapolis that the 49ers made a draft offer, which, they didn’t make a draft offer, they never made an offer. And other people saying that the 49ers called, and I said, how long till it gets out that Aaron Rodgers wants out of Green Bay? Is it next week? Is it when he doesn’t show up to the OTAs? …It’s gonna come out. What does it matter if it comes out now or next week or next month?

Patrick: So you chose to break the news on draft day?

Schefter: That is absolutely accurate. Correct.

Patrick: But it wasn’t something that you got information about…

Schefter: No…and there was nothing that morning that came in. No one said to me, ‘yeah he wants out, you should report this.’ It’s like, it was going on all offseason. You just keep hearing and there’s more and more talk, and now there’s starting to be Aaron Rodgers talk and I said, you know what, this isn’t gonna wait much longer. And it just happened to be draft day.

Patrick: Because I wondered when you said it didn’t come from Rodgers, didn’t come from the Packers, and it’s being characterized differently, I was wondering, okay, you’re not gonna tell me your source, what was the motive behind that?

Schefter: Dan, there’s not a source.

Patrick: No, no, I know that now, but we’re just finding this out right now.

On paper, what Schefter is saying makes sense. That, over the course of an offseason, if enough information piles up from credible sources or connections, you might feel inclined to report that information with a degree of certainty. But what Schefter dances around and doesn’t seem to want to engage with is the fact that, purposely or not, he dropped this bomb on draft day and remade the entire news cycle.

Also, that explanation doesn’t 100% jibe with Schefter’s original tweet, which read “league and team sources told ESPN on Thursday.” That implies that Schefter did speak with someone or multiple people that day, which contradicts what he said to Patrick. Even if that just means he confirmed with a couple of people that he’d previously spoken to, that’s worth noting.

Schefter says that people can believe what they want, and his answers probably aren’t going to convince many of them that it wasn’t a tactical move on his or ESPN’s part. Right or wrong. New York Post reporter Andrew Marchand, who breaks his fair share of news, explained why Schefter might have just been better off not explaining himself.

On Schefter and Rodgers, a reporter can't win when trying to explain a scoop using anonymous sources because there is too much you can't answer. +

If you explain yourself, like Schefter tried on DP Show, you leave yourself open to questions you can't answer. Specifically, where the information came from. Since you won't answer that question, there is no way for a full explanation. People will draw their own conclusions.

Another likely misnomer on the Schefter-Rodgers "story about the story," I would bet that Schefter reached out to folks on the Thursday of the draft to button up his reporting.

Of course, the point is fairly moot since, as Schefter said, this was something that was clearly true and clearly going to come out eventually. Whether people want to assume that Rodgers made this happen, the Packers made it happen, or Schefter wanted to be the one to break the story big, it ultimately proved what a massive league-shaking scoop this was.