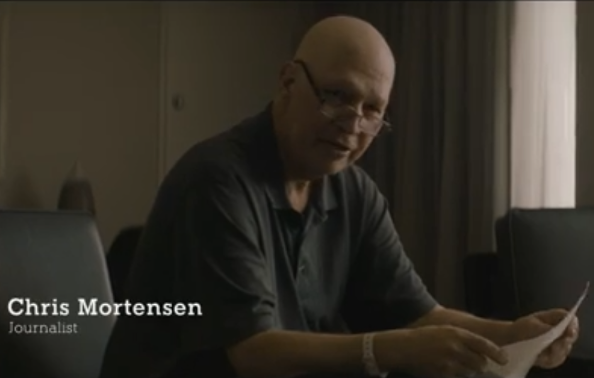 Gatorade’s new “Dear Peyton” campaign has a variety of people impacted by Peyton Manning speaking into a camera about what he meant to them, and one of them is ESPN journalist Chris Mortensen. Mortensen has been on hiatus from the network since January while undergoing treatment for throat cancer, but still broke the story of Manning’s retirement in March. The video has Mortensen talk about his relationship with Manning (and with his father Archie), and about how Peyton called him to give him the retirement scoop, but had him hold it for a day:

It’s an emotional video given Mortensen’s battle with cancer, and it fits in with the tone of the other commercials in this series, but it’s still somewhat unusual to see an ESPN journalist talk in a commercial about his relationship with an athlete he covered. ESPN personalities doing commercials isn’t new (for one, Mortensen and fellow ESPN NFL insider Adam Schefter did an odd pizza commercial on Twitter on New Year’s Eve, and plenty of other ESPN personalities have done commericals), and ESPN reporters talking about people they cover isn’t new (although it can lead to problems; see Schefter on Greg Hardy), but the mix here is a little different.

There probably won’t be too much criticism here (other than perhaps from Patriots’ fans still upset with Mortensen for his Deflategate reporting) given the circumstances and the emotional tone, and it doesn’t appear as if Mortensen did anything wrong in his Manning coverage, but this does raise some issues that ESPN may want to consider going forward. It’s worth discussing if and when it’s appropriate for reporters (as compared to analysts and other personalities) to do commercials and when it’s appropriate for them to discuss their relationships with those they cover. There’s nothing particularly wrong with this Mortensen video (and in some ways, it’s refreshing that Gatorade finds a reporter’s perspective notable enough to include in an ad campaign like this), but the intersection of reporters, athletes and brands is worth monitoring carefully; just because it worked out on this front doesn’t mean it always will.