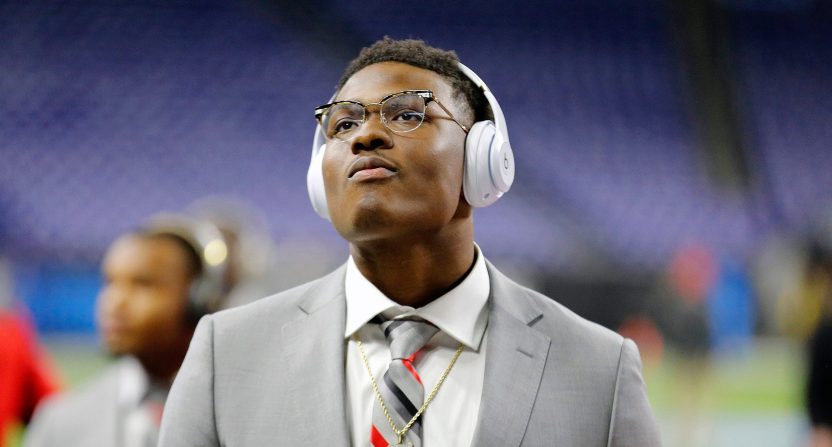 “I am devastated and at a loss for words with the unfortunate passing of Dwayne Haskins,” Steelers coach Mike Tomlin said in a statement. “He quickly became part of our Steelers family upon his arrival in Pittsburgh and was one of our hardest workers, both on the field and in our community. Dwayne was a great teammate, but even more so a tremendous friend to so many. I am truly heartbroken.

“Our thoughts and prayers are with his wife, Kalabrya, and his entire family during this difficult time.”

Ron Rivera, Haskins’ coach at Washington, also released a statement, saying he was “absolutely heartbroken to hear the news.”

Haskins threw 50 touchdowns in one starting year with the Buckeyes and was drafted in the first round by the Washington Commanders in 2019 but was released after the 2020 season. He signed with the Steelers this past season but was inactive for all but one game. Expected to be in the mix for the quarterback position this season, he signed a one-year contract with the team in March.

The news spread quickly through social media and the NFL world, which means that ESPN NFL insider Adam Schefter was among the first to report the news. However, the way that Schefter discussed Haskins, focusing on the struggles he faced as an NFL player, rubbed a lot of people the wrong way. 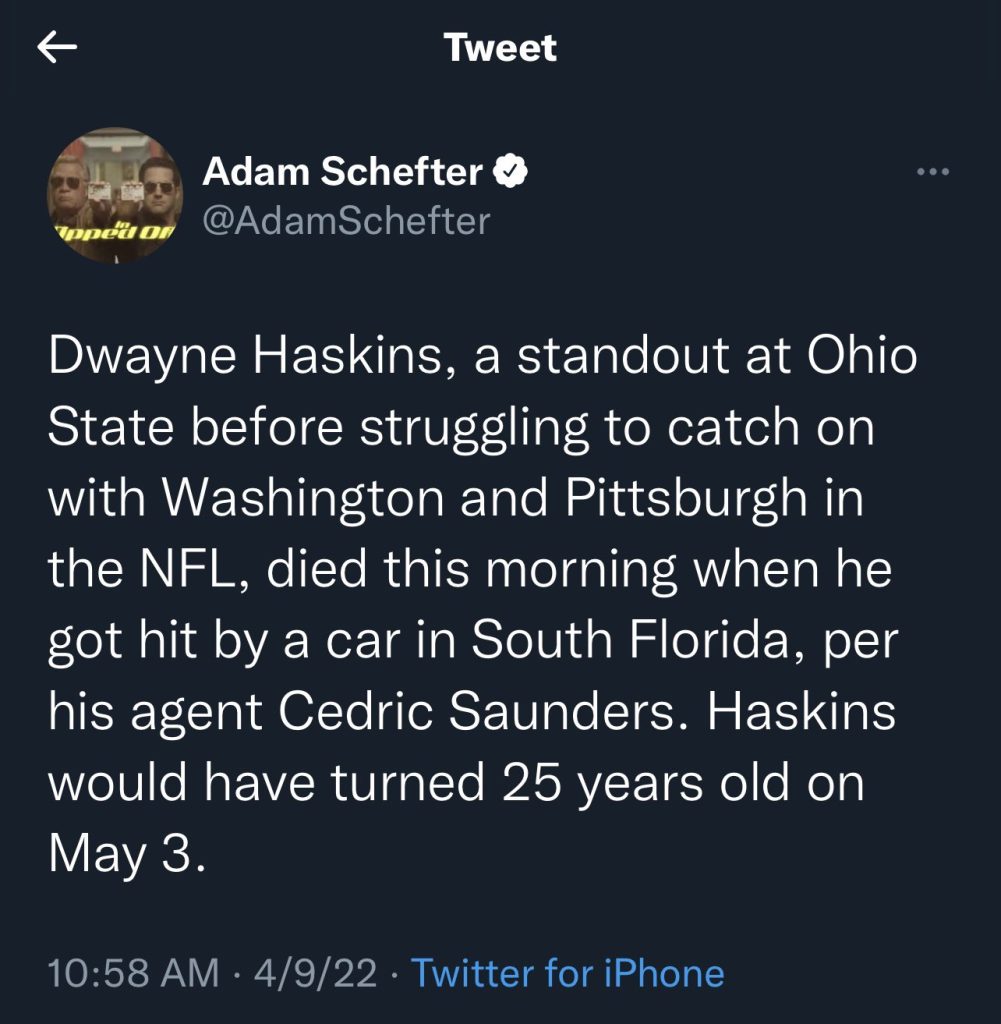 “Dwayne Haskins, a standout at Ohio State before struggling to catch on with Washington and Pittsburgh in the NFL, died this morning when he got hit by a car in South Florida, per his agent Cedrick Saunders,” wrote Schefter. “Haskins would have turned 25 years old on May 3.”

There are plenty of ways to describe Haskins aside from calling out how he’s been “struggling to catch on” in the NFL during an announcement of his death.

After the tweet went viral for all the wrong reasons, Schefter deleted it. However, plenty of people around the football world, including some of Haskins’ fellow Ohio State alumni, NFL teammates, and other players from around the league, caught wind and commented on it first.

How about “ Dwayne Haskins, son, husband, buckeye brother, friend, beloved teammate has passed away” TF his career ups and downs have to do with him unfortunately losing his life??‍♂️ STFU! Let his family & friends grieve instead of throwing shade. Praying for the Haskins family!! pic.twitter.com/gb1D9KcgCQ

You gotta do better @AdamSchefter !!! This is wild!! A MAN lost his life!! https://t.co/BowSkkLw66

Athletes for the record.. the shit @AdamSchefter wrote that’s how a lot of people view us.. we ain’t shit but entertainment!.. if you let 1 treat you with disrespect the rest will follow…

And Schefter received plenty of scorn and disdain from the sports journalism world as well for the framing of the news.

It’s really this simple: Be a human being. Have empathy. Everyone you meet is loved and has people they love. Individuals have full lives that extend far beyond a damn job.

Adam Schefter, a standout at the Denver Post before becoming a PR laundering hack who abandoned any moral compass so that he could report contract structure details 5 minutes before everyone else,

we have to get schefter out of here. that’s so disrespectful my god.

Paying the man like $10M but you still can’t teach Adam Schefter empathy.

Adam Schefter has now had to delete multiple important breaking news tweets in the last few weeks bc he can’t seem to figure out how not to editorialize while delivering sensitive information. The ppl he’s reporting on deserve better.

Young journalists, learn from the way Adam Schefter has conducted himself in the last year or so. He has lost all integrity. He may have a lot of information, but he’s a shit journalist.

It’s just the latest in a long line of unforced errors and mental gaffes that have tarnished the reputation of ESPN’s top NFL insider over the last few years.

He’s been accused on several occasions of allegedly doing an agent’s work for them in generating buzz around their client.

Last year, during the Jon Gruden email leaks, it was revealed that, in 2011, he handed a story over to then-Washington GM Bruce Allen, whom he referred to as “Mr. Editor,” so that the team executive could look it over before Schefter published.

In October, Schefter suffered another journalistic setback that saw him make two half-assed apology attempts for his indefensible reporting of the Dalvin Cook lawsuit. Schefter appeared to have carried water for a person about to be publicly outed over domestic abuse charges and looked terrible for it.

Just weeks ago, Schefter once again stepped in it when a grand jury declined to bring criminal charges against Deshaun Watson over various sexual assault allegations and he referred to it as the “truth” coming out, even though a grand jury doesn’t decide guilt or innocence. He later apologized for the framing, saying that it was “poorly worded” and meant to illustrate the defense’s strategy.

All of this is to say nothing of the times Schefter just tweets out weird stuff that defies what we know about being a journalist.

In spite of all this, Schefter remains valuable enough to ESPN that they re-signed him to a lucrative extension last month, touting his ability to break news and influence the daily sports ticker while under their banner.

However, Schefter, more than any other “insider,” also brings this kind of baggage with him. And it’s hard not to wonder if there’s a point where Schefter’s access isn’t quite as valuable when compared to the negative PR and journalistic gaffes he infers onto ESPN. Ian Rapoport does a pretty similar job to Schefter but rarely seems to find himself in these kinds of messes.

Usually, a company like ESPN can ride these kinds of moments out because they’re few and far between. But with Schefter, it’s starting to become a regular occurrence. And given that he is truly one of the leading voices of breaking NFL news in America, that’s not good for anyone, let alone the young man who lost his life today.