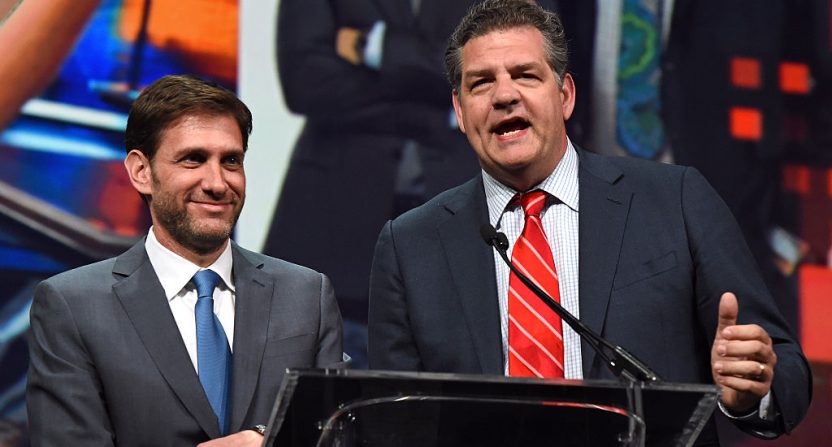 From 2000 to 2017, ESPN Radio listeners could tune in every weekday morning to hear Mike & Mike, where hosts Mike Greenberg and Mike Golic would discuss the sports news of the day. The show’s popularity grew in 2004 when it began simulcasting on ESPNews, eventually moving to ESPN 2 in 2006. The duo became staples of ESPN TV and radio programming for the decade to come.

Mike & Mike were eventually inducted into the NAB Broadcasting Hall of Fame in 2016, but by the time 2017 came around, there were rumors and reports about acrimony between the longtime co-hosts. Greenberg’s desire to break out and work on television appeared to be at the heart of the matter while Golic openly mused about potential replacement co-hosts he could work with. The official announcement came down in May 2017 that Greenberg would be leaving the radio program to host what would become Get Up! while Golic would remain on the radio alongside new co-host Trey Wingo and son Mike Golic, Jr. Rumors of a “poisonous relationship” between the two Mikes swirled as the show neared it’s December 2017 end date, though Golic denied the severity of issues, saying “Greeny and I have talked. Greeny and I are fine.”

The two went their separate ways in 2018 but recapturing their past success was hard to pin down for both. Trey Wingo reportedly wanted out after two years in the morning radio role and ESPN removed the radio program from their new lineup this year, ending Golic’s 22-year stint as a morning host with them. Golic signed off in July and will now call college football games for ESPN and ABC (if there are any).

Meanwhile, ratings for Get Up! were low right from the start and the show went through several retoolings. Football appeared to be a saving grace for the program but there have been missteps along the way. However, the show continues to stay the course even as Greenberg returns to radio with his new solo endeavor “Greeny.”

With both sides having moved on and with a few years’ distance, enough time has passed for a little perspective. Golic recently stopped by Barstool’s Pardon My Take podcast to talk about college football and the conversation eventually dipped into where his relationship with Greenberg currently stands. According to him, pretty much nowhere:

“It did not end well, that’s pretty much been public. I was surprised it ended. The guy who was running ESPN at that time, John Skipper, ended it, and Greeny wanted to go do his own thing. So I was surprised it ended, and obviously it’s been pretty documented that I didn’t like the way that it ended. I would say, Greeny and I, we’ve seen each other since, but he does the morning show with “Get Up” and I was doing the morning show, so we would have really no interaction in the morning. We always lived far away from one another, and outside of Mike & Mike, we never really hung out. His kids weren’t even born when we started the show, so we never really had a lot in common, and I think that’s one of the things that helped make Mike & Mike work a little bit, is that we were so different. We have seen each other at Super Bowls – we’re cordial, but that’s pretty much it.

In all honesty, there really isn’t much of a relationship anymore. It’s a shame, but that’s just the way it goes sometimes and that’s where it is now. Who knows what the future holds, but right now, that’s pretty much where it is.”

Golic’s wife Christine claimed in July that he had offered to do a reunion show with Greenberg but ESPN declined the offer. Regardless, Golic has hinted at a desire to return to morning radio at some point in the future, but it seems rather unlikely that it will be alongside Greenberg ever again.