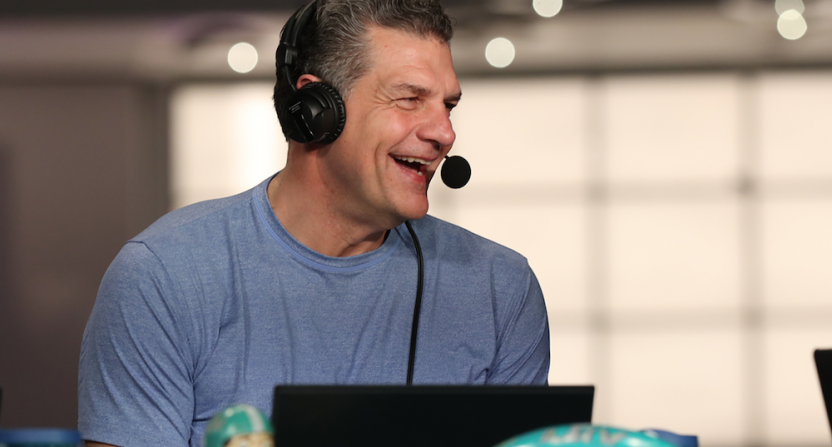 Mike Golic’s long run on ESPN Radio reached its end Friday morning with the final Golic and Wingo show signing off. Between 18 years co-hosting Mike & Mike with Mike Greenberg and the past four years with Trey Wingo, Golic has been the voice of ESPN Radio mornings for the past 22 years.

Friday’s show wasn’t entirely a four-hour victory lap for Golic, packed full of tributes, memories, and guests. There was still sports talk, as Golic, Wingo, and Mike Golic Jr. recapped and reacted to Thursday night’s restart of the NBA season, talking to ESPN’s Dave McMenamin. The Athletic’s Jayson Stark called in to talk about MLB’s difficulties with COVID-19 in its first week. And Iowa football coach Kirk Ferentz was also a guest on the show.

But there was plenty of reminiscing throughout the show with favorite clips and outtakes from Mike & Mike and Golic and Wingo played before and after commercial breaks. (Several of the clips provided a reminder that Mike & Mike, especially, wasn’t just a simulcast of a radio show on TV. There were bits made for television with Golic doing physical comedy or dressing in goofy outfits.)

As fans of Golic might expect, many of the moments were self-deprecating.

Always enjoyed when an ESPN staffer had no clue Mike Golic played in the NFL: pic.twitter.com/OS1CihceAz

One guest that could be expected for Golic’s final show was former Georgia Tech, Alabama, and Kentucky football coach Bill Curry, who was also a college football game analyst for ESPN.

While looking back at his radio tenure on Sarah Spain’s podcast earlier in the week, Golic said Curry was one of his favorite guests, citing his wisdom and soft-spoken voice that would draw listeners’ attention.

What can we learn from the huddle in sports?

“I wish our friendship started earlier, but we know it’ll last for the rest of our lives,” said Golic, going on to tell Curry that he was one of the people he respected most besides his father and one of his high school coaches. “I love you and appreciate you, and I look forward to seeing you, hopefully sooner rather than later.”

Stugotz (Jon Weiner) from The Dan Le Batard Show, who appeared on Golic and Wingo each week, also called in to send Golic off with some kind words.

Our friend @Stugotz790 with heartfelt words for the guys.#ThankYouGolic pic.twitter.com/n8Rg4ikMDv

But the final hour of the show belonged to Golic and his family, which has been a part of his broadcasting career for so long. (No offense to Wingo, who graciously ceded the stage to his co-host in those final moments.)

Honestly how fuggin great is my dad though???

It’s been a huge part of Golic’s appeal over the years, bringing listeners into his family, but also making him extremely relatable to the audience. Golic has talked about mothers expressing appreciation for doing radio that they could listen to while taking their kids to school and incorporating his wife and children into stories he’d tell on air was a big part of that.

Sometimes, Golic’s sons and daughter were surprised to hear that what happened at home might be fodder for a funny story told on the air. And embarrassment at school might ensue.

There was no long monologue from Golic, no virtual Academy Awards speech in which he thanked his many colleagues and guests from 22 years at ESPN Radio.

But not having a prepared statement drawn up was consistent with what’s made Golic such an enjoyable personality for decades. He’s never been polished (though he’s always been professional). He’s often been the guy many of us imagine we’d be if we were on the radio. Funny, knowledgable, and heartfelt. Sometimes, the jokes didn’t land or were wincing examples of “dad humor.” But it always came across as genuine.

And nothing could be more genuine than the final remarks Mike Golic Jr. made before Golic and Wingo signed off and Golic Sr. moves on to the next stage of his career with ESPN. Golic Jr. became understandably emotional while paying tribute to his father, saying “Even after we turn off the mics, you still get to be our dad.”

“Even after we turn off the mics, you still get to be our dad.”#ThankYouGolic pic.twitter.com/kqhR3gPmpB

“When we grew up, it was such a big thing, and Mike & Mike became this huge phenomenon, there was so much that came along with that,” said Golic Jr. to his parents.

“You always made sure it was about us. And you always made sure you were around for the stuff that we did. We felt that and we saw it, and it meant so, so much to grow up feeling like you could do anything because you two made that possible.”

How often does sports radio bring an audience to tears?

Plenty has been said about ESPN Radio booting Golic from its everyday lineup. (And Golic himself has said he preferred to stay.) But it was a nice touch by the network to give Golic and his family that moment, which was so deeply deserved.

Sharing that with the audience displays a legacy far greater than any sports radio takes, interviews, and goofy bits from the past two decades. And it made for some powerful, poignant, memorable radio Friday morning in an ideal sendoff for Mike Golic.