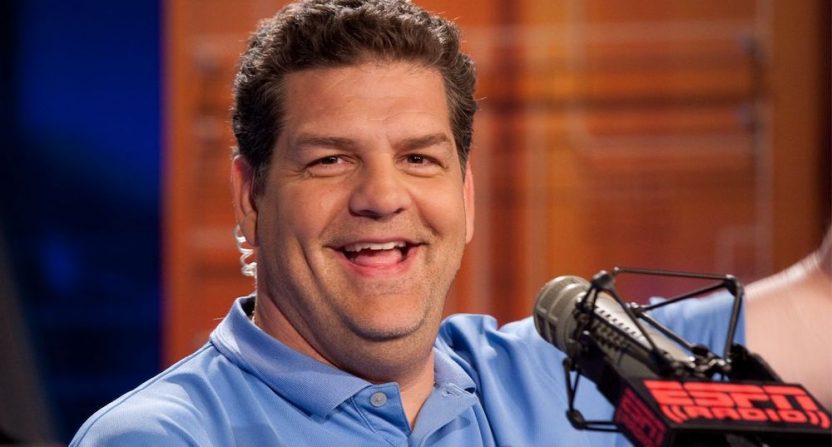 Mike Golic’s nearly 25 years as a morning host on ESPN Radio ends on Friday (July 31) and with that final show approaching, he’s looking back at that impressive run as that sign-off approaches.

Appearing on Sarah Spain’s That’s What She Said podcast, Golic was asked about both of his morning shows, Mike & Mike and Golic and Wingo — apparently ending because his co-hosts wanted to move on. As he explained, the two situations are different because Mike Greenberg wanted to break off and do a new show while Trey Wingo reportedly didn’t enjoy working that early-morning shift.

And in the case of Mike & Mike ending, Golic knew he still had a show afterward.

“Greeny wanted to go do something else, and that’s all been well-documented,” said Golic (beginning at the show’s 11:54 mark). “I wish he’d have come to me and kind of was a little more upfront about it. But that’s obviously in the past.

“Listen, everybody has a right to try and go do what they want. He wanted to do something else. But I knew I was keeping the morning show. It was just gonna be different and the great part was having my son. You know, there was talks of Jason Fitz, of Stugotz, and certainly of Trey. And Trey’s familiarity with me and being around the company for a long time, especially being the football guy, seemed like a good fit.”

Mike Golic on his 2 morning shows reportedly ending because his co-hosts wanted to move on: pic.twitter.com/K29R7m0L0H

Golic also made it clear, however, that he didn’t want to speak for Wingo in regards to doing a daily morning radio show.

The former NFL defensive tackle also took issue with about how he found out Golic and Wingo was ending, getting the news via media reports rather than being told directly by ESPN executives.

“Unfortunately, the tough thing this time around is I basically heard it was ending through the media,” Golic said, “which, to me, isn’t the best way to find something out.”

“I don’t think that’s the right way. But they didn’t ask me what I thought was the right way. At the end of the day, it’s business. I’ve always said this about football or doing anything, you gotta be careful at taking things too personally.”

Mike Golic on how he found out ESPN Radio wanted to make a change: pic.twitter.com/dCHCThFvky

But Golic’s interview with Spain wasn’t a gripe session or airing of grievances. That was only a small part of the conversation and arguably stands out because that’s how Spain began the interview. Yet Golic acknowledged that this comes up recurringly because it’s what reporters want to talk about most with him.

“I have never been a locker room-talking guy,” Golic said. “Someday, I will tell the full stories of everything but now is not the time. But that didn’t mean I still couldn’t talk about the end and how it went.

Mike Golic enjoyed being the show mother’s didn’t have to turn off while driving the kids to school: pic.twitter.com/86Wl3MvXpN

Otherwise, the hour-plus conversation was something of a much-deserved victory lap for Golic. How did he evolve as a radio personality? What lessons did he have to learn? What were his favorite recurring bits and segments? Who were his favorite guests over the years? And he’ll certainly get a chance to look back and celebrate his 22 years on ESPN Radio during Friday’s final Golic and Wingo show.

It’s been a truly impressive run in which Golic was a morning staple for sports fans young and old. Those who say they grew up with Golic as they developed a love of sports and enjoyment of radio aren’t exaggerating. Some might take issue and grumble with Golic’s style of radio playing it safe to appeal to the widest possible, even non-sports, audience. His comment about mothers enjoying not having to change the station will make some eyes roll.

But Mike & Mike nor Golic and Wingo weren’t for the hardcore sports fan. Yet many of them still listened because it was the most prominent sports talk morning show going. The results can’t be disputed.