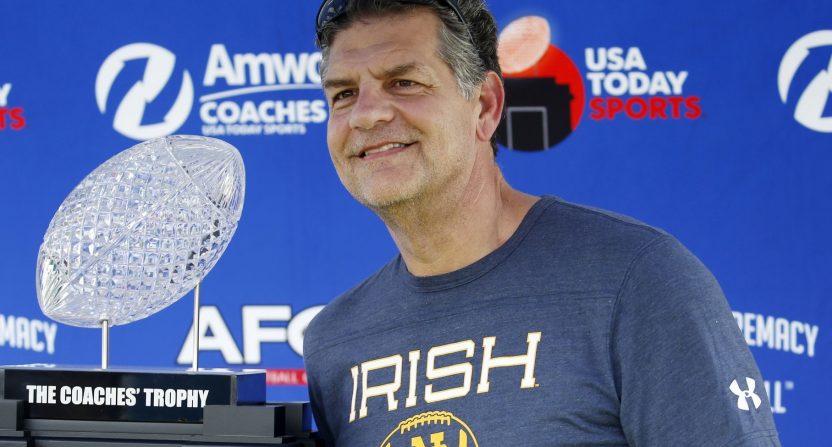 Mike Golic appeared to be out of a job at ESPN for the first time in 20-plus years. But as expected, he’ll stay with the network at least until his contract expires at the end of 2020.

Golic announced on Monday’s Golic and Wingo show that he’ll be a college football analyst for the network after finishing up at ESPN Radio July 31. In addition to calling games from the booth, he’ll also provide analysis for College Football Live and SportsCenter, where he’ll also talk about the NFL.

After leaving ESPN radio later this month, @espngolic will do work as a college football analyst for ESPN. He will now do what he did during his first 10 years at ESPN.

Last week, the network announced a new lineup for ESPN Radio that didn’t include the former NFL lineman after 18 years co-hosting the Mike & Mike morning show with Mike Greenberg, followed by nearly three years paired with Trey Wingo in the mornings on Golic and Wingo.

As Golic’s many current and former colleagues paid tribute to his long run on ESPN Radio and television, the question became what he would do next. Radio obviously isn’t part of Golic’s future at ESPN (though according to Golic’s wife, Christine, there were attempts to reunite with Greenberg, who will now host his own program from 12 p.m. to 2 p.m. ET).

Soon thereafter, however, The Athletic’s Richard Deitsch reported that he heard from several sources that Golic would likely move over to calling college football telecasts for ESPN. Hired by ESPN in 1995, Golic was a game analyst through the 1998 college football season, following stints on NFL2Night and NFL Live, and prior to hosting a morning show on ESPN Radio, originally with Tony Bruno.

As Golic mentioned, he’ll likely appear on Mike Golic Jr.’s new ESPN Radio show with Chiney Ogwumike from time to time and will likely pop up on shows throughout the new lineup during college football season. Considering his long radio experience, it’s also not difficult to imagine that Golic could do a podcast for the network if that’s something in which he’s interested.