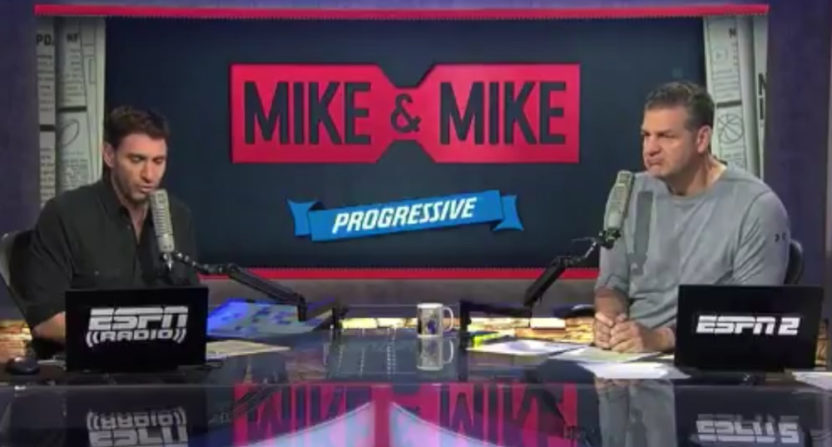 Mike Golic is in essence calling a story that his relationship with Mike Greenberg has deteriorated to the point where they ignore each other, “fake news.”

Last week, Sports Illustrated published a story citing sources who described the relationship between ESPN Radio co-hosts Mike Golic and Mike Greenberg as “poisonous,” saying that the two hardly speak to each other and staffers feeling their long-running show will end before its projected finale in December. Greenberg will be leaving the show to host a morning program on ESPN. Golic will remain at ESPN Radio and will welcome Trey Wingo as his new co-host.

But Golic disputes the story that said he and Greenberg are “marvelous actors on set,” barely make eye contract and that they “virtually ignore each other.”

Speaking last week at an event at Saint Mary’s College in South Bend, IN, Golic was critical of ESPN staffers who anonymously spoke to Sports Illustrated:

“Greeny and I have talked. Greeny and I are fine,” he said. “In all honesty, I had more of a problem and was a little disappointed that people that work on my show would anonymously throw stuff out there. I’m not a big fan of the anonymous thing.

“If you can’t put your name to it, I don’t know why you’d say it. But Greeny and I are fine. We absolutely are.”

And Golic says it’s not time to shed tears about the end of the show because he doesn’t know when that will be.

“There’ll be time, once they tell us, ‘This is the plan for the end of the show,’ and then we can start planning some of those things to end the show. We’ll probably do more giveaways for fans, because if we didn’t have the listeners and viewers, there’s no way this show goes 18 years.”

If it were up to Golic the show would end before football season, but he added, “they didn’t ask me.”

So Golic is countering the SI story and is vehemently denying that he and Greenberg aren’t speaking. This soap opera has a few months to play out so we’ll see where this turns next.