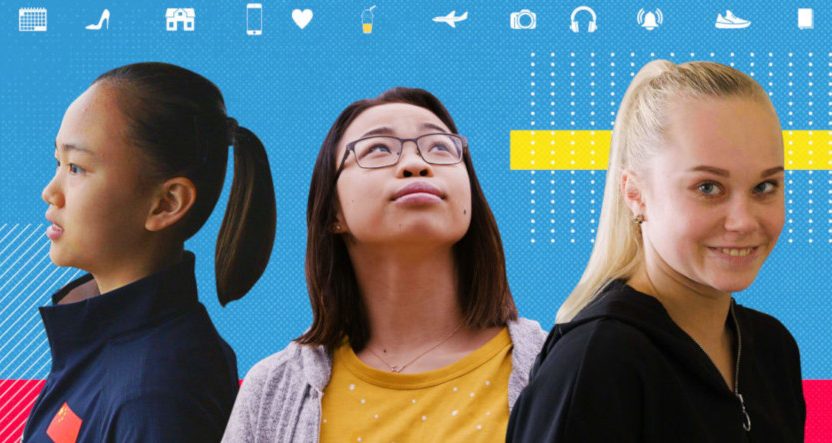 We’ve seen quite a few documentary projects covering the in- and out-of-competition lives of athletes over the years, ranging from the likes of HBO’s Hard Knocks and 24/7 (on the NFL and boxing, respectively) to Showtime’s A Season With, Netflix’s Last Chance U and various other efforts on specific NCAA teams to NHL projects, esports projects, and a variety of Amazon efforts across sports. And there have been some of these on individual athletes too, from Facebook shows with Tom Brady, Steph Curry, and NBA and NFL draft prospects. But what the Olympic Channel is doing with their upcoming project All Around seems like an interesting twist on the formula.

All Around (produced by London-based Noah Media Group) will follow three promising gymnasts for a year “as they balance their personal lives, training regimens and competitions throughout the year and culminating at Tokyo 2020.” Their selected athletes are Morgan Hurd from the U.S., Angelina Melnikova from Russia, and Chen Yile from China. And the series will follow them with quickly-released episodes that take place soon after the events they portray, unlike the likes of Last Chance U or All Or Nothing, seires that usually come out well after the season they cover finishes. Here’s more from the Olympic Channel release on the series:

With just over a year to go to the Olympic Games Tokyo 2020, the Olympic Channel’s new original series All Around follows the personal journeys of three elite gymnasts in real time over the course of a year on their road to Tokyo. Featuring the United States’ Morgan Hurd, Russian Federation’s Angelina Melnikova and China’s Chen Yile, the behind-the-scenes documentary series launches on Tuesday, 6 August with new episodes released monthly on the IOC’s Olympic Channel which is available worldwide at olympicchannel.com, its mobile apps and on connected TV devices.

…Interweaving the stories and parallel journeys of Hurd, Melnikova and Chen, All Around provides viewers with unprecedented access to these elite athletes and everyday teenagers

“I am so excited and grateful to have the opportunity to participate in this series with Olympic Channel,” said Hurd, 17, the 2017 Artistic Gymnastics All-Around World Champion from Middletown, Delaware. “I hope to share with viewers a behind the scenes look at what really goes on off the competition floor and to bring about a new understanding for how mentally and physically challenging gymnastics is. Fans are going to get to see in All Around the most important year of my life.”

“I’m so excited about this series,” said Melnikova, 18, who is already a team silver medallist at Rio 2016, is a two-time Russian national all-around champion and the 2019 European Games Women’s All-Around Champion from the town of Voronezh. “The cameras will be following me everywhere, and I’m really looking forward to sharing what it’s like to be a top gymnast. Especially in such an important year ahead of Tokyo 2020!”

“I am very excited to show the world what it’s like to train as one of the Chinese gymnastics athletes pursuing Olympic dreams as part of the Olympic Channel series All Around,” said Chen, 17, the 2018 Asian Games Women’s All-Around Champion who was born in Jiangxi, China. “I look forward to the next 12 months as I work hard day-by-day to achieve my dream of representing my country proudly at the 2020 Tokyo Olympic Games.”

Here’s a trailer for the series:

Doing something like this feels like a good fit for Olympic Channel given their global focus. And they’ve previously dove into some sports stories from around the globe with some longer-form documentaries, including The People’s Fighters (on Teofilo Stevenson and Cuban boxing) and The Golden Generation (on the Manu Ginobili-led 2004 Argentina basketball team), and they’ve done some behind-the-scenes material as well (such as this March’s The Z Team episode on Christian Laettner trying to turn around a struggling high school basketball team), so they have some past projects to build on.

This also fits with the Olympic Channel’s idea of telling the stories of top athletes between editions of the Olympic Games, and illustrating how difficult it can be to reach that stage. This may be worth keeping an eye on, especially for gymnastics fans. And if it draws a decent audience, we may see more along these lines showcasing other athletes’ quests to reach the Olympics.