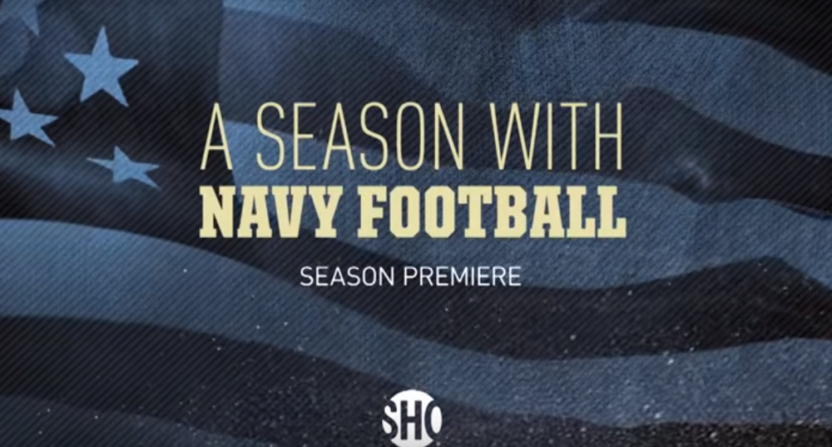 Showtime’s “A Season With” NCAA football behind-the-scenes show covered Notre Dame and Florida State in its first two seasons. This time around, they’re departing from the traditional powers and looking at a rather distinct side of college football, going behind the scenes with Navy. Showtime announced the news Tuesday in a release (after someone on Reddit found an episode preview listing mentioning Navy). Here’s a teaser promoting it:

And some quotes from their release:

“It’s an honor and privilege to be welcomed by the United States Naval Academy and given extensive access to its accomplished football program and prestigious institution,” said Stephen Espinoza, Executive Vice President and General Manager, SHOWTIME Sports.  “Special thanks are due to Naval Academy Superintendent Admiral Ted Carter, Director of Athletics Chet Gladchuk, head coach Ken Niumatalolo and the entire Academy. We look forward to taking viewers into the rarely seen world of a service academy, where student-athletes must not only balance the rigorous demands of an elite academic institution with top-tier collegiate football, but also prepare themselves for service in the Navy or Marine Corps.”

“This is a tremendous opportunity through the extraordinary exposure of SHOWTIME to share the character and impact of Navy football to the nation,” said Gladchuk.  “These stories have never before been told to the public and they will highlight the dedication and commitment reflected by our coaches and midshipmen who represent this program.  SHOWTIME is big time in telling the inside story and they will make these weekly episodes something you won’t want to miss.”

“It is an unbelievable opportunity for the Navy Football Brotherhood to be featured on SHOWTIME,” said Niumatalolo.  “We are excited to showcase the Navy Football culture.  We are extremely grateful to Stephen Espinoza and SHOWTIME for this once-in-a-lifetime opportunity and we are honored to work with Ross Greenburg and his talented production team.”

The documentarians should be able to get some good material, as Navy has generally been surprisingly accessible to media. And Showtime has previously covered Navy football, making the “A Game of Honor” film about the Army-Navy Game in 2011. There should be some solid angles covered here, too, as things are so different at Navy compared to your typical Power Five school. But it will be interesting to see what kind of audience this gets, as Navy football doesn’t necessarily have the fanbase of Notre Dame or Florida State, and they’re not in a power conference and are not really in the playoff picture most of the time. There could be wider interest from college football fans in general about what things are like at the Naval Academy, but a departure from the top powers is definitely something different for this series, and it carries some risk. We’ll see if that risk pays off.