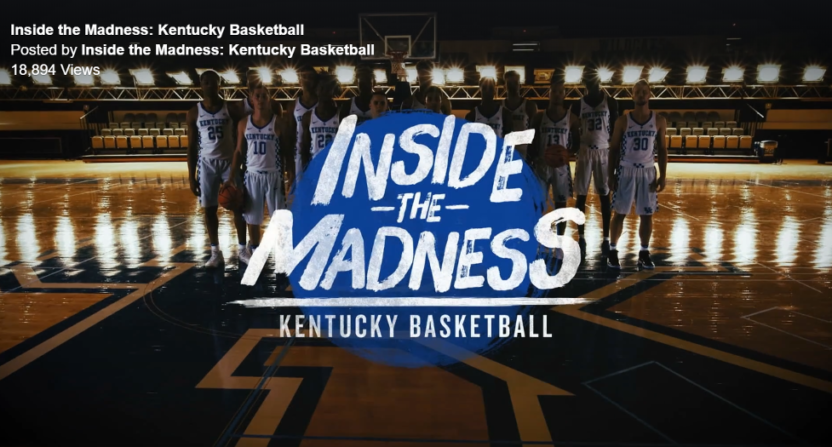 Facebook has been going big into sports shoulder programming, working with different media brands, athletes, teams, and leagues to launch Facebook Watch shows. The latest is a 10-part docuseries titled Inside The Madness: University of Kentucky Basketball, with the first episode dropping this Saturday (February 17). The series follows Kentucky’s team throughout the 2017-18 season, and comes from Crazy Legs Productions (who produced Showtime’s successful college football series A Season With) and Blue Eyes Entertainment. It will cover the coaches and players both on and off the court.

Here’s more on the series from Facebook’s release:

“This is the story of young men, led to be a team by their greatness and willingness to sacrifice, finding their way on the biggest stage in college basketball,” says Tom Cappello, Executive Producer for Crazy Legs Productions. “It’s an honor to be welcomed into the Big Blue Nation and we are excited to create a new experience for fans that will allow them to see a more personal side of the players and coaches that make up this team.”

Showrunner Jason Sciavicco (Creator and EP MTV’s Two-a-Days, EP Esquire’s Friday Night Tykes) has been impressed by the team opening its doors so wide. “A show like this has never been done with the Kentucky basketball program before and we are proud to give viewers a look inside the legendary program. Our cameras have been embedded with the team since November and viewers will see what it truly takes on and off the court to compete at the highest collegiate level for one of the most legendary coaches.”

…”We get approached all the time to do all-access shows,” Calipari said. “The one question I always have is, what is our why? Why are we doing this? As our fans know, we are transparent in everything we do so there is never a concern about the access we give. It’s, what makes this different than any other show? What I liked about Jason and Tom’s approach to this show is what they wanted to show. It wasn’t about the games or showing how I coach or a lesson in Kentucky basketball; it was about showing the type of kids we have here and the family atmosphere we’ve created. They wanted to show that there’s more than just wins and losses with these kids; it’s about preparing them for the rest of their lives. The great thing is their crew can do that while being of no distraction to our team and our goals. They’re around, but they’re a fly on the wall. We get to open the doors to our team in a way we’ve never done before while I coach my team and these kids learn.”

Here’s a trailer for the series:

The airing schedule has episodes dropping throughout February and March:

There are certainly going to be plenty of Kentucky fans interested in this, and it’s notable that their program has seemed pretty open to this kind of coverage. For example, last year’s ESPN 30 for 30 on Calipari, One And Not Done, had a lot of footage looking behind the scenes at the 2015-16 Wildcats’ season. And Calipari’s comments further the idea that they’re not too concerned about giving out access, which goes against the crackdown trend we’re seeing at a lot of college sports programs (especially with football). This is probably smart; exposure like this can certainly be a positive, especially as a recruiting tool, so it makes sense for coaches to be open to it when an opportunity like this comes around.

The larger question here may be if this series can make an impact beyond Kentucky fans, though. Yes, Kentucky’s a known brand nationally, and they may be able to pull in some fans of other college programs to at least check it out. This Wildcats’ team is notable, too, given their description as the youngest in school history and given the way they fell out of the AP Top 25 for the first time in 68 weeks (since 2014) last month. They’ve had plenty of ups and downs, too, sitting at 6-6 in conference (17-8 overall) heading into Tuesday night’s game against Auburn, and it could be worth watching to see how they’ve handled the various adversity they’ve faced; NBA fans may also have some interest in checking out prospective draft picks (three Kentucky players have been projected as likely 2018 first-rounders).

But there’s a massive glut of sports content out there, and one growing all the time with these different Facebook series. That’s a good problem for sports fans to have, as it offers a whole ton of choice. It makes it tougher on content creators, though, as it makes it harder to figure out what’s actually going to gain significant traction, and what sorts of efforts are worth repeating. And this series may run into particular issues given its timing, as a bunch of these episodes will be releasing during the NCAA tournament (which begins March 13 with the First Four).

If Kentucky makes a run in March Madness, there might be some further interest in this series. However, if the Wildcats leave early, it could be hard to convince fans of other programs to check out a series on a team whose season is over rather than content on teams still in the tournament. We’ll see how this series does, and if it spawns further behind-the-scenes documentaries on Facebook Watch.