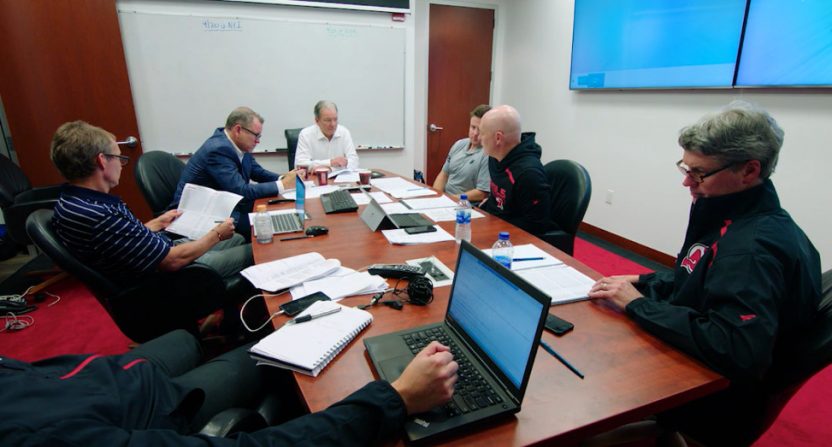 When NHL Network announced its Behind The Glass series on the New Jersey Devils’ training camp earlier this month, it sounded like an intriguing idea. Of course, there are plenty of all-access series out there, and the concept has previously been done successfully in the NHL with series like 24/7 (HBO), Road To The Winter Classic (Epix), and All Access: Quest For The Stanley Cup (Showtime). But a big part of the appeal of HBO’s Hard Knocks, the trailblazing NFL series in this realm, was its focus on training camp and players’ efforts to make the team. That’s a different look than just following teams and players during the season or the playoffs, and that’s something that hadn’t really been done on this scale in hockey. Looking at the over 50 players competing for 23 roster spots is a new approach, and one that helps Behind The Glass stand out.

Add in a compelling team to follow in the Devils (after finishing last in the Eastern Conference in 2016-17, last season saw them earn their first postseason berth since 2011-12 and push the Tampa Bay Lightning to seven games in the first round of the playoffs), interesting players like 2017-18 Hart Trophy winner Taylor Hall (the first Devil ever to earn that award as NHL MVP) and 2017 first overall pick Nico Hischier, and a preseason trip to Europe that will see them playing a preseason game in Switzerland and a regular-season opener in Sweden, and you have some pretty compelling content to cover. But can Behind The Glass make it an entertaining package, and something that appeals to hockey fans in general rather than just Devils’ fans? Well, the first episode (which debuts Wednesday at 7 p.m. Eastern on NHL Network) is rather promising.

Here’s a look at the intro:

We’ve seen the first episode, and it has a lot of what you’d hope for in a series like this. There’s an extended segment on Hall (including footage of him at the NHL media tour), with comments not just from him but from general manager Ray Shero. There are segments on veteran captain Andy Greene and head coach John Hynes, including a great locker room speech from Hynes about the stakes for veterans of keeping their job (“You’ve got to fight like hell to keep it!”), and there are plenty of looks at on-ice practices (including a broken nose for one player and the attempts to repair that) and off-ice training.

The documentary gets even more interesting when the focus shifts to split-squad exhibition games and to just how the coaches plan to evaluate players there, though, and the behind-the-scenes look at the post-game grading from the coaching staff is really notable, and much different than what we’ve often seen in the various in-season all-access series. There, the rosters are already set; here, many spots are still up in the air. And Behind The Glass has done well to spotlight the tension there so far. Hopefully that will continue as the series rolls on.