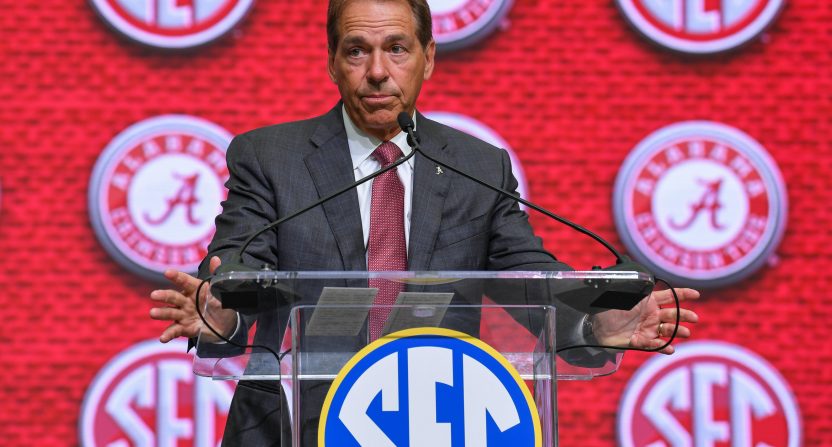 ESPN is the latest outlet to put together a behind the scenes/fly on the wall documentary series on a sports team. Their subject this time around is Nick Saban’s Alabama Crimson Tide, the reigning College Football Playoff Champions.

The series will premiere on ESPN2 on August 9th, and continues for three more episodes on Wednesdays following the debut.

ESPN will be embedded with Alabama’s program throughout August, and will have unprecedented access to Alabama’s players and coaches, including inside team meetings.

First-Hand Accounts: Head coach Nick Saban and a variety of personalities around the program will be mic’d up during practices throughout the month.
Behind Closed Doors: Inside team and coaches’ meetings, providing a glimpse of the program’s preparation beyond the practice field.
The Fight for Playing Time: Follow positional battles that emerge during training camp as players make their case for playing time, including at key positions.

In addition, there will be some focus placed on Alabama’s facilities, players off the field, and (gulp) the fans and media surrounding the program.

State-of-the-Art Facilities: An extraordinary tour of Alabama’s football facilities and the benefits they provide the players, including the new athletics dining area which is attached to the Mal Moore Athletic Facility.
Roll Tide: Diehard fans and local media provide their vantage point following and working around one of the sport’s all-time most successful programs.
Living Their Best Life: A look at the life of the Alabama football players beyond the practice field.

The series will be produced by JM Associates (producers of The Bassmasters) and Sport & Story (the company behind Being Bret Bielema and Being PJ Fleck) in association with ESPN.

This seems like a worthy endeavor, especially in the content wasteland that is August in the sports world. But ESPN’s efforts with Alabama won’t be unique – plenty of media companies have gone down the “behind the scenes” route, and even more are joining the fray. HBO is probably the best known in this area for Hard Knocks, but Showtime (All Access, A Season With, The Franchise), Amazon (All or Nothing), Fox (the Being series), and even Netflix (First Team: Juventus) have gotten in the fray.

It’s somewhat surprising that Nick Saban, of all coaches, would be willing to grant this kind of access to ESPN, but given Saban’s incredible success with the Crimson Tide, opponents are going to need all the help they can possibly get.

Training Days: Rolling with the Tide premieres on Thursday, August 9th at 7 PM ET on ESPN2.