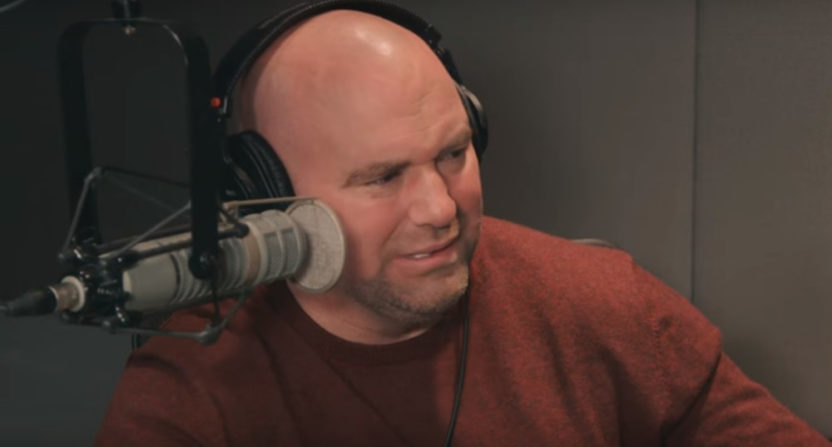 The UFC’s $4 billion sale to WME-IMG (now Endeavor) last year came in at a price roughly seven times earnings, and many have speculated that premium was at least partly about future broadcasting revenue projections. In addition to its pay-per-view events, the UFC has a broadcasting deal with Fox for $115 million per year, and with that deal soon to expire at the end of 2018, they’re anticipating a massive increase; a prospectus set to potential investors ahead of the sale mentioned possible broadcasting revenues of $450 million per year.

Now, in a recent interview with Jason Gay of The Wall Street Journal on the WSJ’s new Unnamed Podvideocast, UFC president Dana White has seemingly hinted at potentially signing a deal with an outside over-the-top streaming partner (in addition to the broadcast deal and the in-house UFC Fight Pass streaming service).

Here’s the full interview. The key part comes about 15:30, where Gay asks White about the crowded and changing media landscape, saying “How do you keep going and how do you keep growing in this kind of climate?” White responds with a long discussion of how “fighting works everywhere” (and “fighting is the first sport ever in the history of the world” and “fighting is in our DNA”), which then turns into comments on streaming around 16:40:

“Fighting works everywhere, all over this planet, and now with technology, we’re getting to the point that I always dreamed about,” White said. “I always used to say, we’ll take this thing all around the world, build a fan base, build up some talent in every country around the world, and then we’ll get to a point in time where everybody can watch it at the same time on the same platform. We’re getting to that day.” Gay interjected “On your own platform,” and White said “Right, on an OTT-type platform.”

Gay then asks if White anticipates the new contract will be on a traditional network, a streaming platform or both, saying “Could we see some sort of digital player entering the picture with you guys?” White responds “Absolutely. That stuff’s all about to change. When I grew up, we had channel 3, channel 5, channel 8, and channel 13, and then the channel ‘Sesame Street’ was on. Those are all the channels that we had. Now what’s crazy about television these days, I have DirecTV and I have cable, so I have 2,000 channels and nothing’s on. Nothing’s on. And I think that we have the type of content that people will watch. Every once in a while, not every fight that I put on is a mega-fight and a fight that spills over into the mainstream, but I’ll get those twice a year.”

Gay and White then talk about how kids watch more content on their phone and on Netflix, and Gay then asks about “legacy” (read: more traditional) leagues and if they need to be more radical. White responds by talking about not just leagues, but ESPN (19:00).

“I think where you really see it is if you look at ESPN and how powerful ESPN was five years ago, and if you look at what they were getting per sub, their subs are dropping. And they’re scrambling trying to figure it out right now. They’ve started that BAM Network, which is going to be an OTT (White is referring to ESPN parent Disney’s purchase of BAM Tech, and the planned ESPN OTT service using its technology that’s scheduled to launch in 2018). There’s no doubt that the internet and OTT is where it’s all going. And it will be interesting to see when it all, when the smoke clears, who’s around and who’s not.”

Gay then talks about every league “being an independent operator” with their own digital network, content and in-house production, and mentions that the UFC’s already done a lot of that, and White says “That’s one of the great advantages we have, we’ve always done all of this ourselves.” Gay says “Yeah, because people didn’t want to do that at first, right? You had to build up from there.” White says “Exactly. People used to come and they’d cut a deal with ABC, NBC, Fox or whatever, Fox would come in and they’d pay them a big chunk of money and they’d do all the production and do everything. We do everything ourselves. We have everything in-house.”

White is certainly correct that the UFC has a leg up on many leagues in terms of in-house production and digital content. But the decision to keep so much in-house and UFC-controlled has caused some problems too, from UFC Fight Pass outages (including during Mayweather-McGregor to banning reporters like Ariel Helwani from certain UFC and UFC-affiliated events, even broadcasts on outside networks). And current streaming technology often has problems with any sort of event where tons of people are trying to watch at once, including UFC fights. It’s also notable to hear White praise keeping the production in-house, as there have been reports that the UFC will give that up in a new contract (and they might have to do that to make the money they want; it depends on the network involved, as some are willing to take outside-produced events and others have more issues with that).

Beyond that, it’s interesting to hear White talk about a possible deal with an outside streaming service. That’s certainly where a lot of the money seems to be, as shown by what Amazon paid for non-exclusive Thursday Night Football streaming rights, but a lot of the streaming sports numbers so far have not been great. And streaming services do still often have lag and outages during high-demand sports events. But what may be even more notable is the question of what would go to an outside streaming service, and how that would interact with television, pay-per-view and the existing UFC Fight Pass service. White isn’t offering any specifics here, and it may be the specifics that really dictate how this will work, but he appears keen on bringing in an outside streaming party and moving further beyond traditional TV. We’ll see what that means for the UFC in the next round of contract talks.