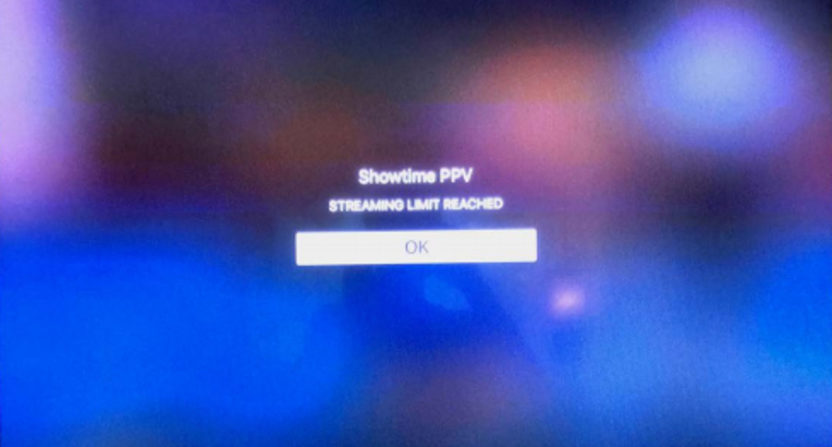 A day after a class-action lawsuit was filed against Showtime over complaints about its Mayweather-McGregor stream not living up to the advertised quality, the broadcaster has offered full refunds to some of those who bought the pay-per-view directly from them—but only if they bought directly from Showtime, and only if the company can determine that they couldn’t watch the fight. Thus, this wouldn’t appear to cover all the complaints from fans like Zack Bartel, who filed that lawsuit (an image from the lawsuit is shown above); his lawsuit stated there were error codes and buffer events, but that he was able to see some “grainy video,” so it’s about the quality of the stream, not just being totally unable to access it. Here’s more on the Showtime refund offer from Todd Spangler of Variety:

After technical glitches disrupted the Floyd Mayweather Jr.-Conor McGregor boxing match live-stream on Saturday, Showtime Networks says it will provide refunds to affected customers if it is able to determine they were unable to watch the pay-per-view event.

“We have received very limited number of complaints overall,” said Chris DeBlasio, senior VP of communications for Showtime Sports. “We are reviewing all of them carefully and will respond to them accordingly.”

Showtime will issue a $99.99 refund for customers who purchased the PPV access in HD through Showtime’s own direct-to-consumer services. If customers bought the PPV event through another distributor, such as UFC’s Fight Pass or through a cable or satellite TV operator, those consumers must request a refund directly from that provider.

Speaking of those other providers, that’s where many other issues are here. The UFC Fight Pass service in particular drew a lot of complaints ahead of the main event, and some Twitter users said UFC reps refused to provide refunds. In that Variety story, the UFC says they’re trying to figure out what went wrong, but they’re not promising refunds, only to evaluate each claim individually:

Asked for comment, UFC said it is reviewing each refund request “on a case-by-case basis. We are in direct contact with the consumers regarding a resolution.”

“We’re incredibly disappointed by the technical difficulties that were experienced Saturday night, and we’re working with our vendor NeuLion to assess exactly what happened,” UFC said in a statement.

So it’s possible that some customers there could get refunds as well, but the organization isn’t committing to much. And it seems likely that some customers with both Showtime and the UFC aren’t going to be totally satisfied with what they offer, so we may see more legal action to come. It’s also interesting that this happened to the UFC just a couple of years after HBO’s Silicon Valley had a plotline involving Dana White promoting a failed UFC stream:

Life imitates art. Maybe White and the UFC should have gone with Pied Piper instead of Hooli.