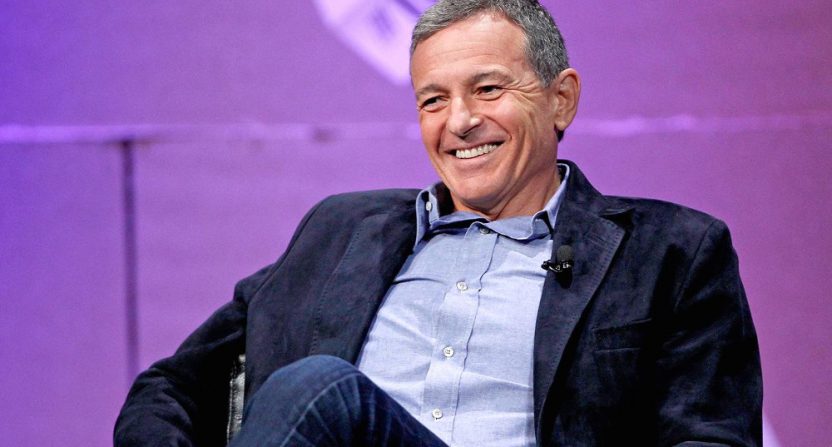 Ahead of ESPN parent Disney’s Q3 earnings call Tuesday, CEO Bob Iger went on CNBC’s Closing Bell and revealed several key pieces of information about the company’s plans, while ESPN also sent out a release about what’s next. Iger said Disney has a deal to pay $1.58 billion for an additional 42 per cent of BAMTech (Major League Baseball’s spun-off streaming technology arm, which Disney paid $1 billion for 33 per cent of last summer, with an option to buy more during the next four years), which will give them majority control, and they’ll be using BAMTech to launch the much-anticipated ESPN-branded over-the-top streaming service in “early 2018”. They’ll also be using it to launch a Disney-branded streaming service in 2019, and to that end, will be ending their films’ distribution deals with Netflix. On the call, Iger said taking majority control of BAMTech is a big part of their overall direct-to-consumer plans.

“We’re also announcing a major strategic shift in how we distribute our content,” he said. “It’s been clear to use for a a while that the future of this industry will be forged by direct relations between creators and consumers.”

Iger said it’s key for them to get in on this overall market shift, and ESPN will play a big role there.

“We’re accelerating our strategy to be at the forefront of this transformation,” he said. “We’re greatly expanding our plans for the first direct-to-consumer ESPN-branded service.”

Iger then went into details on that service, which will launch early next year and exist within the main ESPN app. He said that service has been discussed for a long while, but it’s going to be much bigger than they’d initially planned.

“It will be even more robust than the one we had anticipated.”

Iger said this app will provide access to up to 10,000 events not seen on ESPN’s TV platforms, including MLB and NHL content, and it will be accessible by those who already have a pay-TV subscription (similar to today’s ESPN3/WatchESPN offerings). And it will offer further additional subscriptions to things like MLB.tv. Here’s Iger talking about it on Closing Bell:

Here are more details from the ESPN release:

The new service will be accessed through an enhanced version of the current ESPN app. In addition to the multi-sport service, the ESPN app will include the news, highlights, and scores that fans enjoy today. Consumers who are pay TV subscribers will also be able to access the ESPN television networks in the same app on an authenticated basis. For many sports fans, this app will become the premier digital destination for all their sports content.

…Plans are for the Disney and ESPN streaming services to be available for purchase directly from Disney and ESPN, in app stores, and from authorized MVPDs.

This is about much more than just ESPN, of course, and that Disney streaming service and the removal of their films from Netflix (starting with the 2019 theatrical slate) is a huge deal.

Iger said later that discussions on what to do with Marvel and Star Wars properties will be announced at a later date; they could be integrated into the Disney service, launched as their own, or left with services like Netflix. At the moment, they’re mostly talking about Disney/Pixar films. He said “This doesn’t represent a change except on the Disney/Pixar side, and possibly on the outputs for Marvel/Star Wars films, which we’re still discussing.”

This is Disney and ESPN taking a big step into directly providing their content to consumers, and cutting out some of the middlemen. They’ll also be producing exclusive films and TV specifically for this service. It’s a big shift in the way the business works, and it will be interesting to watch and see how it plays out for them.