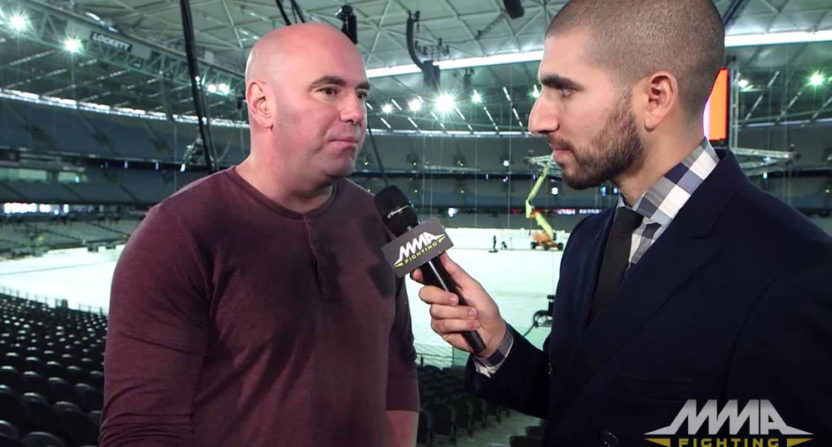 One of the weirdest parts of the lead-up to Saturday’s Floyd Mayweather-Conor McGregor fight involves how veteran MMA reporter Ariel Helwani (currently of Vox Media’s MMAFighting.com) was initially supposed to be a big part of Showtime’s press tour coverage, and was listed in their release, but was quickly removed right before the tour began. That carries some similarities to when he was fired by Fox last March, or he was kicked out of a UFC event and “banned for life” for doing his job last summer, and while that ban was eventually overturned, the UFC in general and UFC president Dana White in particular seem to still be out to crack down on him.

Helwani recently spoke to Awful Announcing on a variety of subjects, but had some particularly interesting things to say about his removal from the Showtime coverage. He also spoke about his overall relationship with the UFC and White; he said he got along well with White early in his career (he’s shown above interviewing White for a Nov. 2015 piece), but that relationship’s soured recently. He also talked about how he’s still been able to cover the lead-up to this fight (and has been in the middle of some other controversies around it, such as the ongoing drama with Showtime analyst Paulie Malignaggi, McGregor and Mayweather). First, Helwani said that White personally got him removed from the Showtime coverage.

“That, from what I was told, was Dana,” he said. “My agent talked to Showtime two and a half weeks before, they wanted me to be a part of it. So the first day in L.A., I was going to be a pundit if you will, and then in Toronto and New York, I was going to be the host. And it was all good, it was agreed, they sent out a press release, they laid it all out. I was very excited, I flew out to L.A., took the red-eye after my show on Monday, got there and it was great. Tuesday morning, the thing’s about to kick off I think at noon Pacific, and I was asked to go see Stephen Espinoza, who’s the head of Showtime Sports, at 10. I knew right away that something was up.”

“I got there and I saw him. He had a look on his face, and I knew that something was up, and he said essentially Dana was not happy with the idea of me being a part of this, and a big stink was made, and he put his foot down and said I’m the only guy that can’t be a part of it. He would not be in favor of this. And I think the reason was it was also airing on UFC.com, and I didn’t know this, and to be honest, when I heard about it, I wasn’t very happy about it, because I didn’t want any confusion about what my role was or who I was working for.”

“Obviously, I was very, very disappointed. And I made the decision to make that public because to me, I feel like he’s trying to make it personal now. Now you’re taking away my jobs, my money, my opportunities. And this could have led to possibly more with them for this fight. And I just couldn’t believe that he would go to those lengths.”

“But again, like with what happened last year, I tend to view these things with motivation. And personally, I think our coverage has been the best of any outlet. …I’ve been to every stop on the world tour except for London. …I’ve had every character involved in this on my show. …So I definitely was upset, but I’m not one to lick my wounds. And I hope that we can clear this up; I wish that he [White] wouldn’t do these sorts of things, but you know, it happened. And from what I understand, it was just his decision. And obviously, he’s a powerful guy in the organization, so they’re going to listen to him.”

That’s certainly not ideal when a league executive like White has such a personal role in kicking a reporter off a media broadcast. And it’s happened before with Helwani; he said that White got him fired from Fox’s UFC coverage last year. At the time, Helwani only said that he was fired, and “there’s a lot of smart people on the Internet. There’s a lot of smart people out there. You can probably guess what happened. I don’t need to go into that. I want to have a career, I want to cover this sport. There’s no need. You can guess it. Read the stuff that’s out there. I don’t know how people are so smart, but you’re spot on.” Now, he told AA White and the UFC executives were behind that.

“In March of last year, the UFC essentially told Fox that they wanted to let me go. I’d been with Fox for five and a half years, and I got a two-minute phone call, and they said it’s because the UFC had asked them to relieve me of all my duties. Obviously, that was very disappointing and very upsetting, because I didn’t do anything wrong. i didn’t breach any contracts. And the first meeting I had with George Greenberg (executive vice president of content integration and presentation for Fox Sports) at Fox, he sat down and told me ‘We believe in journalism, we’re going to cover the UFC, and just because we’re in business with them now doesn’t mean that just putting out fluff things.’ And I never defied them, I never did anything they didn’t ask me to do. There were times where they asked me not to report things and I sat on things, as much as that bothered me. And then of course, the UFC got particularly upset, and they said ‘It’s time to let him go.'”

Helwani said leaving Fox to focus on his MMAFighting.com work actually worked out well for him, though, as he could report more freely without worrying about rightsholder responsibilities.

“After that, the shackles were off and I could do what I wanted,” he said. “By then, I had kind of built up an extensive Rolodex, so I just started breaking everything. Things I had gotten in the past, I’d been sitting on for Fox. And the UFC was getting upset, and was convinced I had a mole at Fox. And this was not true, there was no mole. They thought that they were telling things to Fox and I was beating them to it because I was trying to get back at them, and I was just going, of course I wanted to show them they made a mistake, and I was motivated, because they took money from my family, but I was just going back to doing my job in the best way possible.”

That led to controversy with him kicked out of the event and banned last summer, but Helwani said things with the UFC overall have improved since then.

“Since then, my relationship with the UFC, I actually think it’s quite good,” he said. “There’s a new PR team from the time that this happened. They’ve been great, for the most part. There are certain times where they kind of leave me out of things, and I get it, but they kind of go out of their way, I think, to be really kind. …For the most part, the media access is pretty good. The days of them kind of playing these games are going away, and I credit the new PR team for doing that and being a lot more professional than PR teams of the past.”

However, things with White haven’t thawed, as seen from this latest drama over the Showtime role.

“I don’t really have much of a relationship with Dana,” Helwani said. “I don’t think he has let it go, unfortunately. I don’t even know what his issue is. I think if you go up to him and say ‘What is the beef with Ariel? What’s bothering you about him, what don’t you like about him?’ I don’t even know if he has a valid reason. I think it’s just something that has built up. Perhaps I annoyed him, or he doesn’t like it. I’ve told the UFC I’m open to speaking with him or burying the hatchet. I don’t want to have enemies. But I’m still doing my job, and I’m still able to do it fine if he doesn’t want to talk to me again. That’s his prerogative; he doesn’t have to.”

“It is unfortunate that it turned out this way, because he was so good to me and accepting early on. I wish it didn’t happen this way, but I don’t have any regrets, because I don’t think I did anything wrong. My relationship with the entire company, it’s actually pretty good, but with him, I call it non-existent at this point. Maybe sometime down the line, we can have a chat and clear the air and go back to how it once was.”