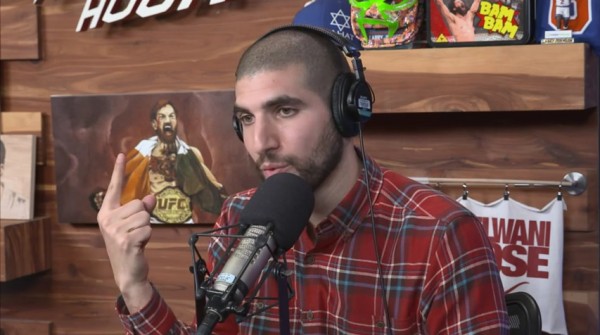 The dust is still settling from the UFC’s controversial banning of veteran MMA journalist Ariel Helwani and two colleagues late on Saturday night (or early Sunday morning) at UFC 199.

Helwani spoke to Yahoo’s Kevin Iole on Sunday, and said that Dana White called him “too negative”, which is loaded with irony if you’ve ever witnessed one of White’s childish Twitter rampages.

“I was brought to the back by UFC [public relations] and told by Dana White that I had to leave the arena,” said Helwani, who said it happened just prior to the main event. “Dana mentioned that from what I recalled that Brock Lesnar was upset the news was released early and that this could have ruined their deal.

The Yahoo piece by Iole also discusses the possibility of a mole within the UFC, which Helwani denied.

“I never go off one source anyway, so I guess they’re saying now there are two moles,” Helwani said. “But with God as my witness, there is no ‘mole.’ Honestly, I’m having a hard time wrapping my head around this. I’m almost embarrassed because people are saying, ‘You’re standing up for journalism.’

“I’m not doing any great investigative journalism here. This is not ground-breaking stuff. I’m not going to win a Pulitzer for this.”

The Helwani/White relationship is a complicated one. Helwani was a guest on Monday’s episode of the Jonah Keri Podcast, which was taped before the weekend’s event in Inglewood where all the shenanigans regarding his credentials. Much of the podcast was spent talking about Helwani’s history as a reporter in the MMA landscape, but he did have some words of praise for White for his openness over the year.

“If Dana White speaks talks to me again, and we’ve had our ups and downs, and I keep doing this for another 50 years, he will have talked to me and given me more of his time than anyone else in this sport combined.”

The UFC hasn’t had much of a response in public to this. After initially declining comment, UFC spokesman Dave Sholler pointed the finger at Helwani not coming to the UFC for confirmation f the Brock Lesnar story.

“I’m not saying you don’t have a job to report, but in this case [with Helwani], the professional standards are to reach out [to the UFC] for comment on a story you’re about to report, even if you get a no-comment,” Sholler said.

MMA Fighting and SB Nation fully support Ariel, Casey, Esther and the entire MMA Fighting staff. And we appreciate the support we have received from the MMA Fighting audience and community.

The UFC has not been in contact with us since revoking the credentials of Ariel, Esther and Casey. But we will keep you, our audience, informed of the situation.

On Monday’s edition of The Dan Patrick Show, Helwani made an appearance in the second hour and revealed that a UFC PR person told him that he jumped the gun on his story about Conor McGregor and Nate Diaz fighting at UFC 202 (a story which was later confirmed that night by the UFC).

After breaking the Lesnar story, Helwani then relayed the above story about White calling him negative while also adding in that UFC co-owner Lorenzo Fertitta “wasn’t a fan of mine” and made the call to ban him.

Helwani also quit beating around the push in regards to his departure from Fox, saying, “Fox dropped me because the UFC told it to. That’s a fact”.

Furthermore, Helwani alleged that UFC was looking for “advertising” rather than deeper digs into the news by the media and said that it was time for the mainstream media to learn about the frequency of credentials being pulled from media by the UFC.

Helwani will also address this situation on Monday’s edition of The MMA Hour, which we’ll cover in a separate post when the show goes live. But right now, going off one side of the story and the extreme radio silence from the other side, this is not a good look for the UFC at all.