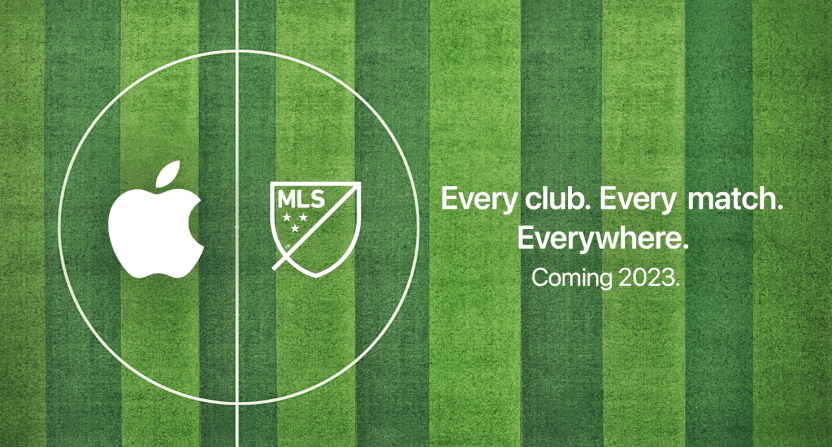 With the local, national, and international MLS rights all up after the 2022 season, there’s been lots of talk over the past few months about what might happen there. And there were some indications that the league might do something unusual in their next deal, with The Athletic’s Sam Stejskal reporting in March that CBS, Fox, and ESPN “have not shown much – if any – interest.” Well, MLS did in fact take an unprecedented leap, signing a 10-year global deal with Apple for all MLS matches (beginning in 2023). That deal, which Sports Business Journal’s Alex Silverman and John Ourand note comes with Apple guaranteeing MLS a minimum of $250 million annually, makes MLS the first major U.S. sports league to go to a fully-streaming (with some exceptions, which we’ll get to later) deal,  and it also marks Apple’s first deal for all of a major league’s content. Here’s more from the MLS release:

Apple and Major League Soccer today announced that the Apple TV app will be the exclusive destination to watch every single live MLS match beginning in 2023. This partnership is a historic first for a major professional sports league and will allow fans around the world to watch all MLS, Leagues Cup*, and select MLS NEXT Pro and MLS NEXT matches in one place — without any local broadcast blackouts or the need for a traditional pay TV bundle.

From early 2023 through 2032, fans can get every live MLS match by subscribing to a new MLS streaming service, available exclusively through the Apple TV app. In addition to all of the match content, the service will provide fans a new weekly live match whip-around show so they never miss an exciting goal or save, and also game replays, highlights, analysis, and other original programming. This live and on-demand MLS content will provide in-depth, behind-the-scenes views of the players and clubs that fans love. A broad selection of MLS and Leagues Cup matches, including some of the biggest matchups, will also be available at no additional cost to Apple TV+ subscribers, with a limited number of matches available for free. As an added benefit to fans, access to the new MLS streaming service will be included as part of MLS full-season ticket packages.

“Apple is the perfect partner to further accelerate the growth of MLS and deepen the connection between our clubs and their fans,” said MLS Commissioner Don Garber. “Given Apple’s ability to create a best-in-class user experience and to reach fans everywhere, it’ll be incredibly easy to enjoy MLS matches anywhere, whether you’re a super fan or casual viewer.”

“For the first time in the history of sports, fans will be able to access everything from a major professional sports league in one place,” said Eddy Cue, Apple’s senior vice president of Services. “It’s a dream come true for MLS fans, soccer fans, and anyone who loves sports. No fragmentation, no frustration — just the flexibility to sign up for one convenient service that gives you everything MLS, anywhere and anytime you want to watch. We can’t wait to make it easy for even more people to fall in love with MLS and root for their favorite club.”

So, the distribution here is worth some further discussion. While all of the matches will be in the Apple TV app (which is available not just on Apple devices, but also many third-party smart TVs, Roku devices, and other connected TV devices), they’ll be there at different levels of pricing. To watch every match, viewers will need a subscription to the new MLS subscription service, which will be offered separately from a regular Apple TV+ subscription. (This is similar to the old MLS Live out-of-market service, which was rolled into ESPN+ in 2018, but comes with the great advantage of no blackouts, making it an in-market service as well.) And the pricing for the full service is not yet revealed.

But those who already subscribe to Apple TV+ ($4.99 a month) will get access to some matches just from that. And some other matches will be available in the app without a paid subscription (similar to what Apple has done for their Friday night MLB package so far, their previous largest live sports deal). And, as per SBJ’s Silverman and Ourand, negotiations are still underway (including with ESPN and Fox) for some matches to be shown on linear TV as well as in the Apple TV app. That SBJ piece also has an interesting note on the revenue numbers:

MLS execs said that Apple is not paying a straight rights fee for the package of rights. Rather, Apple is paying a minimum guarantee that sources say is worth $250M per year starting in ‘23. MLS will start to bring in more revenue as Apple sell subscriptions for a newly launched MLS subscription offering. “What’s different here is traditionally media companies pay rights fees, and you sell ads,” said MLS Commissioner Don Garber. “This is a partnership. And that partnership’s core is a subscription business that we’re going to build together, and we’re going to get a guarantee against the revenues that will be achieved on the subscription business. Then, we go over those guarantees, we’ll have the opportunity to make more money, which is really unique in sports media.”

That’s definitely an unusual deal. One previous one with a guarantee similarity was ESPN’s guarantee of $295 million over 20 years to the University of Texas for the (soon-to-end) Longhorn Network, which ensured that the Longhorns got their money regardless of how well Longhorn Network wound up doing for ESPN (note: not that well). However, that was reportedly a guarantee rather than a profit-sharing agreement (which didn’t matter in the end thanks to LHN losing money). This one comes with not just a guaranteed floor, but also upside potential if there are a lot of subscriptions sold here.

Thus, there’s some appeal to that for MLS. Even the floor guarantee of $250 million annually is well above the estimated $90 million they were currently getting from ESPN, Fox, and Univision for U.S. national rights, and it’s also above the estimates of $150 million to $200 million many projected in March. Yes, that comes with a decrease in linear TV access, but that’s part of why the numbers are good: streaming services often have to pay a premium to gain previously-linear rights. The other big reasons the numbers are higher is the inclusion of local and global rights, not included in the ESPN/Fox/Univision packages, but MLS wasn’t doing all that great with those overall. Now, they have one media partner for everything, and a media partner that has a significant global reach and may be able to make them a bigger deal elsewhere.

And there’s an argument that MLS is better-suited than many leagues to jump to all-streaming. Its audience has been repeatedly reported as younger than many sports (for example, Sports Business Journal pegged MLS viewers’ average age as 40, the youngest of any North American league, in a 2017 story). That suggests the MLS audience is more likely to be familiar with streaming and have connected TVs, and less likely to have traditional cable or satellite packages. (And the group of people without any multichannel video provider, be that cable, satellite, or virtual, is who could really benefit from this. Most sports’ half-jump into streaming has urged viewers to keep MVPD subscriptions while also buying over-the-top services. For those who only care about MLS in the live sports realm, a MVPD will no longer be necessary.) It’s also notable that MLS has previously taken some steps into the streaming waters with some local deals with YouTube TV and fuboTV, so they and their fans have some idea of how this approach works.

There’s also some logic to why this might work out for Apple. For one thing, it’s notable that this gives them global and local rights in addition to the usual national rights. MLS national TV numbers have often been not great, but the ability to get both local and national fans for the same broadcasts may help, as may the ability to show these matches around the world. And the indications here are that they’re going to produce several different language broadcasts, with English and Spanish feeds available for all U.S.-based MLS teams, and English and French feeds available for all Canada-based MLS teams.

This may be a loss for those who enjoyed local RSN/streaming coverage of their MLS team, though. As per Ryan Clarke of The Oregonian, MLS president and deputy commissioner Gary Stevenson confirmed that that’s ending. However, Stevenson added that clubs can create their own pre-game and post-game content if they want, and that there will be local radio broadcasts, and that the Apple app will include the ability to use audio from local radio):

Stevenson: "What we anticipate is we will have a pregame show, halftime show, and postgame show for every one of our matches."

One national broadcast per match.

"Each club will have the ability to create local content shows within their market" like pregame shows, etc.

MLS adds that fans will have the opportunity to switch the audio for their streaming broadcast from Apple’s announcers to whoever is the local radio announcer.

It’s also notable that, as Soccer America’s Paul Kennedy relayed, this corresponds with MLS moving to more consistent matchdays on Wednesdays and Saturdays:

New MLS schedule: All games (except perhaps linear and stadium conflicts) will be on Wednesday & Saturday nights.

We’ll see how this deal works out for MLS and Apple. But it’s certainly going to be a big shift.