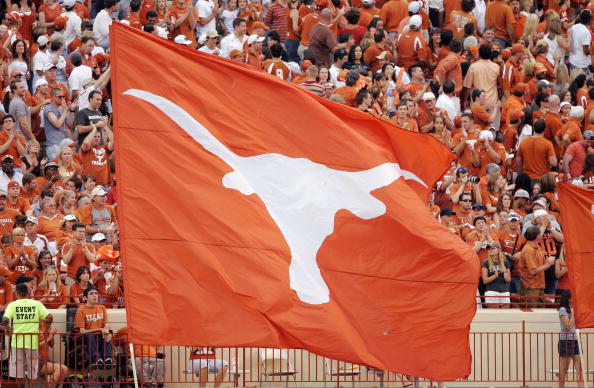 This week, ESPN announced the official creation of the ACC Network, coming to a cable or satellite system near you in 2019.  It will bring the ACC into the fold as the fourth power five conference to launch their own network, joining the Big Ten, SEC, and Pac-12.  Having their own network not only secures the future of the ACC, it opens up a significant stream of revenue.

The creation of the ACC Network also leaves the Big 12 as the only power five conference without its own television network.  Instead of moving towards a Big 12 Network, ESPN entered into a relationship with the University of Texas in creating the Longhorn Network, a 24/7 channel dedicated to Texas athletics.

ESPN paid Texas $295 million in a 20-year contract but the network reportedly lost $48 million in its first five years of operation and it’s been a long, slow process getting it widespread distribution. And for all the fear of extra LHN cash making Texas a juggernaut, the Longhorns have dipped into mediocrity in both football and men’s basketball.

Oklahoma State head coach Mike Gundy has called for its elimination.  Others see it as the biggest thorn in the side of a potential Big 12 Network forming.  Now with Big 12 expansion back on the table and the conference looking to secure its future once again, the conversation has turned back to what to do with Longhorn Network.

With all of the controversy surrounding ESPN and Longhorn Network over the years and its impact on a potential Big 12 Network, was LHN a misstep by ESPN and where do they and the Big 12 go from here?  A few of our writers from Awful Announcing and The Comeback weighed in:

Allen Kenney: No, it was not a misstep for ESPN at all. Giving Texas its own cable network killed the prospects of a Pac-16 in 2010, which would have posed a significant threat to ESPN’s dominance of the college sports television market on the west coast. Even if the Longhorn Network never returns a dime to the Worldwide Leader, it enabled ESPN to retain a significant share of market power that is worth more in the long term than its investment in the LHN.

From here, the Big 12 can likely put together an over-the-top product that doesn’t require the scale and saturation of a linear channel to be successful. Frankly, though, I think the conference–at least with Texas and Oklahoma as members–might be living on borrowed time.

Jay Rigdon: Was it a mistake for ESPN to launch the Longhorn Network? That’s a difficult question. Let’s take a look at the schedule for Thursday, July 21st.

From midnight on, we have LBJ Presents: Vietnam Summit, which sounds fascinating, though not exactly sports related. Then the 2005 Texas/OSU thriller, followed by Texas’s 2006 BCS Championship win over USC. Then six hours of Big 12 media days coverage. Then a four-hour documentary on the 2009 Texas football season. (I’m sure the 13-12 win over Nebraska in the Big 12 title game will be remembered in all its glory.)

At 4 PM, we have The Forty: 2015/2016 Greatest Plays, followed by Wide Open: Hook, Line, and Studdard, which is apparently an outdoors show featuring former Texas and Houston Texans lineman Kasey Studdard. That’s followed by LHN Stories VI and LHN Stories VII. Then we have that 2005 OSU game again, and then the 2006 USC game again. Then The Forty again. And then volume two of Hook, Line, and Studdard.

Yes, it was a mistake for ESPN to launch the Longhorn Network.

As to where they go next, I’d assume a potential Big 12 expansion gives the conference more leverage to create their own network, without fear of Texas bolting for greener pastures, but the LHN’s existence complicates things to such a degree that negotiations for that will be difficult.

Ian Casselberry: The Longhorn Network probably seemed like a good idea for ESPN back in 2011. Texas was one year removed from a 13-win season and BCS title game in football and the men’s basketball team was coming off a 28-win season. Not to mention all of the other success the school had in its extremely successful athletic program.

But for the Longhorn Network to be a worthy venture, Texas had to maintain a high level of success in those showcase sports. Once upon a time, that would have been possible. With reduced scholarships, freshmen looking for the best opportunity to play, and widespread TV exposure for a variety of schools, the days of one program or institution being an unconquerable force for decades are virtually over. Investing so many resources into one school — and setting it apart from the rest of its conference, which could be equally, if not more successful, depending on the year — is a risky venture. ESPN has now realized that the hard way.

The question now is whether or not ESPN can salvage the Longhorn Network by repurposing it into a network for the Big 12 conference. That, along with gaining more potential content by spreading the burden out among several schools, may be the only way for ESPN to get a proper return on its investment and help the Big 12 prosper by attracting new members with the promise of wider TV exposure and the huge cash benefits derived from a conference network. Or does ESPN try to cut its losses, especially after announcing plans for the ACC Network, and let a rival like Fox Sports try to clean up this mess? Given ESPN’s current financial state, it might be best to move on.

Ben Koo: LHN was certainly a misstep for everyone not named the University of Texas. I think the majority of fans at all of the Big 12 schools that left (maybe minus Colorado) will tell you they miss being in the Big 12 and that the launch of the LHN was a major factor in their departure.  Without a network and with Texas having all the leverage, the Big 12 is a grenade with the pin pulled out that has been close to unraveling multiple times already.

For ESPN, they bled money on this the first few years to the point where I’m not sure if or when they’ll get out of the hole. I’m sure at this point in time they don’t want the added overhead, oversight, and future carriage negotiations tied to the LHN. Yes they gained having LHN, but they also drove Nebraska and Colorado to conferences who have conference channels that ESPN doesn’t have a piece of as well. Meanwhile Texas has been largely irrelevant since the launch of the network in both football and basketball and ESPN lost a great rivalry game that moved the needle on Thanksgiving when A&M left the conference. Certainly this was a major misstep for ESPN.

How do you salvage the situation? Everyone talks about the LHN pivoting to become a Big 12 Network but Texas has all the leverage there. Who would have thought branding an entire cable channel and massive annual payout could lead to such a untenable situation? Pretty much everyone outside of Bristol and Austin.

Kevin McGuire: I recall at the time the Longhorn Network was launched believing it was a great strategy for Texas, and ESPN. With the benefit of hindsight, however, it is easy to suggest there was a lack of foresight for the evolving landscape of college sports and media rights, but who deserves the blame? I struggle to suggest ESPN was at fault, as they are clearly in the market to make money and believed they would do just that with the LHN.

I certainly won’t blame Texas, because even though there have been some hurdles to clear, this was a bold and innovative way to expand the reach of the university. Without a strong hold on Big 12 media rights, ESPN and Texas tried something new not knowing it would soon lead to teams leaving the Big 12. In the end, ESPN later goes on to learn from their LHN experience and launches a massively successful SEC Network.

The LHN may not have worked out quite as planned by those in charge of putting it together, but I am not sold this is an impassable road block on the way to a Big 12 Network, especially if ESPN is involved as they are with the SEC Network and upcoming ACC Network. The Big 12 may be lagging behind the competition in this game, but they will not stay there for too much longer. For the Big 12, the hope is that it is better to arrive late to the conference network game than never at all. How soon that happens remains a mystery, because getting the Big 12 to agree on any one thing is a difficult task that takes a significant amount of time. But if more money is the end game, I believe they will find a path everyone can travel to get there.

Matt Yoder: It’s a complex situation to try to process because there are so many different layers to it.  When it was first launched, LHN was a way to placate Texas and give them an extraordinary amount of power in the Big 12… but LHN also kept them in the Big 12.  You’ll have to remember that at the time only the Big 10 Network predated the launch of LHN.  The rise of conference networks has happened rapidly all around the collegiate landscape.

At the end of the day, the first goal for all of these colleges, conferences, and television networks is to make money.  Longhorn Network has not been a success from that standpoint for ESPN as stated above.  If ESPN could pull the plug tomorrow on LHN and start plans for a Big 12 Network, I’m sure they would.  To that point, LHN certainly isn’t helping any of Texas’ brethren in the Big 12.  The only entity to come out a winner in this is Texas.

Therein lies the rub.  The Big 12 has been teetering on the edge of extinction for years now so the current climate is nothing new.  The conference needs a network to be on a more level playing field with the other power five conferences, but I can’t see Texas giving up LHN and letting ESPN turn it into a Big 12 Network without some major, major concessions being made.  (Like fulfilling the rest of that $285 million contract with Bristol.)  Similarly, it’s hard to imagine Texas bolting the Big 12 and making needed concessions with other conferences who have launched networks and giving up LHN to join in with say the Big 10 or SEC.