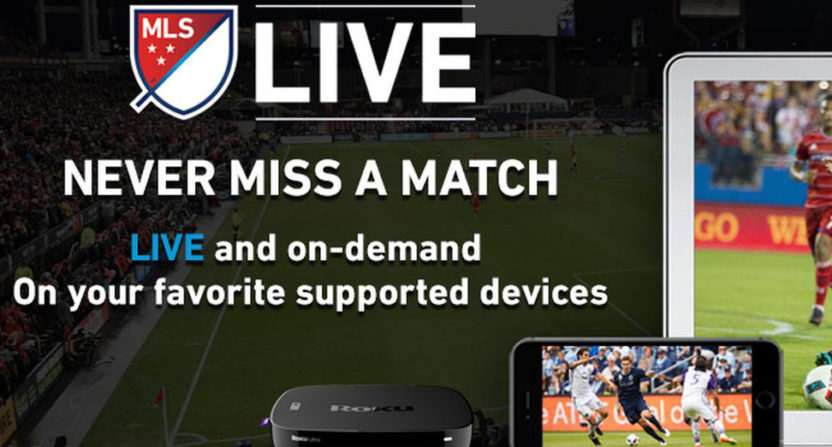 The upcoming ESPN Plus over-the-top streaming service just made a major content acquisition. That would be the exclusive out-of-market rights to Major League Soccer games, which were previously available through the league’s own MLS Live service. Now, as Bloomberg’s Scott Soshnick and Christopher Palmeri write, it appears that MLS is shutting down that in-house service and transferring those games to ESPN Plus, and MLS fans will actually be able to access that content (plus everything else on the new service) at a cheaper price:

Major League Soccer is shutting down its MLS Live streaming product and shifting those games to ESPN+, the new streaming service Walt Disney Co. plans to launch in the next few months, according to people familiar with the plan.

The teams have been notified, according to the people, who asked not to be identified because the change hasn’t been publicly announced. Fans will be able to watch about 250 out-of-market games a year, meaning they won’t be able to see their home teams. The accord doesn’t impact ESPN’s regularly scheduled televised soccer matches, which won’t be on the web service.

Still the change will be a bargain for soccer fans. The MLS Live service was priced at $79 a year, while the new ESPN streaming product will be $5 a month, or $60 annually. In addition to the soccer games, ESPN+ subscribers will get access to thousands of other live events a year, including pro baseball, hockey and tennis, as well as college sports.

That’s a major get for ESPN, especially given the $4.99/month price point of their service. We knew the service would have some MLS games, but it offering the entire out-of-market package previously sold by the league is a big deal. Some criticisms of ESPN Plus have been “Why wouldn’t you just pay for the league options and get all the out-of-market games?”, ignoring that not everyone needs or wants every game from a league and that some league packages (MLB and MLS in particular) alone are more expensive than the ESPN Plus price. But in the case of MLS, fans can now access all the games they would have through the league product, plus the rest of ESPN Plus’ offerings, for less than they would have paid for MLS Live.

And that might be an excellent entry point to get former MLS Live subscribers to shift to the new service. It could also entice those who never bought MLS Live but have interest in the league; maybe some of them will sign up, given the lower price point and extra sports content available this way. That’s a move that could potentially boost MLS’s own exposure substantially, too, as ESPN Plus will likely have a large user base of fans from other sports, some of whom might decide to check out MLS for the first time this way:

Let me say this as objectively as I can:

Folding MLS Live into ESPN Plus is one of the biggest media rights moves MLS has ever made. Making games available to what should be a big audience for that platform will immediately increase MLS’ exposure to casual fans in a huge way.

Now, it should be noted that ESPN Plus’ debut is just “later this spring,” likely after the MLS season starts on March 3. However, that actually could work out well for everyone. One source told Soshnick and Palmeri matches will be available for free on MLSsoccer.com until the new service launches. And that could be another free taste that might get more people to sign up for ESPN Plus when it does launch.

ESPN is looking to build a wide user base with this new service, both from those who already have cable, satellite or streaming multichannel packages that include ESPN and want the extra Plus content as well as from the cord-cutters or cord-nevers who don’t have traditional packages and still want to experience live sports. That’s why ESPN’s launching the Plus service at a low price point, trying to get large numbers of users. But this move indicates they’re still going to be offering significant amounts of content on the new service, and it’s particularly interesting that they’re essentially replacing MLS Live here instead of just picking up some MLS games.

Of course, this isn’t a complete one-stop shop; it doesn’t cover in-market games, and it doesn’t cover nationally broadcast games, so fans will still need other options if they want that content. But that’s no different than MLS Live; this is an out-of-market option replacing that, and doing so at a cheaper price while offering more content. It’s a bold move, and we’ll see how it turns out for ESPN. At the very least, though, this certainly looks like a good deal for soccer fans who had previously subscribed to MLS Live.