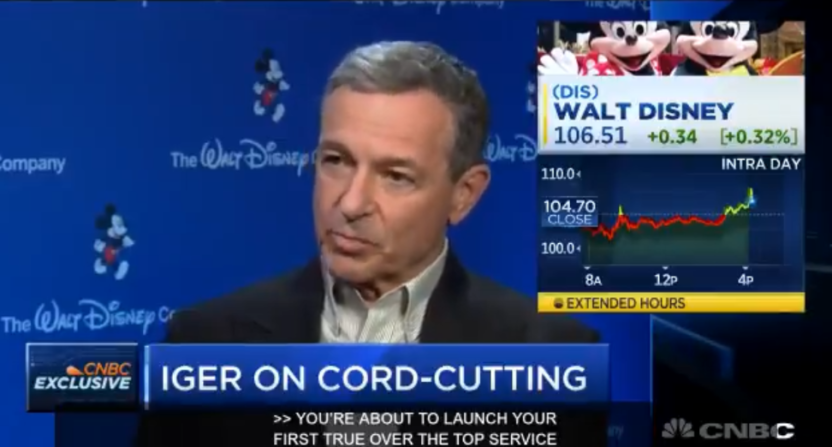 At Disney’s last quarterly earnings call in November, CEO Bob Iger was “bullish” on ESPN despite ongoing subscriber losses, citing a slower rate of losses and the plans for the upcoming new ESPN app and its associated ESPN Plus over-the-top digital streaming service. On Tuesday, around the release of Disney’s Q1 2018 financial results, Iger again focused on that app and its upcoming launch “sometime in the spring” and revealed in an interview with CNBC that it will be priced at $4.99/month, lower than the price of many other video streaming services:

Disney CEO Bob Iger says a new ESPN app will launch in the spring and "ESPN Plus" streaming service will cost $4.99. pic.twitter.com/nIMzPh9H5n

In that interview, Iger talks about how the app will be “basically redesigned,” and mentions its three primary components: scores, news and highlights (for anyone), access to streams of ESPN’s cable networks (for those with an authenticated cable subscription), and the new ESPN Plus service. He expanded on those remarks on Disney’s earnings conference call later Tuesday afternoon. But before we get there, it’s worth breaking down those earnings (the Disney release is here), which saw the overall company’s earnings per share go up 88 per cent year over year (to $2.91 from $1.55), or 22 per cent (to $1.89) if you exclude the $1.6 billion one-time net savings they got from the new federal tax act.

Disney’s revenues went up 4 percent overall, and its net income went up 78 percent, while its media networks segment saw flat revenues and a 12 percent decrease in net income. Breaking down the media networks segment further, cable networks (which includes ESPN) revenue went up 1 percent, but broadcasting revenues fell 3 percent. When it comes to segment operating income, cable networks fell one per cent and broadcasting fell 25 per cent. So, for once (a significant divergence from the trend on these calls), the bottom-line impact wasn’t really all that much about ESPN. Now, it should be noted that the cable networks segment is bigger ($4.3 billion versus $1.75 billion in Q1 2018 revenue, $858 millon versus $285 million in segment operating income), but the change was still much less bad at cable networks than the broadcasting segment. Here’s what their release said about broadcast networks:

Broadcasting revenues for the quarter decreased 3% to $1.8 billion and operating income decreased 25% to $285 million. The decrease in operating income was due to lower advertising revenue, higher production cost write-downs and a decline in program sales income. These decreases were partially offset by affiliate revenue growth due to rate increases.

Advertising revenues reflected fewer network impressions and lower political advertising at our owned television stations, partially offset by higher network rates. The decline in network impressions was due to a decrease in average viewership, partially offset by an increase in units delivered. Thedecrease in program sales income was due to a higher cost mix of programs sold in the current quarter compared to the prior-year quarter.

And, as per the cable networks:

Cable Networks revenues for the quarter increased 1% to $4.5 billion and operating income decreased 1% to $0.9 billion. Lower operating income was due to a loss at BAMTech and a decline at ESPN, partially offset by growth at the Disney Channels and Freeform. In the current quarter, BAMTech’s operating loss is reported in Cable Networks as a result of our acquisition of a controlling interest in the fourth quarter of fiscal 2017. The Company’s share of BAMTech results was previously reported in equity in the income of investees.

The loss at BAMTech reflects ongoing investments in their technology platform. The decrease at ESPN was due to lower advertising revenue, partially offset by affiliate revenue growth and lower programming costs. Lower advertising revenue was due to a decrease in impressions and lower rates. The decrease in impressions reflected lower average viewership and fewer units delivered.

Rates and average viewership were negatively impacted by the shift in timing of College Football Playoff (CFP) games. The current quarter included three “host” bowl games, whereas the prior year quarter included one host game and two semi-final games. Semi-final games generally generate more advertising revenue than host games. Affiliate revenue growth was due to contractual rate increases, partially offset by a decline in subscribers. Programming costs decreased due to the shift of the CFP games, partially offset by contractual rate increases for college sports and NFL programming. Semi-final games generally have a higher cost than host games.

So, it sounds like things are going somewhat decently for ESPN, at least by comparison to some other areas of media networks. And ESPN has made progress relative to its own recent performance, too. In response to a question on the earnings call later, Iger said ESPN did lose some subscribers again this quarter (about 3 percent), but that trend slowed for the second-straight quarter which he attributed to the increase in subscriptions through digital multichannel video programming distributors (MVPDs) like YouTube TV and SlingTV, some of which come from “cord-nevers” who never signed up for traditional cable.

“We’re seeing people coming into the digital MVPDs who were previously considered cord-nevers,” Iger said. “We believe the trends in the digital platforms will continue, and hopefully that growth will continue to offset the losses on the traditional side.”

“We did see a modest sequential improvement in Q1, the second consecutive quarter we’ve seen that, and the growth is being driven by the digital MVPD platforms.”

McCarthy did say Disney saw some slower ad sales at ESPN in Q1, though, and some of that may continue into Q2 (although sales there are currently comparable to Q2 last year), with the Winter Olympics on NBC’s networks meaning there’s suddenly much more non-ESPN sports programming inventory out there.

“The Winter Olympics mean an increase in sports content,” McCarthy said. “That’s one of the factors having an impact on our ad sales in Q2.”

As per the ESPN app, Iger said that this won’t just be a facelift, but rather a dramatic overhaul.

“The technological guts behind the entire ESPN online and app experience is being completely redone. The app we’re launching later this spring will be a completely new app.”

On the scores, highlights and news, the new app will have multiple levels of personalization, with subscribers able to customize it the way they want for news or videos about particular teams, but the app will also have its own machine-learning algorithm to present subscribers with more content similar to other things they’ve liked (along the lines of what we see from services like Netflix).

“The machine learning elements of it will allow the app to basically determine what someone is interested in and feed them more of that as they use the app more,” Iger said.

The app will also let those who authenticate through a subscription to ESPN’s cable networks (which can be through traditional cable or satellite, or through a digital MVPD) watch those networks on the go, and then it will have further live sports and other programming (including the entire 30 for 30 series) available for those who pay for the ESPN Plus service (which can be bought on its own or in addition to a cable or digital MVPD package). Iger said there’s going to be a lot of app-exclusive content, too, and he’s excited about what this app means for ESPN’s future.

“We will continue to invest in original and exclusive content just for the app,” he said. “It will allow people to access ESPN just about any way imaginable. If anything points to the future of ESPN, it will be this app.”

Beyond that, Iger spoke about the meetings he’s been having with a variety of Fox leaders in the wake of Disney’s plan to purchase Fox’s non-news, non-sports assets. He said those assets, including regional sports networks, will add to Disney’s rights, production capabilities, and geographical diversity.

And that acquisition further ties into the planned Disney and Marvel direct-to-consumer services set to launch later this year, and should give them even more ability to create programming just for direct-to-consumer platforms. That will happen with movies, too; Disney’s movies are currently on Netflix, and their movies released throughout this year will be available on Netflix (but also on the new Disney streaming services in many cases), but starting with next year’s movies, the streaming will move to the Disney services. So that should get even more consumers buying direct from Disney. ESPN Plus is going to be the first one of these streaming services out the door, but it’s one rung in a larger picture, and Iger said the Fox acquisition (which includes Fox’s TV studios, FX’s TV studios and more) will help them boost direct-to-consumer programming even further.

“It’s ultimately our intention with this acquisition to create and to grow a global direct-to-consumer business.”