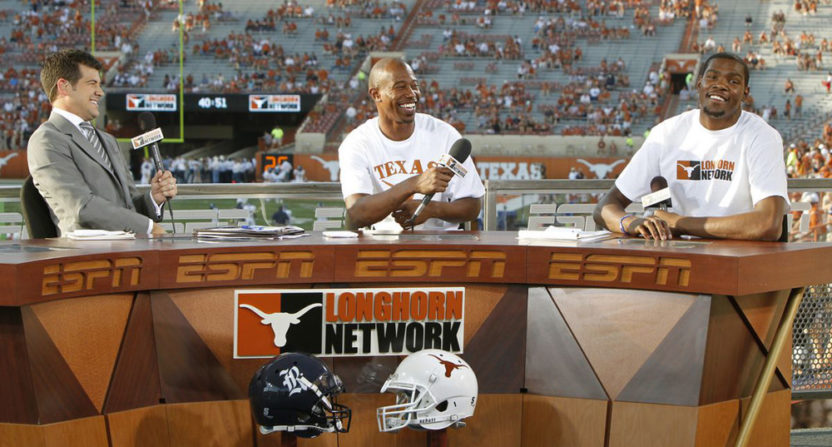 One of the biggest factors in recent college conference realignment was the August 26, 2011 launch of Texas’ Longhorn Network, which had many worrying that the Longhorns were about to blow by their Big 12 competition. Texas’ decision to team up with ESPN for a school-specific network was seen as a large factor in the huge wave of 2011 realignment, including Nebraska, Colorado, Texas A&M and Missouri leaving the Big 12 for the Big Ten, Pac-12, and SEC (the latter two) respectively, and it even stoked talk of 16-team superconferences.

However, six years later, the Longhorn Network really doesn’t seem to have given Texas much of an advantage over their Big 12 foes. As Mac Engel writes in a blog post for The Fort Worth Star-Telegram, it hasn’t led to on-field success for the school:

The Texas Football Panic of 2011 turned out to be a giant waste of teenage angst.

All of the worry and frustration directed at ESPN, then-Texas athletic director DeLoss Dodds and all of UT was warranted, but the impact of the Longhorn Network on the Big 12 standings has been nonexistent.

…The creation of LHN derailed a conference, acted as another drag on a cable network, gave UT even more money than it already had and, in the end, failed to create the imbalance as feared. Likely because no one is watching it.

Granted, a 20-year, $295 million guaranteed contract is hard to pass, even if it means the effective dissolution of your league. How UT has managed to blow the advantage as the only Division I university with its own 24-hour TV channel dedicated to its own athletic department is one of the most impressive feats in college athletics.
They blew it because no one is watching it. They blew it because the content is too niche and not compelling enough. They blew it because you can show Vince Young running into the end zone of the Rose Bowl against USC only so many times.

Engel makes many other good points in there, including how Texas football has fallen off, how their recruiting hasn’t received the promised bump, how the basketball and baseball teams haven’t done anything notable recently, and how even Texas’ non-revenue sports are struggling, negating the benefits of the added exposure they were supposed to receive.

Of course, none of that was necessarily known at the time the Longhorn Network was created, and 2011 was a different time for ESPN, a time of regular expansion rather than a time of cost-cutting amidst declining subscribers. But there were big questions about if a single-school network would be compelling enough to draw viewers even at the time, and the answer to those appears to have been mostly “No.” That doesn’t mean that rivals were wrong to leave over it, as the Longhorn Network’s creation made it harder to do a conference network, and those rivals are now reaping the benefits of conference networks elsewhere. But LHN certainly didn’t become the behemoth some feared, and it doesn’t seem to have helped Texas much.

So, Longhorn Network hasn’t turned into the recruiting or promotional boon Texas hoped for, but it’s still providing them plenty of money. However, there are questions about how long that will work for ESPN, especially if it’s not getting many viewers. Granted, they’ll still get per-subscriber revenue from those who pay for it monthly regardless of how many watch, but low ratings mean they won’t make much ad revenue. And the poor game inventory (Longhorn Network gets two football games this year, against San Jose State and Kansas) isn’t going to help with those ratings.

It’s interesting how even the network discussion has changed since 2011. Back then, following the initial success of the Big Ten Network (launched in 2007), every conference was eager to start its own network, and the Pac-12 Networks (launched in 2012) and SEC Network (launched in 2014) have shown some promise (especially the latter). With conference networks set to pop up everywhere, a school-specific network didn’t seem as ludicrous as it does now, especially for a school with Texas’ size and profile. However, in 2017, even conference networks carry questions; the SEC Network is doing well, but the Pac-12 Networks still aren’t on DirecTV, and the ACC Network isn’t set to launch linearly until 2019 (and may only be doing so because of contractual penalties if ESPN didn’t launch it).

That makes the idea of a single-school network even a tougher sell. And while Texas isn’t alone there, as BYU and Iowa State also have school-specific networks, those other schools’ networks are rather different. BYUtv is a wider play for the Mormon church, with sports only as a partial focus, and Iowa State’s network is only carried on the web and on Mediacom. So the Longhorn Network still stands alone in the case of people trying to make a nationally-distributed network for a single school. And while it’s still chugging along for now, and still bringing Texas plenty of money each year, it definitely hasn’t fully lived up to the Longhorns’ dreams or their rivals’ fears.