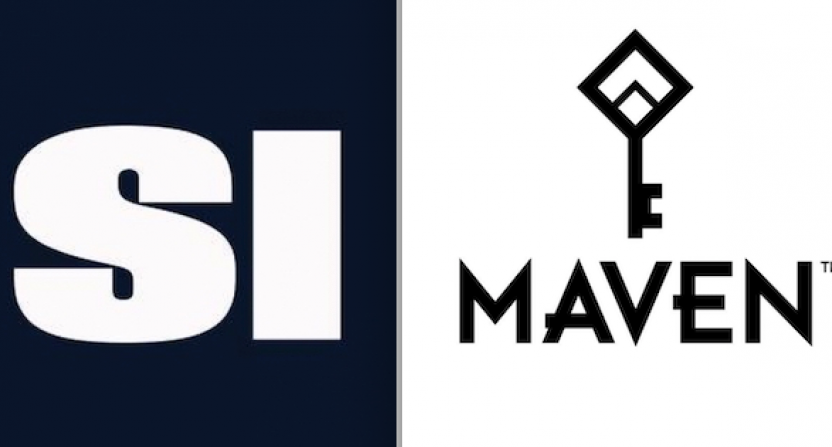 There have been lots of layoffs at sports media outlets this year, with diminished revenues thanks to the COVID-19 pandemic playing a large role there, so Sports Illustrated operator TheMaven’s decision to lay off at least five Sports Illustrated/Maven team site publishers (if there are more, please tell us) this week wasn’t unprecedented. It was interesting, though, especially as Maven had already announced cuts of nine percent of their overall staff (and six percent of SI staff) in March, announced further permanent salary reductions in April (and promptly fired those who took exception), and announced further salary reductions in June. And the way Maven handled these layoffs is particularly unprofessional and galling.

These layoffs come after a number of controversies around Maven. Those include a lawsuit from former SI owner Meredith over unpaid fees, and sudden background checks on publishers (after it emerged that Maven was employing a writer who had previously pled guilty to two counts of improper relations between an educator and a student), and Maven executives suggesting that team site publishers should create anonymous “burner” accounts to comment on their sites. And the layoffs themselves are notable because of the remarkably unconventional way Maven handled them.

To start with, Maven executive Mark Pattison (his LinkedIn profile lists him as “Senior vice president, business development, at Sports Illustrated, subsidiary of Maven,” and his email signature lists him as “senior vice president, partner development-Sports Illustrated”) let these publishers (who ran their own team channels, wrote for them, and also employed other writers) know they were laid off via a short, terse form e-mail with only slight personal modifications. Layoffs via form e-mail have occasionally happened, but it’s not a great look, and there are better ways to do it, from a more personal e-mail to a phone conversation.

But what was even more outside the box was how after those layoffs, and after those writers’ exceptionally-professional tweets noting their layoffs and thanking SI and Maven for the opportunity, Pattison texted at least two of those writer/publishers and asked them to remove the tweets. In one case, he just said “can you pull your tweet?” In another, he delivered a longer message, including “please take down the tweet that you put out.” Here are those texts.

(First, a clarification. Although we’ve blacked out the names here, Pattison obviously knows who he texted each of these messages to. And Maven has been notably hostile in several instances to people who have dared to speak out about what’s going on there, and AA has learned that Maven executives told publishers “If you’re going to leak to Awful Announcing or anyone else, get out now” in a Aug. 5 call. So it’s worth noting to any Maven executives reading this that while we have confirmed these texts are authentic, we did not receive them from the people they were sent to. So any attempts to punish those already laid-off individuals further are undeserved. And if they try and not pay people for work already done over this, that’s a whole new level of terrible.) 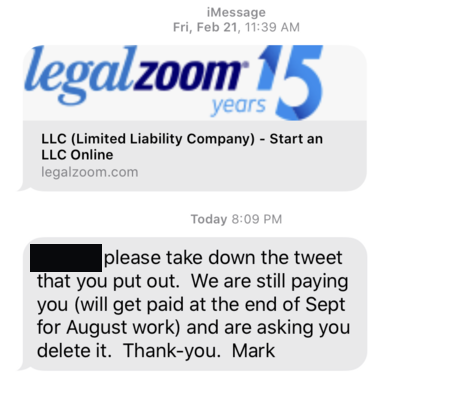 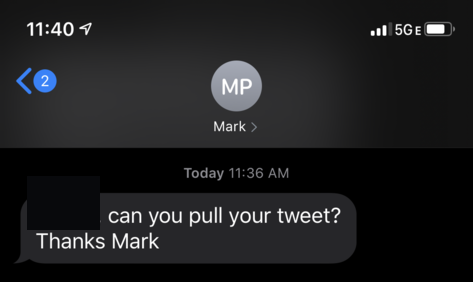 (It’s also notable that the first text also includes a text from February about how to set up a LLC. Maven has instructed their various publishers to do this. That not only limits liability for Maven, but also means that they perhaps have less exposure to lawsuits like the SB Nation one from people who work for them but are not receiving compensation or benefits near the level of “employee.”)

It’s egregious and outside the norm to see a company trying to tell laid-off writers to take down tweets about being laid off. At the moment, tweeting about being laid off is the primary way for writers to let others know that they’re available for future assignments or jobs. And continuing to pay these publishers and writers for a while is no excuse for issuing these kinds of demands. For one thing, AA has received confirmation that these laid-off writers were instantly locked out of their sites’ content management systems, so it’s not like they’re continuing to produce work for SI/Maven.

For another thing, while Maven is continuing to pay these writers for their past work (on a full one-month delay, which is itself remarkable and problematic), they’re not paying them for new work. These writers are not being given further work by SI and Maven. And countless writers at other companies have tweeted about being let go while still receiving settling-up payments, and there haven’t been a lot of objections to that from the companies they worked for. So Maven’s stance here is quite unique, and quite bad.

And it’s not like the tweets in question were even bashing Maven. They were factual statements about the layoffs, with many expressing thanks to Maven for the opportunity, and tags of other affected writers who had written for the impacted publishers. And they weren’t even from the SI-branded team channel accounts, but rather these writers’ personal accounts. So it’s remarkable that a Maven executive appears to feel that former writers and publishers shouldn’t be allowed to tweet factual updates that the company has decided to part ways with them.

And it’s also strange that Pattison handed out those demands via grammatically-incorrect texts with phrases like “are asking you delete it” (missing a “to”) and “thank-you” (with an egregious hyphen). Grammar isn’t always the biggest thing in the world, but those obvious mistakes from someone who’s a major executive at one of the most prominent sports media brands out there seem to add to the overall callousness and carelessness here.

And at that point, it’s worth taking a look at Pattison himself. The 58-year-old Pattison played four seasons in the NFL (from 1985-1988) as an seventh-round pick out of the University of Washington (it’s notable that he played for head coach Don James; Maven CEO Jim Heckman was James’ son-in-law, and was linked to several recruiting scandal allegations at Washington in the early 1990s). But as per his LinkedIn, his past jobs include co-founder of Front Porch Classics (a tabletop game company), founder and CEO of The Pattison Group (“a branding merchandise company”), senior vice president of business development at Scout (also run by Heckman, before the controversial Russian-investor-blaming way that ended), and co-founder/CEO of brand advising “Maverick Consulting Company” before he took on his current Maven role in October 2016. So his media experience is solely with Heckman companies, and on the “business development” or “partner development” side. And it’s remarkable that he (rather than anyone from the editorial side) was the one who tried to get laid-off writers and publishers to take down tweets about being laid off.

Pattison’s whole involvement here is interesting, also considering that he didn’t come off as the greatest representative of the corporation. Beyond the insanity of asking for these tweets to be taken down in the first place, his texts there were full of non-sentences, missed hyphens, and added hyphens. And that pattern carried on in the form emails he sent out to inform these writers and publishers that they were being let go. Here are three of those emails, again with names blacked out, and with Pattison’s own phone number blacked out. 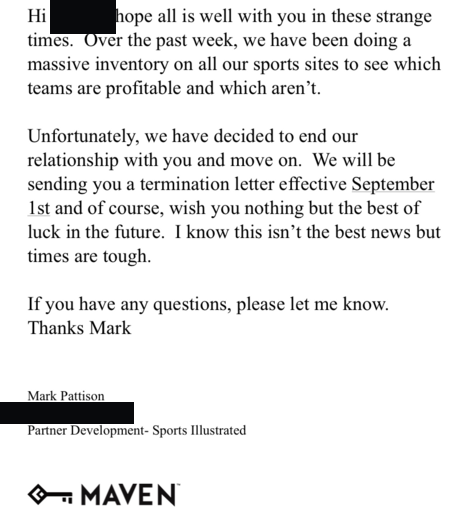 Yes, plenty of companies have laid people off via e-mail, and sometimes even via only-slightly-modified form e-mails like this. But this is still a poor way to conduct a layoff, especially with the substandard grammar (“Thanks Mark”) and the lack of commas and punctuation throughout. And AA has learned that several of the affected sites weren’t at the particular bottom of the internally-shared traffic metrics, so even the “massive inventory” of “which teams are profitable and which aren’t” isn’t really a full explanation of what happened here.

And this then gets even stranger when you consider that Pattison, who didn’t act terribly professionally throughout this (especially if you’re only laying off five publishers, why not give them each a call? Or at least a more personal e-mail, or at least one without egregious grammar mistakes?), was the one texting laid-off people. And he was doing so to ask them to take down their fully-professional tweets about being laid off. At any rate, these details add to a strange situation, and it adds to the many, many criticisms being lobbed at Maven over their stewardship of the Sports Illustrated brand.