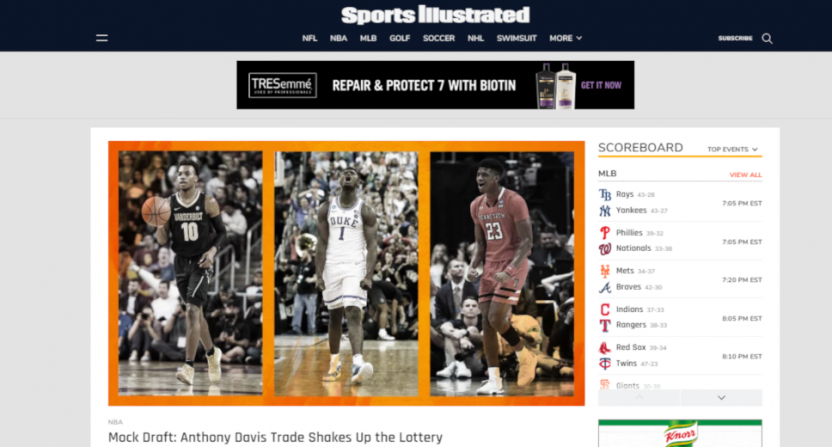 It turns out that Sports Illustrated buyer Authentic Brands Group, which paid around $110 million for the company back in May, doesn’t actually want to run the magazine and its associated digital ventures (SI.com, SI TV, etc) themselves. Part of that May deal saw previous owner Meredith paying a licensing fee to keep those properties going for at least two years, but that’s now changed; Keith J. Kelly of The New York Post writes that Authentic has now sold print and digital publishing rights for SI to The Maven.

The Maven is an editorial startup founded in 2016 and launched in 2017 by Jim Heckman (previously of Scout, but also known for work at Rivals, Yahoo, and other companies). Ross Levinsohn, most recently head of operations for Tribune Publishing (he left that role in January as part of wider Tribune changes; that role also came following a short-lived stint as publisher and CEO of The Los Angeles Times, which ended with him taking an unpaid leave of absence following allegations of past sexual harassment) and someone who previously worked with Heckman at Yahoo and has been on The Maven’s board, is now going to be CEO of the SI media line.

Authentic Brands Group — a licensing firm headed by Jamie Salter that acquired the venerable brand late last month from Meredith Corp. for $110 million — has turned around and sold its print and digital publishing rights to The Maven, a small publicly traded startup.

The two companies will be partnering in building the brand worldwide. ABG will pay Maven a share of revenues relating to certain Sports Illutrated business lines, such as commerce.

…Under terms of the latest deal for SI, revealed in an SEC filing on Monday, The Maven has prepaid $45 million to ABG against future royalties under a 10-year licensing agreement with guaranteed yearly minimum royalty payments, according to an SEC filing Monday.

Kelly also notes that Meredith was set to pay Authentic $10 to $15 million a year to keep operating the media side of SI, but that seems to be nullified by this deal. The Maven and Authentic are in talks with Meredith about continuing to operate parts of the SI business (including printing and distribution), but nothing is settled there yet. Authentic also gains some stock in The Maven as a result of this deal.

This move definitely confirms that Authentic’s more interested in SI for the name and what they can do with it than for the publishing operations (and they’re not the first there; past plans to buy SI also featured that strategy). It’s also notable that The Maven comes in here after previously partnering with Junior Bridgeman on his unsuccessful bid to buy SI; they clearly have a fair bit of interest in the property. That fits with what appears to be a further push into sports from them; they’ve recruited publishers from a wide variety of sites, from Chess Daily News to The Weed Blog to Blue Lives Matter, but a lot of their most recent additions are in sports, particularly with sites focusing on particular college football, NBA and NFL teams. (However, they’ve also bought other significant sites outside sports, including Jim Cramer’s The Street.)

Speaking of networks that include team-specific sites, FanSided wasn’t part of the SI sale, but Meredith is looking to sell it separately. Kelly writes in another piece that bids there are due this month, with the company looking for around $30 million there. But SI itself is already headed to new management, and it will be well worth watching what happens with it under The Maven.