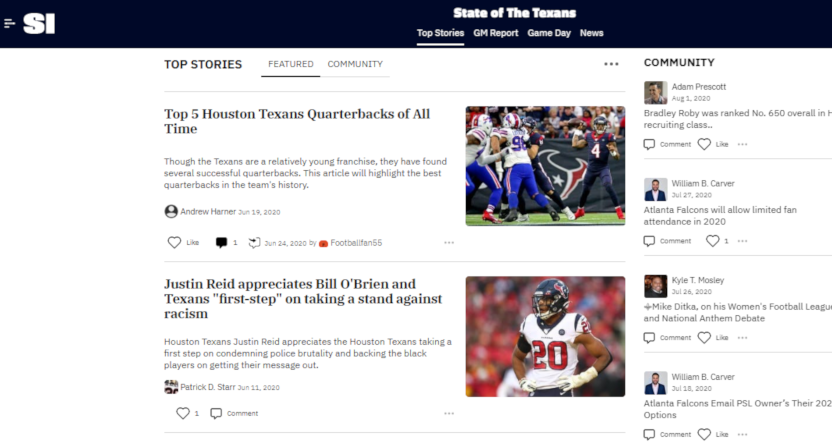 There’s been plenty of discussion of Sports Illustrated operator Maven over the last while, including our report two weeks ago of Maven executives repeatedly suggesting to SI/Maven channel publishers that those publishers should boost the engagement on their sites’ community tabs, including by creating fake accounts if needed. There have been other concerns raised about Maven management, including salary reductions, their partnership with a “Blue Lives Matter” website, the outlet’s financial stability, firings, and layoffs. But an interesting one we first became aware of while reporting on the fake accounts is that two weeks ago, Maven asked publishers to undergo a criminal background check, a request they hadn’t made before and which they hadn’t provided warning of. And it turns out that this push for a background check came shortly after Maven appears to have quietly parted ways with Houston Texans’ writer “Patrick D. Starr,” who appears to be Patrick Edward Colon.

Back in 2008, Colon, then 29 and a former high school teacher/coach in Schulenberg, Texas, pled guilty to two counts of improper relations between an educator and a student. He served probation for that. And Awful Announcing has obtained an internal Maven email from Glenn Nelson (senior vice president, network and editorial development) from April 28 saying “Here is the story about Patrick Colon (known as Patrick Starr with us),” linking the above 2008 Victoria Advocate story on Colon, referencing a SI addendum signed by Maven affiliates and its morals clause (2. Partner Behavior), and adding that “assuming the details come back as we suspect, we propose to send him a mutual termination with a continue payout through July.”

That email deserves further discussion. It is titled “Hi Amy,” and references a previous phone call. It appears it was meant for Amy Larkin, Maven’s director of human resources. But it was actually sent to several groups of Maven team site publishers. Nelson then followed that email up with a response to the group of NCAA publishers, saying “I apologize. I was trying to do too many things at once. Please disregard and remember that our internal emails are confidential.”

What exactly has happened with Starr since that April email? Well, his Twitter bio still states “Covering the Houston Texans for http://SI.com Maven + ITT SportsTalk790 @SOTTexans,” but his SI.com profile has no new stories since June 11. That’s notable considering how he posted multiple articles on most days in May and June. And since June 11, State of The Texans (seen above) has only had five stories posted, all by Andrew Harner, and all just lists (best quarterbacks, receivers, running backs, wins, and players in Texans’ history).

But as Maxwell Tani of The Daily Beast noted in a larger piece Monday titled “The Civil War Tearing Sports Illustrated Apart” (also linked above), Starr’s name did appear Friday in a “Inside AFC South: No. 1 Camp Battles” piece published on the All Colts Indianapolis Colts channel by Phillip B. Wilson. That piece included comments from SI/Maven writers covering each other AFC South team, including “Patrick D. Starr, State of The Texans.” And Maven didn’t exactly give Tani much when he asked for comment on Starr’s status. But the Texans had a little more to say on him:

Starr declined to comment. In a statement to The Daily Beast, a Maven spokesperson said the company “began investigating as soon as we became aware of a question around him.” The organization did not answer follow up questions about whether he would continue to write under the Maven and SI banner.

The writer’s past has also alarmed at least one team that he covers for the NFL. “I was recently made aware of a disturbing report about a member of the media who covers our team,” Houston Texans VP of communications Amy Palcic said in an email. “We are in the process of confirming the validity of this report and gathering all pertinent information.”

It isn’t clear how that 2008 story on Colon came to Maven’s attention. Allegations that Starr is Colon had popped up on Reddit before this April, though. Back in March 2018, Starr was in a car crash that killed his father and badly injured him. That crash led to a memorial fund for Emilio Colón that raised $29,000. Starr posted a photo of himself recovering to Twitter a month after that, and that received discussion on the Texans’ subreddit.

And that led to someone commenting “Isnt his last name “Colón”? Must go by Starr due to the infamous Patrick Colon.” That didn’t receive much attention at the time, but last year, user @marfatexas123 replied to that old thread with “His last name is Colon. He goes by Starr due to the following. Please ask me if you have any questions. I’m an open book on the case.” and added a link to the 2008 article.

That comment has been deleted from the thread, but can be seen on that user page. That user page also has a long and detailed comment alleging that Starr is Colon and discussing Colon’s criminal history in response to a Reddit discussion of Starr’s start-of-training-camp post last year. That comment has also been deleted from the thread (which is just people talking about enjoying Starr’s work), but is still on that user page. It says that two of Colon’s victims slept on the poster’s floor in college because they were too scared to be alone, that “1 of your victims was a relative of mine, 15 years old, too scared to speak out,” and goes on to say that pressure is coming for Starr.

It should be noted that Maven/SI is far from the only place Starr has appeared. He was running StateOfTheTexans.com before he brought it to Maven in late 2018, and he also appears to have written original pieces (which are still up) on Houston sports radio station Sports Talk 790’s website back in 2017. That website also syndicated a lot of Starr’s more recent work with bylines of “By Patrick Starr, StateOfTheTexans.com.” Starr was also accredited to cover the Texans in person (although his work as a media member isn’t without its detractors; AA has heard stories of him taking others’ reporting as his own without credit). So Maven didn’t bring him on him out of nowhere, but if the Starr/Colon connection is accurate, there are obvious concerns with having that person represent your brand, and also with him doing so under an alias.

Of course, criminal background checks on new employees are far from universal across the sports media, and Maven’s move to bring people on without them (until now) isn’t unprecedented. And they’re far from the only place to hire people with problematic pasts, or people who then do problematic things. And implementing those checks now should avoid some issues for them in the future.

But it’s certainly interesting to see those background checks brought in now, shortly after what appear to be Starr’s last articles on their site, but months after high-level executives were discussing the Starr/Colon connection. And this also comes amidst the context of the larger issues playing out at Maven/Sports Illustrated, as Tani discusses, and amidst the previous issues with bad behavior and bad reporting from SI/Maven channel operators. And there’s still a fair bit of uncertainty about how Maven has actually handled Starr’s exit, if it is indeed an exit.