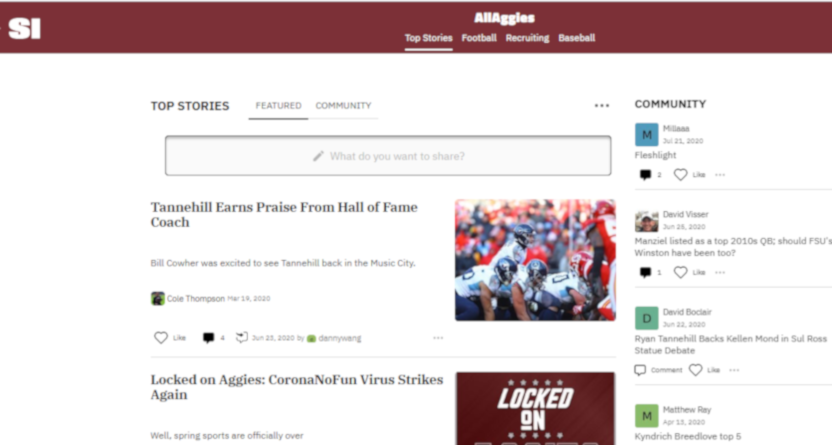 While Sports Illustrated made news earlier this week for a move by owner Authentic Brands Group to launch a line of SI-branded nutrition supplements, including a “brain formula,” they’re now in the news for a move by an executive at operator Maven. Multiple sources told Awful Announcing that Scott Kennedy, Maven’s general manager (sports), has told channel staffers to get conversations in the “community” tab of their channels going, and create burner accounts under fake names to do so if necessary. As per the sources, Kennedy has suggested multiple times that writers create burner accounts under fake names to post in the “community” tabs on their sites.

The sources said Kennedy most recently made that suggestion on a Zoom call Wednesday with Maven executives and Maven/SI team channel staffers. Another source told AA this has been a push for over a year, with writers asked to create multiple burner accounts. And that source confirmed that some burner account comments actually were published on team sites.

It’s certainly not a great look for a media executive to suggest that writers create burner accounts to post comments on their own site. While there can sometimes be merit to comments made not under a real name, having someone who writes for a site comment there under a different alias to make the site’s community section look more lively is deceptive. Engaging under a fake name with something you’re directly involved in under your real name has caused a lot of problems for a lot of people. And a suggestion that writers should create burner accounts to comment on those sites certainly wouldn’t help with the credibility of these sites, some of which have already been under fire for bad reports and bad actors.

This fits into wider concerns about Maven’s approach to the team sites. One source told AA “It’s a mess over here.” Another said “They have been downplaying every hiccup (of which there are many) and simply blame us for every issue. As one fellow Mavenite accurately told me a few minutes ago, all they do on these calls is tell us how we’re all failing.” The calls have also included pushes for writers to make multiple videos per day. But the suggestion that writers should create burner accounts to increase the commenting activity on their sites in the community tab is particularly unusual, and particularly worth exploring.

Why is Maven trying to push this kind of “community” tab engagement, especially to the degree of encouraging writers to create burner accounts? Well, the seeming philosophy would be to increase traffic to the team sites from people looking back to see if anyone responded to their comments. And comments with a good actual community have been a strong driver of traffic at many sites, from old-school Deadspin to some of SB Nation’s team sites.

Even comments with less quality but a lot of back-and-forth engagement can pay off. People always complain about college football message boards, but those message boards have been a key part of what’s made recruiting-focused team-specific sites like those with Scout, Rivals and 247 work. And it’s worth keeping in mind that many of the people involved with Maven come from a recruiting site background, including Maven founder and CEO Jim Heckman, known for his past at Rivals and Scout. So these kinds of approaches have sometimes worked in the past. But comments sections and message boards are a harder sell in today’s era of social media discussions, and many of the community tabs on Maven team channels are pretty dead.

The most remarkable example we came across in a look at a number of these “community” channels Wednesday came from Texas A&M site AllAggies, seen at top. That site’s “featured” tab (where the actual articles normally go) hasn’t been updated since March, and Cole Thompson, the writer for every featured article listed there, is now at the Pro Football Network (as per his Twitter bio). The “community” tab has seen some more recent posts, but many of them are obvious cross-posts from writers at other sites. And then the most recent comment is a spam one promoting Fleshlight sex toys, which has been live on https://www.si.com/college/tamu/ for eight days as of Wednesday. (Update: It was finally deleted as of Thursday.) Here’s the community tab overall (click any of these screenshots to expand them):

Yes, that’s exactly the content you’re expecting to read on SI.com. (Although with SI-branded nutritional supplements now, perhaps SI-branded sex toys aren’t far off.) And yes, this is a corner of SI.com no one is probably looking too hard at; strangely, many of SI’s team pages don’t even redirect to the Maven team channel, with many like the Texas A&M link just including the team’s 2019 schedule and results (with “recap” links that redirect to a dead si.com/soccer/game page). And with no new actual articles there and no promotion of new articles, people aren’t getting to AllAggies unless they Google something like “SI Texas A&M.” But it is interesting that there’s this corner of the SI/Maven channels that’s all but abandoned, except for cross-posts from other site writers and Fleshlight ads from spammers.

And things aren’t that much better in the community tabs of many of the channels that do have active writers producing new content. Sticking with college sports, a more typical and less-abandoned example comes from CalSportsReport, where writers Jake Curtis and Jeff Faraudo are covering the California Golden Bears. But their community page features only contributions from them, the same as the feature page with actual articles.

What about CowboyMaven, a Dallas Cowboys site run by veteran beat writer Mike Fisher, who Maven regularly cites as one of the contributors proving their team sites can be trusted? Well, there are plenty of good featured articles there, but even there, the Community tab is pretty similar. It’s some comments and links from Fisher and some cross-posts from writers from other NFL sites, including team sites for the Saints and Falcons. And the cross-posts don’t even seem too relevant to the Cowboys.

And it’s a pretty similar story at many of the other channel sites across many different leagues. Most of the “community” hubs are pretty dead, with the only people actually engaging there being the site writers and other Maven writers posting links from their own sites. Interestingly enough, the Manchester City one, City Xtra, has some comments from Kennedy:

With these levels of engagement in the community tabs, and with those sections showing up on the main page of these channel sites, it’s somewhat understandable why Maven wants to push for more engagement in those sections. As it stands, these sections aren’t great, and the way topics there even show up off to the right when you’re looking at “featured” (or actual articles) isn’t ideal if they don’t have much good content there. But pushing writers to create more engagement there is far from ideal, and suggesting that they should create burner accounts to do so is a step further still.