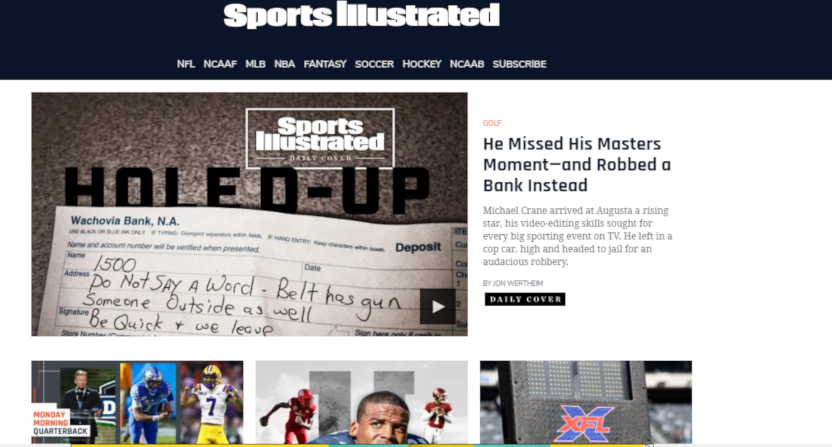 Amidst the economic uncertainty of COVID-19 coronavirus lockdowns and the lessened advertising and subscription revenues as a result, plenty of media chains have implemented cost-cutting measures. Gannett (the largest U.S. newspaper chain following their late-2019 merger with Gatehouse) announced week-long rolling furloughs for reporters and editors (as well as pay cuts for executives) Monday, and Maven Media (which operates Sports Illustrated and owns The Street and countless other titles) announced their own cost-cutting measures later Monday, including a big impact at SI. Sara Fischer of Axios has more on that:

Just announced: Maven Media, which owns Sports Illustrated, TheStreet, says it will implement a "broad cost-containment initiative," including a 9% staff layoff. (6% of the editorial department of Sports Illustrated.) Says it's anticipating $30 million revenue loss for 2020

That’s certainly significant, especially considering how October already saw SI lay off half its staff and that the magazine has already cut back to one print issue a month (with each issue closed three weeks in advance). And some notable people have already announced that they’ve been caught in this round of layoffs, including senior writer Chris Ballard, long-time SI editor/producer Tom Mantzouranis (most recently senior producer of video strategy), and editor/writer Jack Dickey:

After almost 20 years, today is my last at Sports Illustrated. Hell of a ride. I got to work alongside childhood idols, collaborate with some of the best editors in the business, and live out a dream. Best job in the world, I always said, and it was. A few thoughts: pic.twitter.com/oOpWvWEJVl

Well! After 9 years, today was my last day at SI. And I can't even get drunk with my now-former co-workers. While it's never fun losing a job, it is a bit of a relief at this point. Though the last few months have been pretty brutal, I will focus on the good of my time there.

After nearly seven years and a bunch of wouldn't-trade-em-for-anything experiences, I got let go today by Sports Illustrated. If you're in the market for editing, writing, U.S. Senate trivia, etc., please be in touch at jackdickey@gmail.com.

Sports Illustrated was always my dream. I was excited and proud to work there–especially as an intern 10 years ago!–alongside writers and mentors I admired. Sadly, I was part of yesterday's layoffs. While I wish my time at SI had been longer, I'm so grateful for the experience.

After nearly 13 years, I’ve been told tomorrow will be my last day at Sports Illustrated. At the end of it all, I feel lucky to have called SI my only professional home. …

After nearly 5 yrs (& an internship), I got let go today at @SInow. I’ve enjoyed every second of it (except for the mock drafts). Here’s a photo from my fav assignment- track a cow on its way to a football. We really did that! If you happen to be hiring during pandemic, email me! pic.twitter.com/ZXhHFlFzL6

We’ll add more people affected by these layoffs to this post as we see them; reach out to @awfulannouncing or @andrewbucholtz on Twitter. Our thoughts are with all those affected.