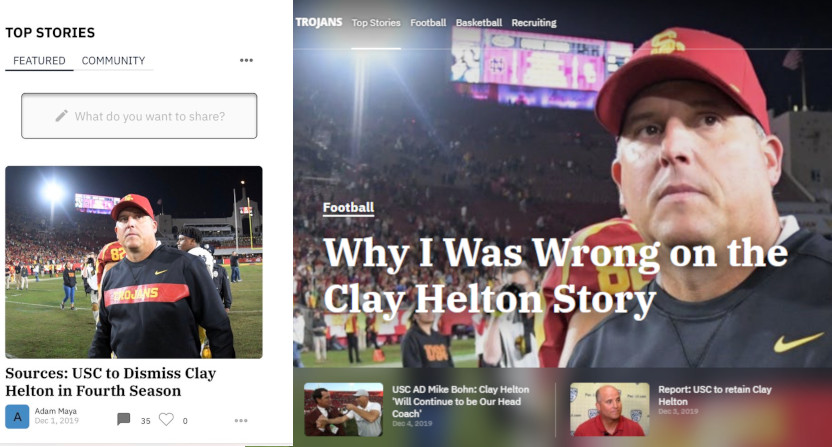 On Sunday, Sports Illustrated featured a report from “USC Maven” Adam Maya (one of the team-centric independent writers featured on main SI channels as part of new operator The Maven’s business plan) on their website and social channels, with that report stating that multiple sources had told Maya USC was going to fire football coach Clay Helton. Actual SI staffer Pat Forde posted on Twitter later Sunday that multiple sources disputed Maya’s report and said no decision had been made, and other national reporters put out similar reports, leading to SI running a “staff report” that mentioned the sources disputing Maya’s initial report, but they didn’t change the original piece or take it down.

Then, on Wednesday, after USC officially announced that they were in fact keeping Helton, Maya’s initial piece was finally scrubbed from the internet and replaced with an apology from Maya and a discussion of what went wrong. But that didn’t happen immediately. As many noted, there was a while where the SI USC team page (it’s since been changed) featured the actual news and then the incorrect report, both on the main website and on mobile. Here’s what that looked like on the main website Wednesday afternoon: 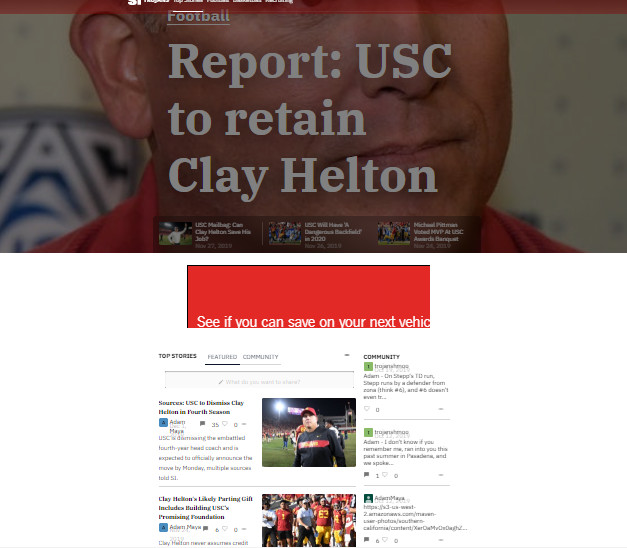 Wel it’s official: SI has become a complete and total joke. These are the top two articles on their USC page, back to back. @BarstoolSC @awfulannouncing @Theoldp @uscpsycho pic.twitter.com/uQ2QijzYZL

This isn’t the only weird and/or anachronistic thing with SI team pages. For example, their general team landing page still (as of Wednesday night) features a “Latest” section of videos on the right, with two of the top three featuring Mark May for some reason. The second of those is May proclaiming that Urban Meyer to USC is “a done deal,” something that held up about as well as the usual comments from May. Both of those May links go to SI URLs posted on October 4 that now produce 404 errors. Here’s what that part of the page looked like Wednesday:

But that’s a little less big of a deal; that’s hardly the “latest from NCAAF,” or anything you should be featuring in the first place, but it’s a video list on what’s probably a seldom-used page. By contrast, Maya’s story was rolled out far and wide across SI’s platforms, which is why it became so notable. And it’s good that it’s finally been corrected with an apology; here are some key elements from that:

I was wrong, and I am sorry.

Those seven words cannot exonerate me from the mistake I made this week — incorrectly reporting Clay Helton would be fired — but I felt they were the first that belonged in this statement.

I know many are wondering how I came to write my initial story Sunday that Helton would be dismissed. If you’ve followed my work, you know it’s a situation I’ve been tracking the entire season. Fast forward to this past weekend and I was told by multiple sources that USC had decided to make a coaching change. These same sources had alerted me to three developments in the past — athletic director Mike Bohn’s hiring, Bru McCoy’s transfer back to USC, and Graham Harrell becoming the offensive coordinator.

I’m not going to out my sources — this is my sword to fall on — but essentially there was a misunderstanding on their end as it pertained to Helton’s status. They confused certain actions by Bohn and their superiors at USC, particularly in the previous week or so, to mean Helton was definitely being fired, when in actuality keeping him was still under consideration.

As a result, a coaching change was inaccurately characterized to me as being a formality rather than, as was later explained to me, conditional. If I had known the latter, I would not have filed my report in such terms. Given my sources’ track record, I had no reason to think their intel in this instance was incomplete. I fully believed in what I reported, which is why I was so definitive. Alas, I made a major error that assuredly caused great pain to a coach I couldn’t respect more as a person, and his family.

Look, erroneous reports happen at all publications. Some of the best journalists make mistakes from misunderstanding sources (see Bob Woodward and Carl Bernstein’s discussion of misunderstanding if H.R. Haldeman was mentioned before the Watergate grand jury). And in this case, the error on Maya’s end isn’t even misunderstanding sources, it’s the sources being wrong. But when you use anonymous sources, you’re replacing their credibility with your own, and these sources apparently weren’t in a position to know what was actually happening, so running a report as definitive as “USC to dismiss Helton” based on that was certainly a mistake from Maya.

But mistakes happen, and they often happen around coaching changes, especially in fluid situations. And sometimes the situation actually changes based on reaction to what’s reported, as appears to have happened with Les Miles’ firing/not-firing at LSU in 2015 and what happened with Greg Schiano’s recent hiring/not-hiring/hiring at Rutgers. That doesn’t appear to be quite the case here (the evidence suggests that USC decision-makers really hadn’t come to a consensus on Helton at the time of Maya’s report, not that they’d decided to fire Helton and then changed course), but a misstep on a coaching hire wouldn’t necessarily be huge news in its own right.

This was a notable mistake, though, especially because of how much play Maya’s initial story got (thanks to it being pushed across SI’s channels), and because of how much focus there currently is on how the SI/Maven setup will work. And SI/Maven made this much worse with the delay in retracting and correcting the first report; yes, they ran the aggregated reporting disputing it in a separate post, but they didn’t alter that initial story until Wednesday, long after it had been proven inaccurate. And that’s a problem; yes, more people were going to see the newer post with more accurate information, but just keeping the older one around unaltered was a bad look, and not great for anyone who stumbled on that post instead of the wide internet refutation of it.

Every organization makes mistakes, including the old SI, but a key part of that is how they handle their corrections and updates. Some handle it well, and some do not. Maya’s eventual apology is good, and it’s appreciated that he spells out what went wrong here, but it shouldn’t have taken this long for that inaccurate report to be corrected.