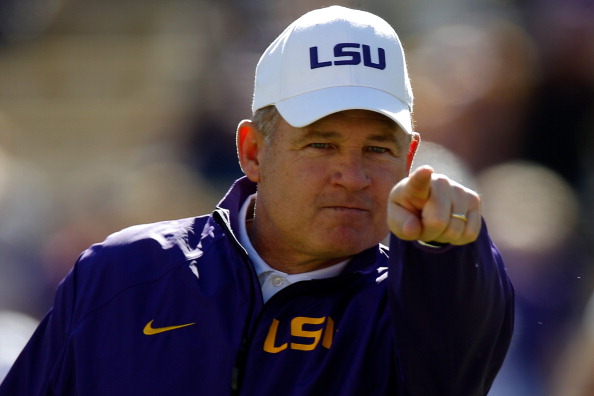 LSU head football coach Les Miles performed one of his greatest escapes ever Saturday, being confirmed as the school’s football coach going forward after players and fans stood up for him despite weeks of leaks from administration that he was going to be fired. That’s not just a college football story; it’s a media story, and a key example of how anonymous leaks to the press can go wrong. The goal of the various leaks about Miles’ upcoming firing was presumably to try and pave the way for a coaching change, but the administration so badly miscalculated the response from fans, players and the public that those leaks actually played a big role in him keeping his job (and resulted in many calls for the head of athletic director Joe Alleva), at least according to yet another anonymous leak to ESPN’s Joe Schad Saturday night:

Decision to retain Les Miles was made in meeting of LSU decision makers during 3rd quarter of tonight’s game, per source

LSU decision makers felt media had swayed public and if Les Miles was fired school would have apoeared mean-spirited, per source

It’s hilarious that a big school is making decisions on the basis of “will this make us look mean-spirited?” and also figuring that media had “swayed” the public (fans can think on their own, and plenty of fans hated this idea long before reading anything from media), but those tweets really showed how the decision-makers’ plans went wrong. Planting information that Miles was going to be fired (and doing so even before the team’s loss to Arkansas two weeks ago) created the exact opposite effect they’d hoped for. That illustrates how they misjudged the support for Miles and the job he’s done at LSU, but it also shows the folly of trying to conduct business like this through long-duration media leaks. Most coaching change stories play out relatively quickly, and near the end of the season; letting a coach twist in the wind the way they did with Miles helps even further with creating sympathy and trying to save his job. As Dennis Dodd wrote, too, Alleva and the other officials really didn’t have much a plan in place for where to go next:

What a spectacular miscalculation. What disarray. What a joke. What a time to be Joe Alleva.

Florida State’s coach ultimately wasn’t enticed to come to LSU, so life goes on in Baton Rouge. Well, as much as it can in a world where Alleva had Miles run out after 11 years without much of a succession plan.

See, that’s how these things work. If you’re going to fire a highly successful coach, you sure as hell better have the next guy locked up.

Turns out Alleva really had no idea what he was doing.

Now who deserves to be fired?

The other key point to focus on here is what these leaks did for LSU’s executives. Every source has an agenda of some sort, a reason for talking. That’s particularly important to consider with anonymous reports; who wants this information out there, and why? With the Miles leaks, that was pretty clear; administration officials trying to pave the way for his firing. The backlash and the response shows how the inverse also needs to be considered, though; officials pondering leaking a story need to think about the impact that information’s going to have and the potential responses it could create, not just the response they’re hoping for. The LSU officials who leaked this accomplished an outcome they didn’t want, and they managed to make themselves look utterly incompetent in the process.

The Saturday night leaks to Schad are further evidence of how and why not to leak something. Those came out very quickly after it was announced that Miles was staying (to a whole bunch of glares from Alleva, centre in dark suit and purple tie, and other officials):

What conceivable reason is there to tell Schad this stuff, especially right after the decision comes out? The source is presumably an LSU official who was in on the meeting, but the revealed information doesn’t paint those officials in a good light at all, suggesting that they only made their decision during the third quarter and that they only did so because of public backlash. The timing was also brutal; leaking that information the next morning might have received a better sober second thought response (although the officials still would have looked bad from it), but in the moment, when Miles’ countless supporters were still exuberant? It created a huge amount of mockery and backlash, as the responses to Schad’s tweets (which resulted in a whole lot of blocks, funnily enough) illustrate.

The media leaks both before and after the decision were far from the only problem with LSU management’s handling of the Miles saga (it’s pretty incompetent to even consider firing a national championship-winning coach who had his team ranked #2 overall, put up a 8-3 season despite substantial adversity, and has the top-ranked recruiting class coming in), but they illustrated how out of touch management was with how this information would be perceived. They’re an excellent case in point as to how not to run a top athletic program, and they may be part of substantial change at LSU. Beyond that, though, these leaks and the way they backfired provide a crucial lesson for all sports executives; look before you leak.